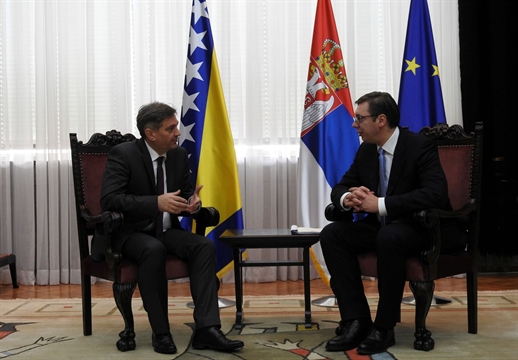 Zvizdić said that the preservation of peace and stability in the region is a priority in relations between Serbia and BiH, but also of the entire region.

After his meeting with the Serbian Prime Minister Aleksandar Vučić, Zvizdić said that BiH and Serbia have the same political priority – membership in the EU, and added that Serbia can help BiH by transferring her knowledge and experience.

Zvizdić announced that there will be more meetings and visits this year than before “because there are a number of important topics for BiH, Serbia and for the region for which it is necessary to meet more often.”

He said that BiH and Serbia agree that “dialogue and discussion as a means to find solutions only instrument for the improvement of relations”.

Zvizdić also added that for the two countries are the most important further development of economic relations and that he talked with Vučić about infrastructure projects, traffic connecting Serbia and BiH, Belgrade and Sarajevo, but also on cultural and technical education and educational cooperation.

Chairman Zvizdić said that nobody in BiH is happy because one of the most powerful countries imposed sanctions on one of the leaders of the largest parties, but also that it is a good message and a lesson for everyone about leading anti-Dayton activity.

“There is no indication of an institutional domination of one people. Any indications that are focused on the status of the RS have no foundation in arguments and activities of any institution. We respect the Dayton Accords, the BiH Constitution. Within it are two political subdivisions, entities and anyone who is constantly working on threats to these goals of course that he will experience the status of sanctions, as is the case with Milorad Dodik explained Zvizdić.

Serbian Prime Minister Aleksandar Vučić said he did not want to criticize Dodik in front of representatives of Sarajevo, but sometimes he does not agree with his views.

Serbia will not join sanctions because they do not bring any solution and, secondly, because of the decision of the Serbian Government and Serbian people never to put blocks on the Drina river.

“We do not want to interfere in the internal relations in BiH“, Vučić said.

Ministers of Foreign Affairs of Serbia and BiH Ivica Dačić and Igor Crnadak assessed in Belgrade that relations between the two countries are good and that we should continue to work on resolving outstanding issues, including the particularly important ones, like defining the inter-state border.

As the Ministry of Foreign Affairs of Serbia announced, Crnadak and Dačić assessed that previously a significant progress had been achieved in resolving of outstanding issues, as is the case with the activities of the completion of the process of succession of diplomatic and consular property of the former Yugoslavia.

They agreed that in the next period it is needed to continue and intensify mutual contacts at the highest political level and to give additional impetus to the expansion of the overall cooperation.

The need for resolving outstanding issues was also emphasized, and in this context it is particularly emphasized defining the final border line.

“Serbia and BiH agreed that the highway Belgrade-Sarajevo should be built, and in the coming period we will talk on the details of implementation, such as the preparation of preliminary feasibility studies and ways of financing,” said Mihajlović.

Jusko added that this project is important for faster economic development of BiH and that he expects that in the next month is a preliminary route of the highway on the territory of BiH will be known.

Mihajlović and Jusko agreed to form a joint working group soon as possible, for the project of reconstruction of the Belgrade-Sarajevo railway, which will consider the issue of faster movement of goods on railway border crossing between the two countries.

At the meeting held in the framework of the visit the Chairman of the Council of Ministers (CoM) BiH Denis Zvizdić, a formation of a working group has been agreed by Serbia and BiH to deal with the question of maintaining the bridges that connect the two countries, and there are a total of 11 of them.

Mihajlović and Jusko also talked about the preparation of the agreement on the construction and establishment of joint border crossing on the bridge Ljubovija-Bratunac and on cooperation in the field of air transport.

A more intensive cooperation was also agreed between the two ministries in the fight against the gray economy in the area of road transport of passengers.

These meetings were held for the goal of cooperation improvement  withing the above sectors.

Afterwards, the Prime Minister Vučić hosted the guests from BiH on a working dinner and the official visit will begin tomorrow with the welcome of BH delegation in front of the Palace of Serbia.

As a reminder, Ivica Dačić met the Chairman Denis Zvizdić and delegation today at “Nikola Tesla” international airport in Belgrade.

In an informal conversation, both sides expressed their satisfaction with the visit to Serbia, as well as the willingness to openly discuss all issues of mutual interest with a view to the stable future, announced the Ministry of Foreign Affairs of Serbia.

Vučić said earlier today that they will discuss important issues for the two countries, stressing the importance to talk about the future together.