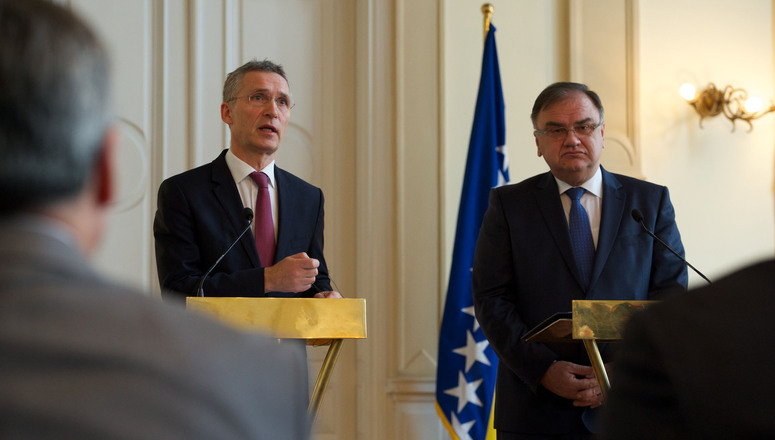 SARAJEVO – The Secretary General of NATO Jens Stoltenberg praised the progress of Bosnia and Herzegovina in the process of joining NATO during his visit to Sarajevo, but also stressed that there is more to do.

“I would like to thank you for Bosnia and Herzegovina’s contributions to different NATO activities and operations and missions, especially in Afghanistan. We also appreciate your donation of ammunition to Iraq, helping to fight ISIL”, Stoltenberg said at the beginning of his address.

He said that BiH is a candidate for membership in NATO and have the necessary tools that can allow  it to progress.

“NATO is ready to activate the MAP, but when military assets are registered with the reforms in the security sector,” stressed Stoltenberg.

He added that the document “Defense Review” is step forward.

“I welcome the progress and strong commitment and I urge you to do even more. Through NATO BiH will be even closer to the EU. We want to help BiH implement defense review, but I stress that we support the territorial integrity and sovereignty,” said Stoltenberg.

The Secretary General also said that NATO has seen reports about “increased Russian influence” in the region, in particular about “Russian intervention in the political process in Montenegro” in 2016.

“We are following that very closely, we work with partners, including Montenegro, to help them strengthen their intelligence capacities and defense institutions,” Stoltenberg said.

He added that the best way to counter external influences was to ensure that “institutions in different Western Balkan countries are strong, modernized, and reformed.”