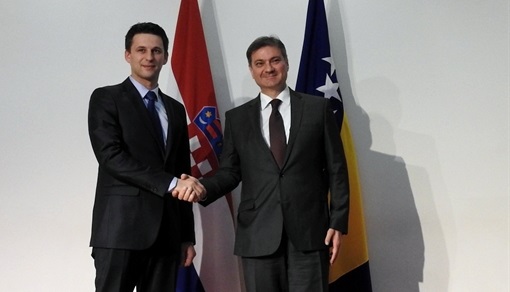 SARAJEVO – Chairman of the Council of Ministers of BiH Denis Zvizdić received yesterday in a visit a delegation of the Croatian Parliament, led by President of the Parliament Božo Petrov.

At the beginning of the meeting, Chairman Zvizdić congratulated to President Petrov for his appointment for President of the Parliament, wishing him success in his work. Chairman Zvizdić briefed President Petrov of the current economic and political developments in BiH, and thanked him for the transfer of knowledge and experiences from the European integrations area. He said that the European and Euro-Atlantic agenda of Bosnia and Herzegovina represents an important link in bilateral relations with the Republic of Croatia, and the member of both the European Union and NATO, and emphasised that these facts point at even more substantial and intensified cooperation, not only bilateral, but the one at both regional and global level.

President of the Croatian Parliament Božo Petrov said Croatia respects sovereignty and territorial integrity of BiH, as well as the equality of three constitutive peoples, and that it does not support the creation of the third Entity in Bosnia and Herzegovina. He said that Croatia is fully supportive of the European and Euro-Atlantic integrations of BiH, expressing his hope that it will join the European family very soon. He commended the economic progress of BIH, adding that it is important to continue cooperation in all segments.

Chairman Zvizdić and President of Parliament Petrov agreed that Bosnia and Herzegovina is a key to stability of the South-Eastern Europe. They also discussed the promotion of cooperation at infrastructure and energy projects, in fostering cooperation in economic, scientific, cultural and other areas, as well as on a joint session of the Government of the Republic of Croatia and Council of Ministers of BiH.