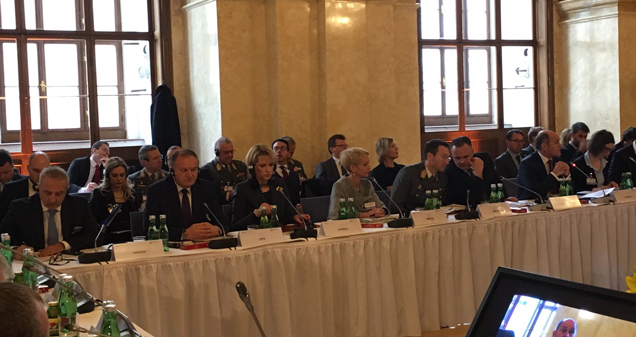 TIRANA – Defence Minister of Albania Mimi Kodheli affirmed Albania’s commitment to deal with illegal migration as she addressed a meeting of the defence chiefs of countries of the Central European Defence Cooperation (CEDC) initiative and the Western Balkan partner countries in Vienna, Austria, press service at the Ministry of Defence said to ATA news agency.

During the meeting that brought together the defence ministers of the member states of CEDC, Kodheli highlighted the importance of addressing the issue, saying “the illegal migration is increasingly becoming part our interstate agenda and will continue to be one of the challenges of the future.”

“Albania has joined the NATO-led maritime patrolling mission in Aegean Sea in coordination with the EU Operation Sophia, the European Border and Coast Guard Agency, (FRONTEX), Greece and Turkey to help in the efforts to prevent the migrants and refugee crisis,” ATA quoted Kodheli.

Defence Minister also highlighted the ongoing efforts to open a NATO excellence centre in Albania that will study and address the phenomenon of foreign terrorist fighters, saying the centre will serve to entire region.