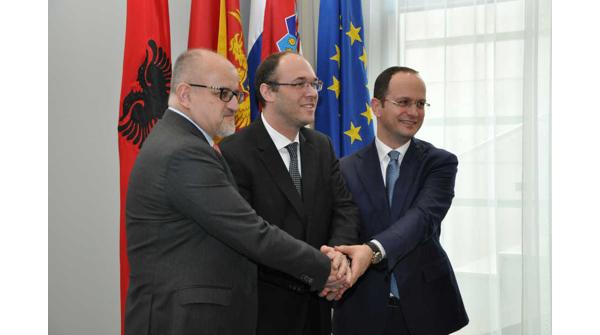 TIRANA – Foreign ministers of Albania, Croatia and Montenegro signed the founding document of the Adriatic Trilateral aimed to strengthen cooperation and partnership between the three countries, ATA news agency reported. Deputy Prime Minister and Minister of Foreign and European Affairs of the Republic of Croatia Davor Ivo Stier, together with the Foreign Minister of Montenegro Srđan Darmanović and Minister of Foreign Affairs of the Republic of Albania Ditmir Bushati, signed the document aimed at improvement of cooperation of their respective countries.

The Adriatic Trilateral is an initiative of the three countries aimed to serve as a platform to strengthen cooperation and regional stability, expand relations in the areas of integration, political dialogue and economic and security. In this context, the initiative aims to promote Euro-Atlantic and European integration processes in the region, as well as concrete ways of improving cooperation through economic, infrastructure, energy and cross-border cooperation projects.

The meeting focused on pressing security issues, ways to deal with terrorist threats in defence of common values and respect for fundamental freedoms and human rights, ATA reported.

In his remarks at the meeting, Bushati praised the consolidated cooperation under the trilateral format and reaffirmed Albania’s role in strengthening cooperation and partnership between the three countries in areas of common interest.

Minister Stier reiterated Croatia’s support for further progress of Montenegro in the accession negotiations with the European Union and Albania and opening of accession negotiations with the EU. He also expressed his support for a speedy accession of Montenegro to NATO and with colleagues Bushati and Darmanović agreed on the importance of cooperation within the US-Adriatic Charter in the field of defense, and military cooperation which will be a part of the Adriatic Trilateral’s work.

(Full text of the Joint Declaration can be found here)

Three chapters to be opened in late February or early March

Danielsson: It is imperative that the presidential pardons are withdrawn

EU strengthens its support to local governance in Albania