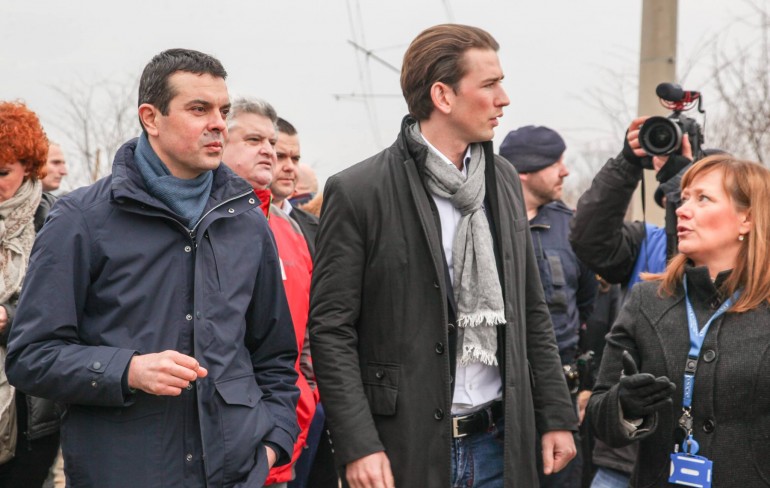 GEVGELIJA – The chief of Austrian diplomacy and chairman of OSCE, Sebastian Kurz, arrived on Sunday in Macedonia, and that afternoon, along with his host, the Deputy Prime Minister and Minister of Foreign Affairs, Nikola Poposki paid a visit to “Border stone 59” at the Macedonian – Greek border crossings, near Gevgelija, “Meta” news agency reported.

During the visit of Border stone 59, only Poposki gave a statement for the media, who stressed that Macedonia has played a key role in the prevention of illegal migration and the dealing with the migrant crisis.

“The cooperation that we realized with several EU members, including Austria, was probably the moment that has allowed Greece to better protect its borders. During that process, we had the worst experience in terms of cooperation between two countries, but we also had the best experience when that cooperation, today, helped to make Greece less attractive to and prevent an uncontrolled wave of illegal migration that was crossing through the Balkans”, “Meta” quoted Poposki.

Both ministers visited several locations for electronic surveillance in the area of Gevgelija including the contingent of Austrian policemen that are located in Gevgelija.

Poposki and Kurz didn’t visit the “Vinojug” camp where refugees and migrants are accommodated as they got delayed in Macedonia when the Balkan route was closed.

Kurz: Final decisions must be made by the parties, and we will not interfere