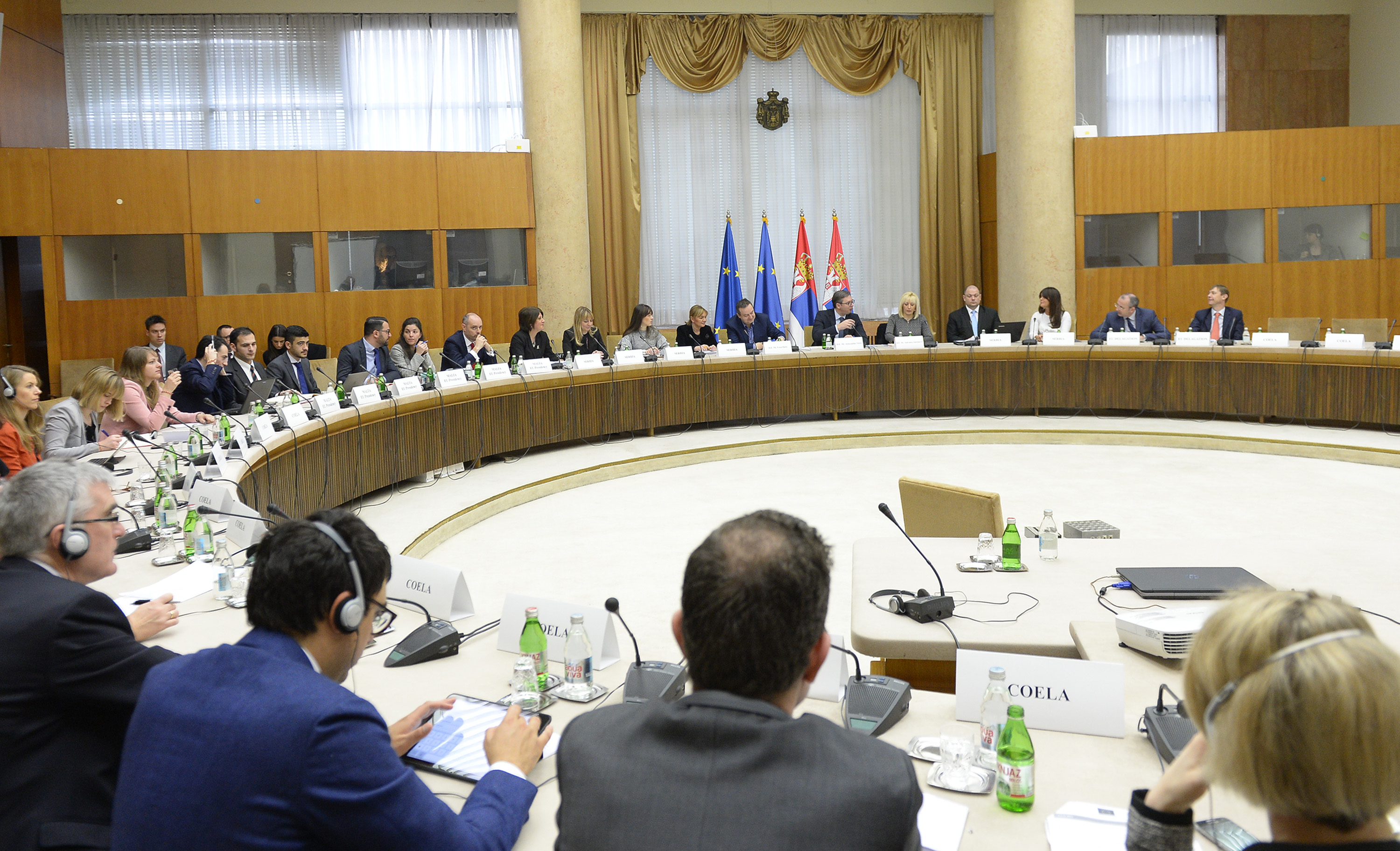 Meeting of COELA and Serbian representatives; Photo: Tanjug/Tanja Valic
BELGRADE – Prime Minister Aleksandar Vucic stated today during a meeting with members of the Working Party on Enlargement of the Council of the EU (COELA) and representatives of the Council of the EU and the European Commission that Serbia will remain firmly on the European path and that its strategic goal is membership in the EU, with preservation of the traditional good relations with friends from the East, stated Serbian Government’s website.

Speaking at the meeting that was held at the Palace of Serbia, Vucic said that the presence of ambassadors of the member states of COELA is a proof of commitment of the EU to the enlargement process and expressed the desire that participants in the meeting leave Belgrade with clear answers to all their questions.

Serbia is on the European path because we believe we belong to that type of society and we would like to join the countries that believe in democracy, private entrepreneurship and human rights, although I know there will always be many objections to our behaviour and many requests, Vucic said.

The Prime Minister voiced hope that regional stability will be preserved in the Western Balkans, which he sees as the major obstacle for economic development and growth.

We have invested a lot of effort to preserve pace and stability and we will continue with that policy, although very often not everything depends on us.

I hope that others too will be careful about their political moves, that we will have greater certainty in the region, the Prime Minister said and added that he sees the region as a new source of Europe’s growth.

Noting that we face obstacles from the unsolved political questions from the past, he underlined that the region can go forward only if we turn to the future.

Vucic said that he is worried the most about the situation in Bosnia-Herzegovina and expressed conviction that Serbia has had a very constructive role. He voiced hope that judicial wrangling between the two countries will come to an end and that they will turn to joint projects as soon as possible.

According to him, there are many great ideas about new railways and motorways that will connect countries and citizens and boost their economies.

Speaking about the economy in the previous years, the Prime Minister said that Serbia has done many good things, it carried out reforms that led to stabilisation of the budget and public finances and downsized the public sector.

Last year we had economic growth of 2.8%, the inflation was 1.1%, and the deficit was 1.35%, and for the first time since World War Two we achieved surplus in the state budget without major privatisations, he explained.

Vucic said that at the beginning of this year the deficit was €235 million and the surplus in the state budget was €80 million, which shows that the Serbian economy is growing and that revenues cover expenditures.

The Prime Minister noted that Serbia has smaller problems than many EU countries regarding deficit and economic growth rate.

He said that international financial institutions project a 3% growth for Serbia this year and that the Serbian government expects that the growth will reach 3.5%.

Vucic said that there are also things he is not satisfied with, and this is first and foremost inefficiency of the legal system.

I hope that we will manage to overcome many problems in that field with great help from the EU. We need to increase legal safety of investments in order to attract as many investors as possible, the Prime Minister explained.

Vucic said that the major investors in Serbia come from countries of the EU, such as Germany, Austria and Italy, but there are more and more investors from Scandinavian countries.

Also, he noted that Serbia achieves surplus in the trade with the countries of the region, which is a proof of importance of that cooperation.

The Prime Minister recalled that two new chapters in accession negotiations of Serbia with the EU were opened on 27 February, of which one was closed temporarily.

There is a lot of work ahead of Serbia, but we crossed the most difficult part, Vucic concluded.

The Migrant Crisis: A Catalyst for EU Enlargement?