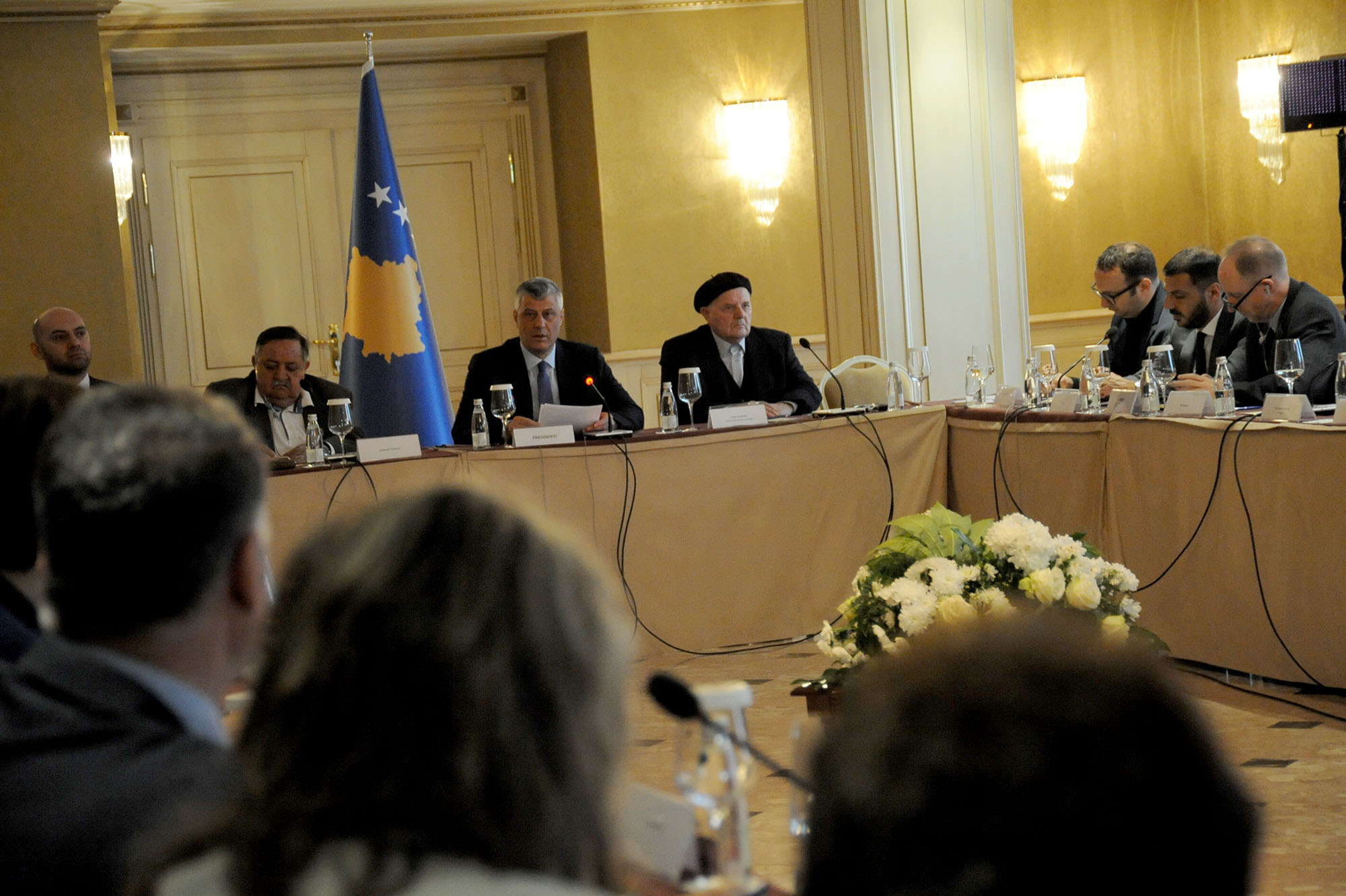 Hashim Thaçi at the meeting; Photo: President of the Republic of Kosovo

PRISTINA – The President of the Republic of Kosovo, Hashim Thaçi, has held the second consultative meeting with representatives of the civil society and the media for the Commission for Truth and Reconciliation.

Thaçi stressed that the readiness of everyone to work together on this very important initiative for Kosovo is necessary, for the society of Kosovo and their future.

“The civil society and the media will have a crucial role in this commission, therefore it is important for you to be part of the project from the beginning, first by contributing with your ideas and then also with your direct commitment”, said Thaçi.

Thaçi said that they have set up good institutions and infrastructure and they have almost eradicated the physical traces of the war, but their pain for the losses caused, for the loved ones who have been killed or are missing, have not disappeared.

“The Kosovar society can not build a better future if it remains a hostage of the past, which is why I have taken this initiative”, stated President of Kosovo.

He elaborated his idea, saying that the first goal of this commission will be the truth.

“The work of the commission can only help justice. The acceptance of the truth is essential for justice as well. Therefore, it is not about repayment of the crime. Nor will it be allowed for somebody to hide behind ignorance, falsehood, silence or concealment of crime”, said Thaçi.

“That is a different process, separated from this one that we are starting here. But, this process here, the truth and reconciliation in Kosovo, will be helpful for reaching new agreements and for interstate reconciliation between Kosovo and Serbia”, stressed Thaçi.

He also spoke about the general recommendations of the first consultative meeting for the Commission for Truth and Reconciliation.

The features of the Commission for Truth and Reconciliation will be:

1) Independent – to be free from politics and not to be influenced by political interests;
2) To be impartial – to tell the truth of all the victims from all parties;
3) To be transparent – the commission is of the citizens of Kosovoand will report to the citizens of Kosovo;
4) To be inclusive – to include in its work all communities and all regions of Kosovo, but the reports and recommendations to be also for all those who have or may have a role in this process;
5) To be committed to protect the victims and witnesses and to include all the evidence of all victims;
6) To be complementary and draw lessons from previous experiences and initiatives, to foresee and to recommend;
7) The civil society to have a crucial role in the work of the commission.

Thaçi stressed that this commission will gather evidence from all victims through interviews, surveys and these interviews will be adjusted to the requirements of the victims, while respecting their privacy.

“The Commission will also organize public meetings, media programs and informational sessions to promote the work, findings and recommendations of the commission. It will also establish “grassroot” commissions which will help reconciliation at municipal level, and will sponsor the drafting of policies that will support the implementation of the recommendations of the commission”, he stated.

Kosovo President stressed that it is natural that this commission will have to face with challenges as well, like the breaking of the conspiracy of silence of the communities, gaining the trust of victims and the trust of all communities, insistence on the implementation of the findings and recommendations of the Commission and others.

“A challenge will also be the regional component as there are victims living abroad”, he said.

Thaçi stressed that the state institutions have the institutional and human will to illuminate the past and heal the wounds of the past and the commission has the support of the international protagonists, especially of the EU, the OSCE and the UNDP.