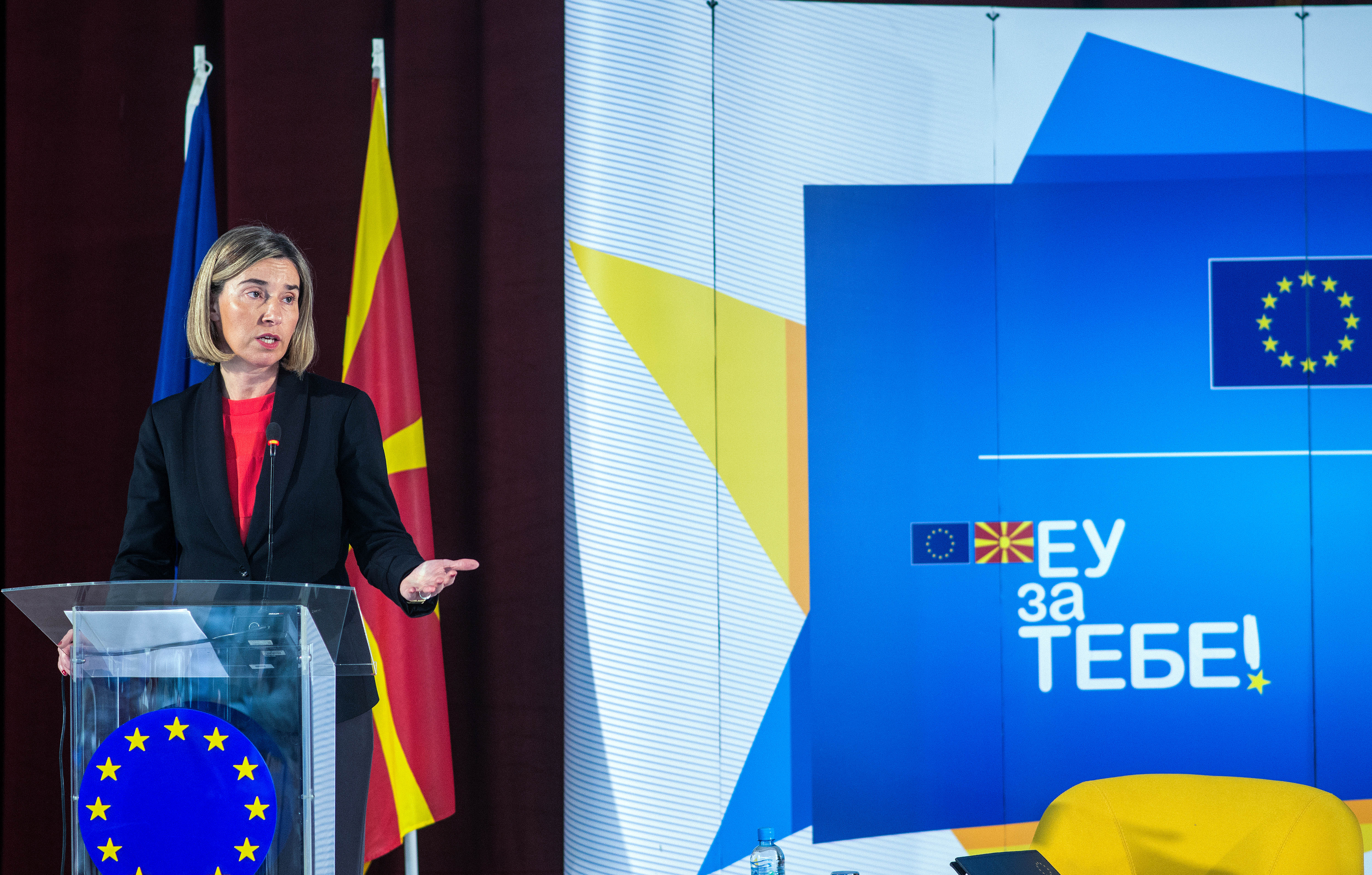 I had then meetings with all the political leaders in the Parliament and a very long meeting with the President [Gjorge Ivanov] so that is why I am very late, for which I apologise. All my meetings were very long as I said, very substantial, and I would say, hopefully, constructive; you will see how constructive the result of these meetings will be in the coming days and hours.

Obviously my visit comes in a moment that it is particularly complicated for the political and institutional crisis of this country and so major issues we discussed today is how to get out of this political and institutional crisis. It is not for the European Union to indicate the way, but it is for sure, for the European Union, as a friend who cares about this country and its citizens to indicate what worries us in this moment and what we believe will be a serious break of the democratic principles, of the democratic experience, of the Constitution of this country.

I believe after having exchanged with many colleagues and friends in the European Union, but also in NATO, because this morning I discussed about the content of my visit also with the NATO Secretary General Jens Stoltenberg. He asked me to convey my messages also on his behalf: I believe that it would be impossible for anyone, to convince anyone in the democratic world that the majority of members of Parliament, who represent the majority of citizens in a unitary state, cannot be allowed to form a government – and that instead of democratic rules, chaos prevails today.

This breaks the spirit of democracy, this is inconsistent with basic democratic principles, this is inconsistent also with the Euro-Atlantic integration process that is proclaimed as a priority by all party leaders as well as by the President himself and, I know, it’s a real priority for all the citizens of this country.

Last but not least, I would like to spend a word to say that all political leaders and all those who have institutional responsibilities have the duty to contain and scale down the rhetoric, avoid that this political and institutional crisis becomes an inter-ethnic conflict, or even worse a geopolitical conflict. This is a complex country in a complex region and in really complex times. We do not need fuel, because we have quite some fire already. So I really hope that everybody will exercise the maximum of responsibility and avoid any rhetoric that can fuel clashes or confrontation in the society.

The country is not exposed to external threats but to some serious internal problems and it is up to the leaders of this country to take responsibility and to bring the country out of this. I believe that it is going to be important to avoid any irresponsible behaviour, any incitement intentions between communities. I also believe that a question that needs an answer is why one of the other community feels strengthened and how to tackle the absence of trust. You are one country with many citizens and it is up to the leaders to find a way of making these citizens live together in one country, together, in respect and in trust.

I will be leaving Skopje tonight but I will be reporting to the Foreign Ministers of all the 28 member states of the European Union on Monday, in Brussels. We will discuss the situation here; we will also do that with all the heads of states and governments of the 28 Member States of the European Union, by Ministers, Presidents, Chancellors on Thursday in Brussels when we’ll have the European Council. So, we will come back to the situation in the country in the coming days and weeks, and you will continue hearing messages from us in this respect.

I hope that the good exchanges we had today, both with the leaders – all of them -and with the President will allow the country and its institutions to find a reasonable way forward in full respect of the Constitution and to bring to the country out of this institutional and political crisis in a very responsible manner. And in that case, the European Union – and I would say also the entire international community – will be on the side of this country and all its citizens to do the right steps to advance on European Union integration path.

Finally, let me say. Those of you who know me, know that I may be the best friend and the best sponsor of bringing the entire region inside the European Union. Do not lose this opportunity, we can work on that, but we need the country to have strong, solid institutions and to be united.

Mogherini in Western Balkans for next four days