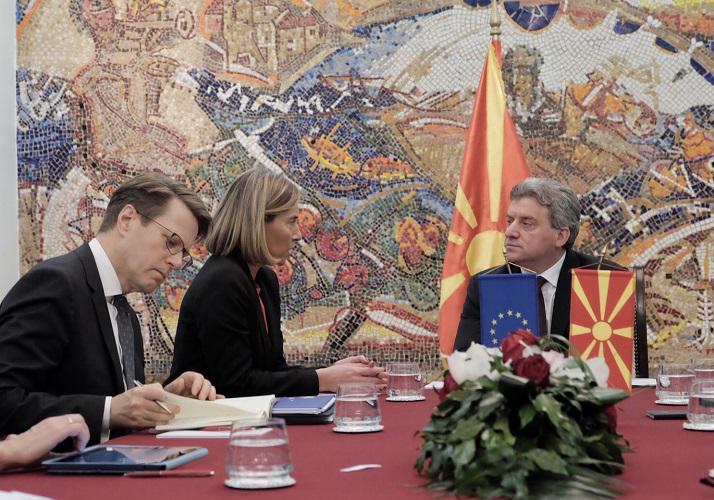 BRUSSELS – High Representative Federica Mogherini continued her visit to the countries of the Western Balkans on Thursday in Skopje, capital of the former Yugoslav Republic of Macedonia, meeting President Ivanov and Foreign Minister Poposki and meeting with political leaders and civil society organisations, EEAS reports.

“The reason of my visit here today is to send a clear a message that the European Union is committed to the EU integration of this country and of the entire region,” Mogherini told a press conference. “We are serious about that, our door is always open and we want this country to come in and to become a member of the European Union. This is the sense of my visit here today and the message I am bringing, not only in this country, but to the entire region.”

Mogherini nonetheless had a warning for the political leadership in Skopje: “Let me say: we have lost too much time so far. The question is: is the political leadership of this country willing to continue to lose time, or do we want to move forward? On our side we are ready to move forward, on the integration path of this country to the European Union.”

Referring to the current Constitutional crisis in the country, Mogherini said: “Obviously my visit comes in a moment that it is particularly complicated for the political and institutional crisis of this country and so major issues we discussed today is how to get out of this political and institutional crisis. It is not for the European Union to indicate the way, but it is for sure, for the European Union, as a friend who cares about this country and its citizens to indicate what worries us in this moment and what we believe will be a serious break of the democratic principles, of the democratic experience, of the Constitution of this country.”

She called on all parties to tone down inflammatory rhetoric, and called directly on President Ivanov: “So I asked the President to reflect on the way forward, to reverse his decision in the interest of all citizens of this country; and as the Constitution says, I quote: “entrust the mandate to a candidate belonging to the party which has the majority in the Assembly.” This is the Constitution of this country and we expect this Constitution to be respected.

On Wednesday, the High Representative was in Podgorica, Montenegro, where she delivered the clear message that the EU will continue to strongly support all six countries – Montenegro, Bosnia and Herzegovina, former Yugoslav Republic of Macedonia, Serbia, Albania and Kosovo – in their European perspective and in building closer regional ties.

“The message I am bringing here, starting my visit here is this: that the European Union door is open, not only that, but that we want you to cross that door and enter,” Mogherini said after her meeting with Montenegrin Prime Minister Duško Marković.

“So this is for sure a message of encouragement, of hope, but also a message of commitment because we know very well that this needs – membership to the European Union – needs hard work from your side, not to meet our conditions but to meet the expectations of your people, because every step is a step that improves the lives of the people and the society and infrastructure of the country.

“But this also requires credibility from our side and I am here also to tell you … that the European Union is committed to have new Member States, to have the European Union integration process for Montenegro and for all the region as a credible and real perspective. So it is not a dream, it is not a vision. It is something that is happening and it will happen and it will happen in the coming years if we manage to continue working well together,” the High Representative said.

“This is not out of charity; it is because we share a common European interest in cooperation, economic growth, peace and stability.”
On Friday, the High Representative will travel to Belgrade and Tirana, and on Saturday to Pristina and Sarajevo.