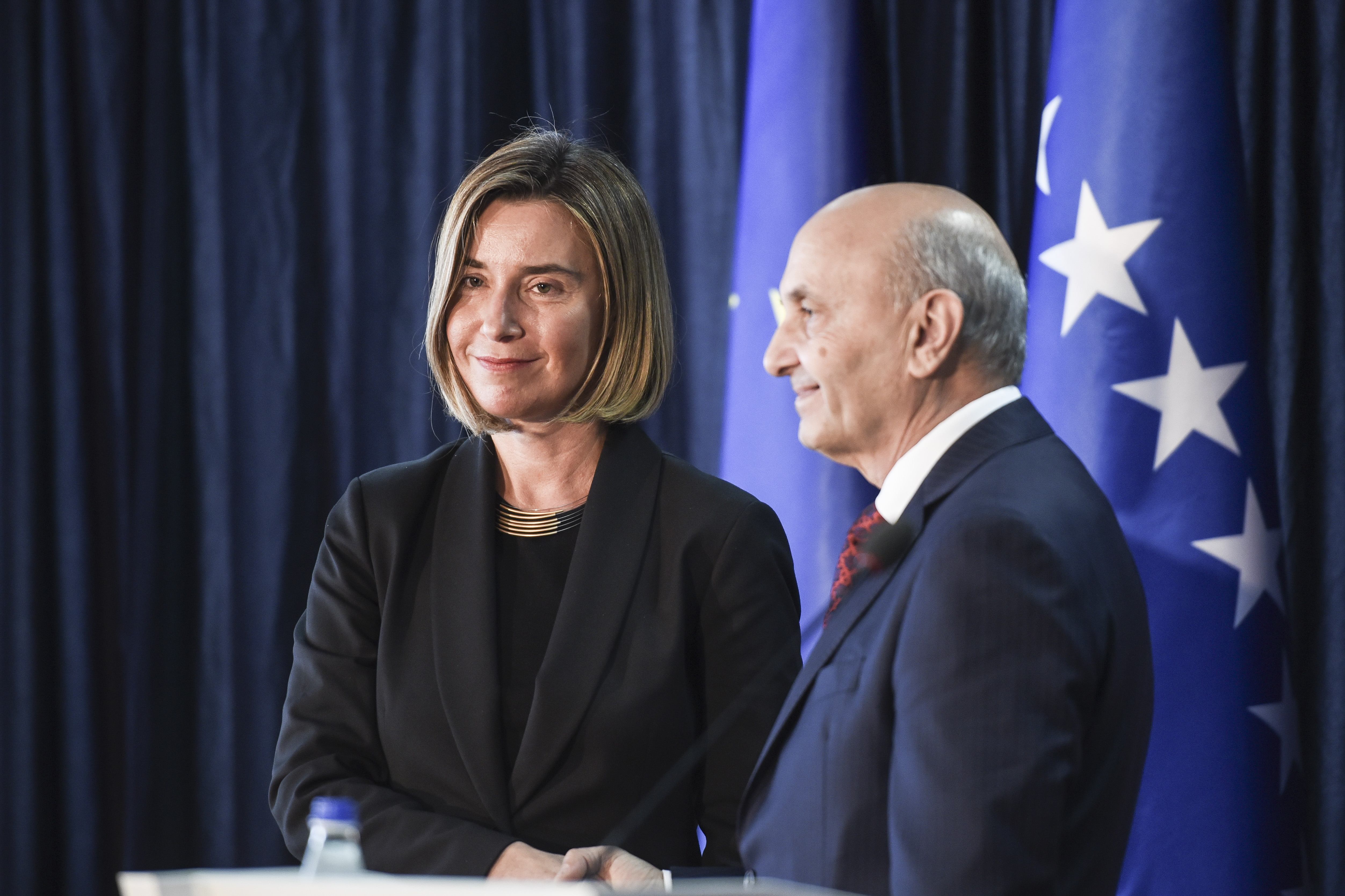 It is for me always a pleasure to be back to Kosovo. This morning, I had very good meetings with the Prime Minister, with the President, with the Speaker of the Parliament and I will continue with a meeting with the political leaders.

For the European Union this is a priority, we see this as an investment in our own stability, security, growth and the major steps that were done last year in the entire region and here, prove us that change is possible in this direction, that achievements have been reached and can continue to be reached if we work together in a good sense, in a good cooperation.

We discussed the importance that not only Kosovo attaches to the European path, but also that the European Union attaches to the European path of Kosovo. In particular we discussed the perspectives of the EU-Kosovo relations following the entering into force of the Stabilisation and Association Agreement, a major, major achievement. And I could not start my remarks here if not by remembering that last time the Prime Minister and I were on this stage, it was less than one year ago, in May last year. It was exactly the same day, or the day after the European Commission proposed to the Council and to the European Parliament to lift visa requirements for the people of Kosovo and the visa liberalisation process was announced here on this stage.

So if you allow me, Prime Minister, I would start from this point that I know is very close to the people’s hearts and rightly so, especially to the young generation. In the proposal of the European Commission we presented here in May last year it was very clear already then that there were two conditions that had to be fulfilled before granting the visa liberalisation, before this goes to the approval of the European Parliament and Council. The two conditions were and are – first, Kosovo needs to improve its track record in fighting organised crime and corruption – and on this progress has been made, as the Prime Minister mentioned, this is also our assessment. And second, to ratify the border demarcation agreement with Montenegro and here, unfortunately, no progress has been made since I visited Kosovo last year.

And I would like to say very clearly and, I don’t think I need to say it loud, because of the number of the media present will guarantee that this is heard well, now is the time to move forward on this, which means time to vote for the ratification of the border demarcation agreement with Montenegro. This will unblock the visa liberalisation for the people of Kosovo, we are ready for that and this is now up to the Parliament to take its steps.

I am convinced that political parties, political leaders, political forces, parliamentary groups, will keep their differences, differences in politics are not only natural, but vital and for sure in this region, which I also consider a bit my region, you can always count for political division to be very clear and also self evident. But I believe also that political parties have clear in mind that when it comes to the interests of the people, on something very concrete such as visa liberalisation, they have the responsibility to overcome the politics of the political debate and jointly and constructively look for ways to agree on what can make Kosovo advance.

So I am confident that political parties can find a way to agree on having this agreement ratified in the Assembly. The people of Kosovo, I know that well, want and deserve visa liberalisation. I believe that what they do not deserve is a lack of national political consensus to move forward, on this very concrete step and also on the European Union path and EU-related reforms that are the very powerful game-changer for the economy and the society.

We also discussed another very important issue on which we work together: the dialogue. I thank the Prime Minister but also the President for the very constructive and positive attitude. We faced in recent months some moments of tension, difficult moments that we managed in the dialogue and through the dialogue to overcome. I welcomed this intention to leave these difficulties and tensions behind. I believe it is going to be very important to keep this intention also in the coming months and to focus on the way ahead. Also because as the Prime Minister mentioned very rightly, there is no alternative to the dialogue and the dialogue is not something that is done for the sake of Brussels; we have quite a full agenda of many different internal, external, regional issues to deal with.

This is at the service of the people of Kosovo. This is a facilitation we offer, a support we guarantee, in order to find sustainable solutions to issues that are on the table; and that through dialogue, through mediation, and at the crossroad of Brussels we can find a solution that needs full ownership and full implementation. This is why we discussed the need to implement agreements; we will be continuing to support the efforts to implement agreements. I agree on the need to move faster on this and the European Union – and me personally, will continue to guarantee all our support to implement fully the agreements we signed.

I would like to finish by saying one other thing that is somehow also related to the dialogue. Before leaving Kosovo today, I will have an opportunity to visit the Mitrovica Bridge that will no longer mark division or confrontation, but will become the symbol – I hope, I believe, of a new relationship between the Kosovo Serb and the Kosovo Albanian community.

An urban space will be made available again to the people of Mitrovica North and South. The revitalisation of the bridge, as well as King Petar Street will contribute to facilitating contacts between citizens, all citizens of Mitrovica and will thus contribute to exchanges, understanding and this is also what the dialogue is about.

But I would like to say that this is also the result of the dialogue at the political level. Sometimes it is difficult for public opinion to link what happens at highest political level and what happens on the ground, I think it is our common responsibility to highlight and show that progress is made on this, or on the dialing code, or other issues –  this is the result of hard work, strong commitment, taking responsibility, sometimes taking long hours at night of difficult negotiations, but at the end of the day this brings results for the everyday life of people of Kosovo and we, in the European Union – me personally – are committed to continue in this direction.

I thank you very much and I hope that we will have good news soon in terms of proceeding on visa liberalisation because again, I would like to stress it once more, this is now in the hands of the Assembly of the country. We are ready on our side, and if the Assembly will proceed to vote with the ratification of the demarcation agreement, we will be able to move forward very fast and with that very concrete results for all the citizens will come.

I thank you very much Mr Prime Minister, it is always a pleasure to be back.

Link to the video: http://ec.europa.eu/avservices/video/player.cfm?ref=I134284

Mass inflow of migrants not expected, asylum requests on rise in Serbia

Miščević: No indication of objections over lack of dialogue