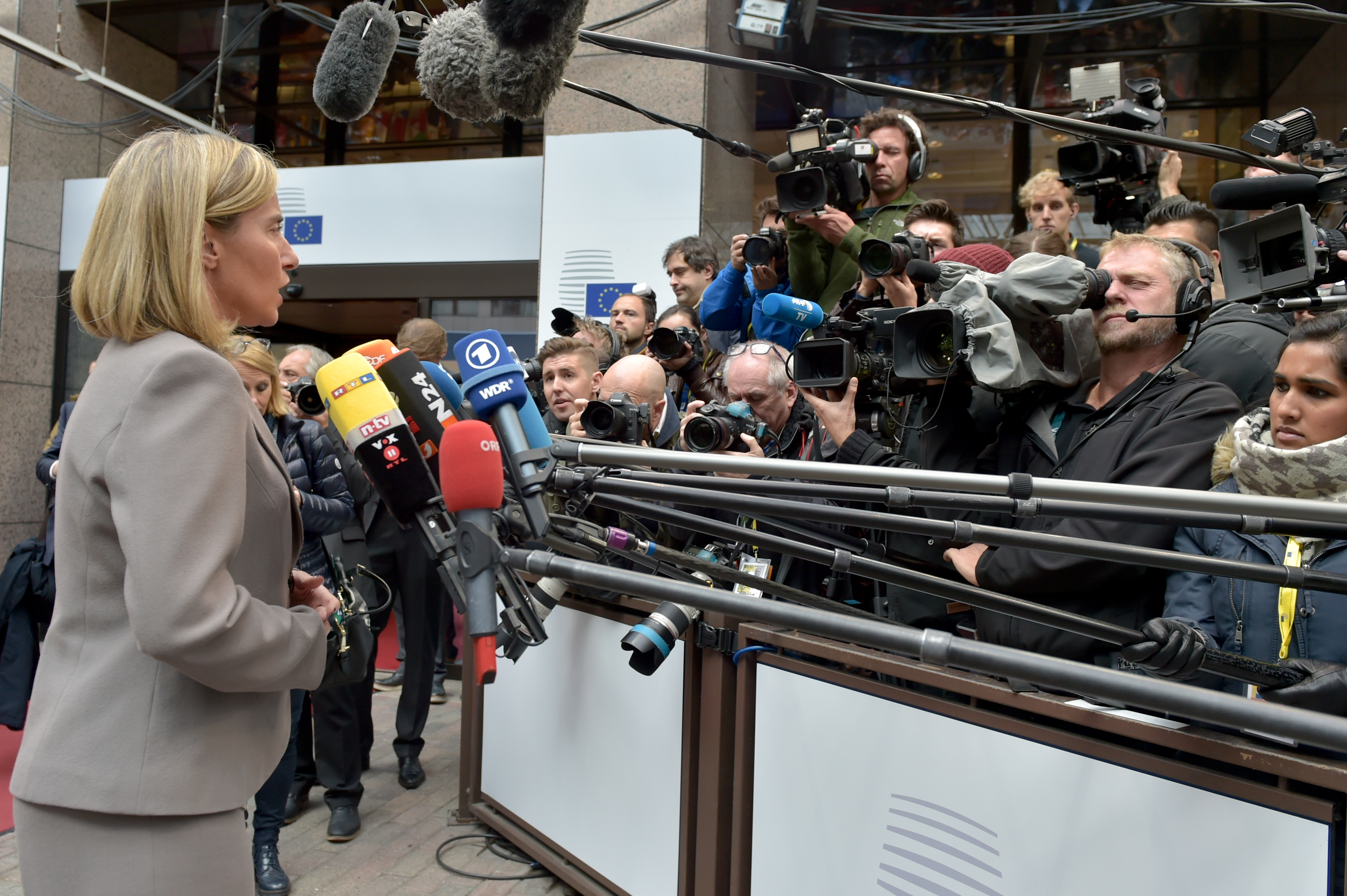 BRUSSELS – After her visit to the Western Balkans, HRVP Federica Mogherini discussed situation in the region with the Foreign Affairs Council. After the meeting, she replied to the journalists’ questions.

Concerning the topics of the Western Balkan countries, specifically on Albania, what were the concerns of the Members States? I know that during your visit in Tirana you made it clear to all the parties on what was expected by them, but, on the other side, I would like to know if all the Member States agreed on to set up a date for the negotiations with the country at least by the end of this year, hopefully hoping there will not be big surprises by general elections and there will be a smooth implementation of the first stage of the justice reform.

FM: We did not discuss dates. We discussed and confirmed what I brought as a message in Tirana  – that the European Union is ready to open negotiations in a moment when the justice reform is started to be implemented and, in particular, the vetting procedure. So all Member States were fully backing the message I was bringing in Tirana just a few days ago.

You are just back from a mission to the Western Balkan countries. How deep are the concerns right now about Russian interference in a sort of countries here? And to what extend are Member States seeking action in that regard?

FM: I have seen in the Western Balkans in these days much more than ever before: a region exposed to different layers of challenges and tensions. Some internal, domestic politics dynamics that create tensions in some countries; some regional inter-ethnic tensions or between or among countries that are extremely dangerous because they could bring the region back a few years. Peace is never to be given for granted. And also I have seen a region exposed to some global tensions. The Balkans can easily become one of the chessboards where the big power game can be played. So the concern is there, also because this is happening just after a very good year for the Balkans. There is not one single of the six of the Western Balkans that has not done enormous progress last year on its European integration path – well, maybe one or two – but the general sense of direction last year was excellent, evident, uncontroversial and the result of a common determination both here, in Brussels, by the EU institutions, by the Member States and from the countries in the region.

So, the concern is there and is profound, but there is also the confidence that derives from the fact that there is no other power in the world that has so much impact for good on the Western Balkans, and that is the European Union. I shared with the ministers and they agreed with me on the assessment that the power of the European Union in the region is linked to the credibility of the EU integration process; and this is why I believe you will see also in the coming days in the European Council strong determination from Member States to give a stronger credibility to this path.

Also, because, let me tell you, yes, I came back from the Balkans worried in some cases, but also full of optimism and hope, because whenever you meet the students, the citizens, civil society, but also so many political and social forces in all the region, you see the enormous support and trust in the European Union. You see the desire to enter the Union and I have repeatedly said in the region – and I repeated to the ministers today -, while we reflect on the future of the European Union, we can be sure that it will not be at 27; because there is an energy, a pro-European energy, in the Western Balkans that just waits to be let in. And I think we have, and the Ministers confirmed that today, full interest in making this process credible, fast, consistent. This requires also a lot of work in the Western Balkans, but also on our side. So I am worried, but also we have all the tools to overcome difficulties and to offer to the people of the Western Balkans the future and the perspective they want: just peace, economic development, regional cooperation and I could continue.

When you are talking about concrete results, what we will be to see or what will  the citizens of the region be able to feel and to see regarding the concrete European Union engagement in the region in the next few days, months? And, maybe, is there something that we can expect from Serbia concretely to do in this way for all the region to go forward?

FM: The concrete results depend equally from the European Union and from the governments, the parliaments, the institutions of the countries in the region. Actually, they depend more on the institutions and countries of the region than from us. From us, what they can expect is a renewed engagement, a unitary commitment meaning all the 28 Member States strongly behind the messages I brought to the region. And this key message: the door is open, we want you to enter, you know what is the way to enter and this will transform societies and economic and social perspective of the countries. This means good regional cooperation, this means containing and avoiding rhetorics that can be dangerous, this means economic opportunities, trade opportunities, this means peace – again, it is not an irrelevant word in the region – and this is what the people of the Balkans can expect from us.

A serious, consistent, committed approach that recognises and acknowledges the steps done on the way to the European Union integration path and also supporting the countries and the people, especially the people in the countries. One of the things that were really positively striking to me during my visit was the enthusiasm of the young people, everywhere in the region, be it Erasmus students, be it those that are angry and frustrated because they do not get a job. All of them see the European Union as the key to solve the problems or the key to improve the situation. I think this is not only something we own to these generations in the Balkans, I think this is also something healthy for the European Union to bring this energy in. So this is what they can expect: commitment, unity, determination, even perseverance on our side and the rest will come. But, again, the institutions will have to do their part.

FM: I will not obviously give details of what one minister or the other has said, but I can tell you that in general terms all the ministers were backing strongly the messages I have expressed in Skopje – by the way, that I expressed in my meetings, with the President, with all the political leaders but also publicly, not only on behalf of the European Union, but also on behalf of NATO Secretary General [Jens Stoltenberg]. How worried I am? I am, but I am trying to learn to move beyond the worries and see the potential for solving institutional crisis, political crisis. I believe that what Skopje is facing today is still a political and an institutional crisis. My main worry is that this turns into an inter-ethnic crisis and this has been the main message I have passed to those who have political responsibility in the country: Do not play with fire, do not turn this into an inter-ethnic confrontation that would ruin the country and probably spread further beyond

I believe there are instruments: first of all, the wisdom of the President [Gjorge Ivanov] and second, the capacity of the Parliament to proceed for instance by electing a speaker I imagine, or de-blocking the situation, so that this institutional and political crisis can be managed with the instruments that Skopje has, without interferences. It is only normal that friends care about the state of play and the future of partners. So, this is where we are; we believe that there are possibilities to come out of the institutional crisis, that resources to do that in Skopje exist and I have had a very frank, but also constructive exchange on this with all political leaders in the Parliament and also with the President. So, I hope the wisdom will manage to prevail. Thank you.

Link to the video: http://ec.europa.eu/avservices/video/player.cfm?ref=I134400