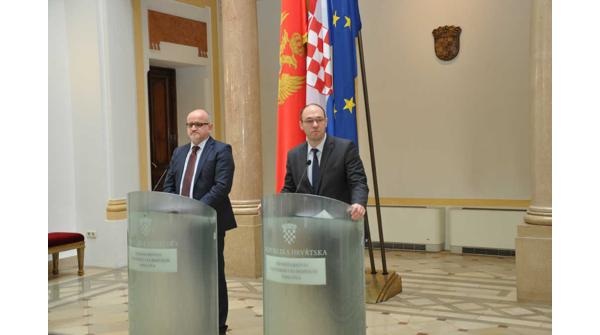 Croatia supports Montenegro on its European and Euro-Atlantic journey and believes this is in Europe’s geo-strategic as well as security interest, Croatian Foreign Minister Davor Ivo Stier said in Zagreb on Wednesday after talks with his Montenegrin counterpart Srđan Darmanović.

“Croatia and Montenegro, through the Adriatic Trilateral as well as bilaterally, maintain intensive relations also in the promotion of and support to Montenegro on the European and Euro-Atlantic journey… Montenegro received a NATO invitation and the ratification process is nearing the end. We underlined that this is both in Europe’s geo-strategic and security interest,” Stier said, adding that he was optimistic that the process would be completed soon.

The Croatian parliament ratified the protocol on Montenegro’s NATO accession on 25 November 2016.

Darmanović thanked Croatia for everything it had done and was doing on “our patient struggle to join both NATO and the European Union because those are the foundation stones of our country’s foreign policy.”

“Croatia ratified the NATO accession protocol and understands very well the needs of the region and that Montenegro’s membership is a missing link in the chain,” he said, voicing confidence that Montenegro would become NATO’s 29th member at a Brussels summit in May.

“We believe that will contribute to the stability of the region and that it will, in a way, benefit other aspirants, our neighbours, in whose progress we are interested,” Darmanović said.

He went on to say that the security situation in the region “must not be ignored.” Montenegro had its own security challenges and successfully resisted them, he said, adding that “our region needs continuous engagement by the EU and NATO.”

Darmanović recalled that Croatian President Kolinda Grabar-Kitarović warned at a Munich security conference that “the meddling of third parties in the Western Balkans represents a threat to Euro-Atlantic integration.”

“That wouldn’t be the most desirable scenario,” he said, adding that “Montenegro knows where it’s going”.

He went on to say that Croatia had been wholeheartedly helping Montenegro on its EU journey “from day one,” recalling that his country had opened 26 and closed two negotiation chapters.

The two ministers said economic cooperation was good, notably in construction, and that there was a wish to intensify it in energy too.

As for outstanding issues, Stier said Croatia and Montenegro had “strong good neighbourly relations and have approached all those issues with the intention to start dealing with them.”

“Things are moving up with regard to outstanding issues too. Willingness has been expressed to deal with outstanding issues together, in agreement and without rash moves,” Darmanović said, adding that Montenegro wanted this trend to continue with a visit by Croatian Prime Minister Andrej Plenković.

US Ambassador to Macedonia: Institutions must be functional

Amnesty International: Freedom of expression and freedom of media key issues in Balkans