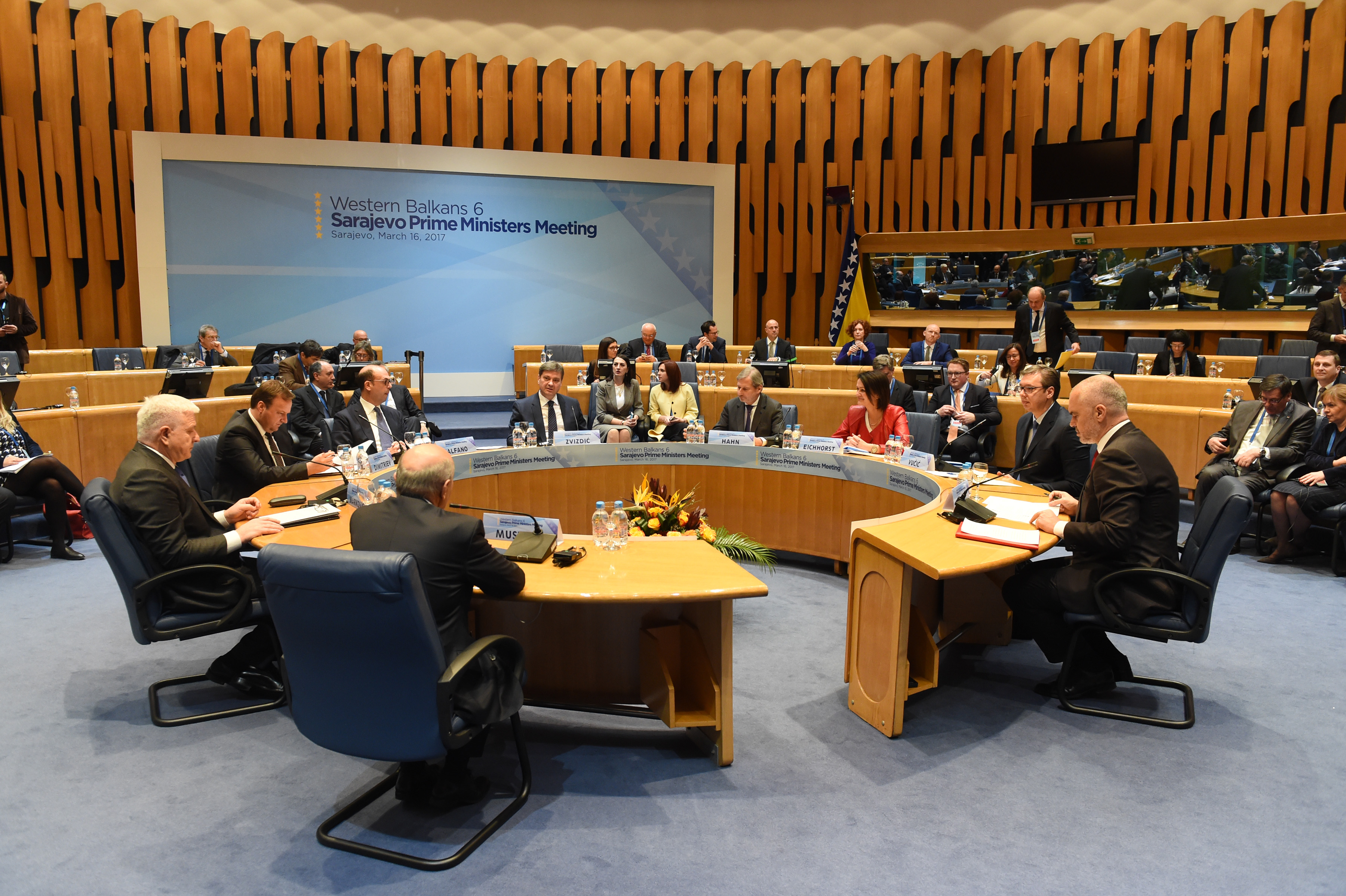 SARAJEVO/NEUM – Surprising as it is, on the same day two different meetings concerning the European integration happened in Bosnia and Herzegovina. One in Sarajevo and the other one in Neum. The former was a Western Balkans Six Leaders summit with the participation of EU representatives, namely Johannes Hahn, Commissioner for European Neighbourhood Policy and Enlargement Negotiations. The latter was an interdisciplinary conference that took place in the south of BiH, at the only town with access to the Adriatic Sea, Neum. Politicians, scholars and academics, mainly representatives of the Croats from BiH, under the sponsorship of Croatian member of the Presidency of BiH Dragan Čović, took part in the conference named: Croats of Bosnia and Herzegovina: Holders of European values? Preeminent figures from the Republic of Croatia were also present, such as the President Kolinda Grabar-Kitarović, and Minister of Foreign and European Affairs, Davor Ivo Stier, as well as the MEP Tonino Picula, from S&D group.

The two conferences were an unexpected chance for the public to witness the contrastive approach to the building of political community in Bosnia and Herzegovina.

The contrast of the meetings

The summit in Sarajevo was that of a regional character, but it emphasized the willingness of BiH to further commit to the integration path. With the message of “bundling strength as a region” a joint statement of the summit expressed concern about the nationalist polarisation and pledged to resolve political differences. One of the main messages of the Sarajevo summit was that of continual commitment to the “fundamentals first” principle, meaning the rule of law, fundamental rights, democratic institutions and public administration, continue to be at the core of the reform process for all the Western Balkans countries.

Neum conference yielded a peculiar understanding of that principle when it comes to BiH, with the focus of internal reform that takes into account the multinational character of the country. The hovering proposition of the Neum conference was that the question mark in the title of the conference was redundant, and that the Croats from BiH are the “forerunners of the European path of Bosnia and Herzegovina,” as stated by Čović. Both the summit and the conference had a feature of international participation, that of the factors involved in the eventual further enlargement of the EU.

It is not the first time, of course, that the EU officials, MEPs, and individual representatives of an EU country, function differently. But it could be argued that there is a differentiated approach in the creation of discourses of the European path of BiH, and that such perception is vibrantly expanding. The practical need for democratisation of BH institutions and pragmatic messages of the need for a better economic functionality are often confronted with the vagueness of theoretical approach to those improvements. That is to say, how can a country with unresolved internal issues deliver promising results? To phrase it differently, are European values conceivable in a country characterised by deep internal misunderstandings and conflicts? The EU’s internal diversification when it comes to the issue of political values in BiH only adds to the confusion about the path of the democratic reforms needed for a functional society.

It is not the first, nor will it be the last time that the representatives of the Croats from BiH will stress the issue of their inequality, or that the Bosniak elite will negate such perceived inequality and emphasize different problems in the country. Citizenry and peoples of BiH are more or less accustomed to such strivings. But, with Hahn in Sarajevo and Croatian politicians and MEPs in Neum, the possibility of misunderstanding the role of the EU in the process of integration of BiH to the EU, increases severely. To the public eye, this might seem to be a diversified process of Europeanisation of BiH.

Now if we put aside the passive-aggressiveness of the title of the Neum conference, one important often neglected message has repeatedly occurred on the lips of the speakers, the fact that Croatia can veto BiHs entrance to the EU. The trouble is that in the minds of the Bosniak elites, and with the likes of such meetings as in Neum, politicians from Croatia appear to be doing so already. Such dismissive attitudes are specifically the reason for the Neum conference, the speakers stated.

It is a differing approach to that advocated by Hahn in Sarajevo, with none of them being holistic enough. The focus on the economy and public administration presented in Sarajevo, although in principle effective, can be understood as a camouflage to the problems that are hurting that economy and society in general – the issue of the character of the political community of BiH. Such approach can give a second-hand legitimacy to the political elites that the road to the EU is paved with their intentions, not with the growing need to resolve country’s political misunderstandings. To put it more bluntly, the EU risks presenting itself as highly desensitized to the BiHs diversity. More importantly, it could perplex even those convinced that the future of BiH lies in the step-by-step democratic consolidation of public institutions, based on a gradual liberal political socialisation.

Sprawling of a straggling country

To the officials from Croatia, backed up with the voices of several Croatian academics, the care for Croatian people in BiH is a constitutional commitment of Croatia, and they are keen to deliver that message in the EU bodies. Therefore, it would be entirely unpractical for the messages of EU officials to side-track from that proposition. On the other hand, increased intellectual contribution to the theory of internal organisation of BiH shouldn’t appear at the back-door of the European process in a highly one-dimensional manner, portraying the troubles of just one people in the country where the difficulties affect all. It is a multi-layered issue and having just one approach to it means blocking the views, and possible solutions, of many other.

For the participants in Sarajevo, BiH should follow the path previously cut by different nations, at the risk of BiH being only EU-ised not Europeanised, a vital preconception for a functioning society. More importantly, it gives a strenuous laudation to the current integration process, beyond realising its shaky legs without the increasingly important building of a political community.

BiH is a country where theory and practice combine each time the politicians express Maninchean worldviews, adding to the general perception of a failure to communicate between the citizenry of BiH, radicalizing the public discourses. The risk of further sprawling an already straying and straggling country, will not be aided by differing approaches of factors vital to the enlargement policy of the EU. A comprehensive approach to BiH would simultaneously implement both the building of political community and the reforms needed for the democratisation process and economic progress. Although this fact seems understood by the EU officials and national representatives in the EU, their approach visibly differs. They follow the same objective but with a seemingly different path, often appearing as bumping into one another. The all-inclusive approach is possible, but it needs to be just that – inclusive. These conferences made the public even more anxious and more sceptical about the possibility of any agreement on the much-needed reforms. To retroactively and rhetorically contribute to the issue, the holders of the European values are all those people that represent those values in a practical manner; it is not an exclusive right guaranteed by individual status.

Marko Šilić, Ph.D. candidate at the University of Sarajevo, Faculty of Political Sciences