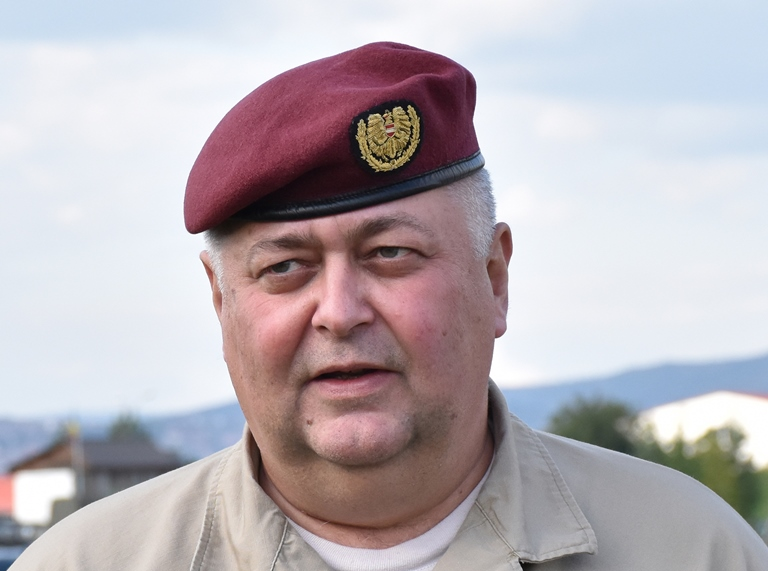 SARAJEVO – Commander EUFOR, Major General Friedrich Schrötter, hosted a press conference Friday in Hotel Europe focussing on the achievements and challenges of EUFOR in BiH.  He hands over Command of EUFOR Operation Althea in a ceremony on Tuesday 28th March and in his statement he highlighted his main successes and difficulties over the last 12 months, it is stated in a EUFOR’s press release.

“Under the direction of the Strategic Board for Ammunition, Weapons and Explosives, AFBiH is now making very positive progress to reduce its surplus ammunition stockpile. In the last 12 months, 2,626 tons of ammunition has been disposed of. Of special note was the fast and efficient disposal of 5,388 pieces of white phosphorus within a very short time frame,” Schrötter said.

He added that with approximately 18,000 tons still in storage, there remains a significant challenge to reduce the stockpile to the end-state target of approximately 5,000 tons by the end of 2018.

“Significant progress has been achieved by Minster of Defence Pendeš and her Ministry through the inclusion of the AFBiH weapons inventory into the Ammunition, Weapons and Explosives (AWE) Master Plan,” he added.

Schrötter pointed out that Thursday’s exercise in Kalinovik displayed the capabilities of EUFOR, coordinating Company level tactics with helicopter support.

“In autumn last year EUFOR conducted the large scale exercise Quick Response 16 where we proved the rapid deployment of reserve forces including those from KFOR. The involvement of AFBiH soldiers led to one unit being certified for future participation in UN or EU led operations,” the press release cites EUFOR Commander.

He said that EUFOR continues to develop a Joint Integrated Capacity Building and Training Plan with AFBiH, and added that he is pleased to report that this effort is now largely focused on monitoring, mentoring and empowering, as AFBiH’s ability to define, develop and deliver its own training programmes improves.

“Over 1,900 soldiers from the AFBiH were trained within one year. Eleven units were trained to a level where they reached an internationally recognised military standard. Furthermore, I would like to highlight the professional approach of the their leadership,” he said.

“Mine Risk Education services by EUFOR continue to provide essential support to the people and children of Bosnia and Herzegovina by addressing the education delivery gap that the local authorities are unable to meet on their own,” it was pointed out by Schrötter.

“Over 20,000 people received this training in 2016. This task is achieved by our LOT House personnel, who are not only the eyes and ears of EUFOR, but are also an essential connection to the local communities that they operate within,” ha added.

He sad that he firmly believes that the role performed by EUFOR under the authority of its Executive Mandate remains relevant and important to maintaining a Safe and Secure Environment.

EUFOR Operation Althea is currently made up of soldiers from 14 EU member states and 5 partner nations. EUFOR is based on a mandate issued by the security council of the UN and closely cooperates with NATO based on the ‘Berlin Plus’ agreement. It is the successor of IFOR and SFOR and contributes to the maintenance and stability of a Safe and Secure Environment in BiH, helping to promote a climate in which the peace process can continue, it was stated by EUFOR in the press release.

Serwer: Russia overdid it, Montenegro in NATO as soon as possible