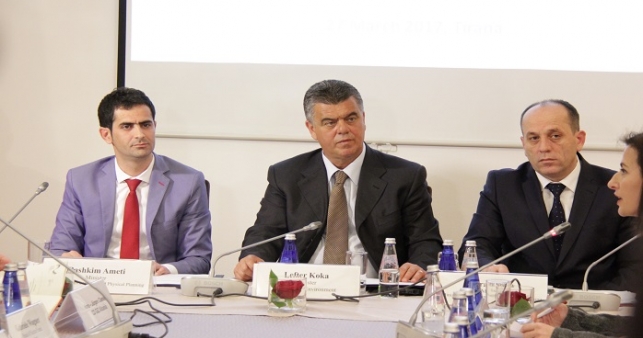 Participants of the meeting; Photo: Albanian Ministry of Environment

TIRANA – The Trans-boundary Management of Ecosystems, a 3-million euro regional project being implemented under the open regional funds for South-East Europe, commissioned by the German Federal Ministry for Economic Cooperation and Development (BMZ), is designed to support Albania, Kosovo and Macedonia to preserve and develop the biodiversity hotspots between the three neighbouring countries, ATA reports.

Minister of Environment Lefter Koka and his Macedonia and Kosovo counterparts, namely Bashkim Ahmeti and Ferat Shala, hosted Monday a high-level meeting to present the Trans-boundary Management of Ecosystems Project in Tirana.

Koka highlighted the importance of regional cooperation for the successful implementation of the project.

“Shared will of all participating parties is vital for the successful implementation of the project between our three countries,” Environment Minister said, confirming readiness of the Albanian government to engage in a close cooperation with other countries in the region.

“Kosovo government has developed the required mechanisms and capacities to implement the project.  Nature, flora and fauna are incomparably more important than any barrier among countries,” Shala said.

German Agency for International Cooperation (GIZ) will provide an amount of 250 000 euros in funding for a human resources training program as part of the Trans-boundary Management of Ecosystems project between Albania, Kosovo and Macedonia.

The objective of the project is to support increased regional cooperation which aim at implementing the EU-Biodiversity Strategy through increased regional cooperation and ensure proper conditions for the management of the biodiversity hotspots and ecosystems in the trans-boundary area of the mountainous region of Sharr / Sar Planina, Korab and Koritnik.