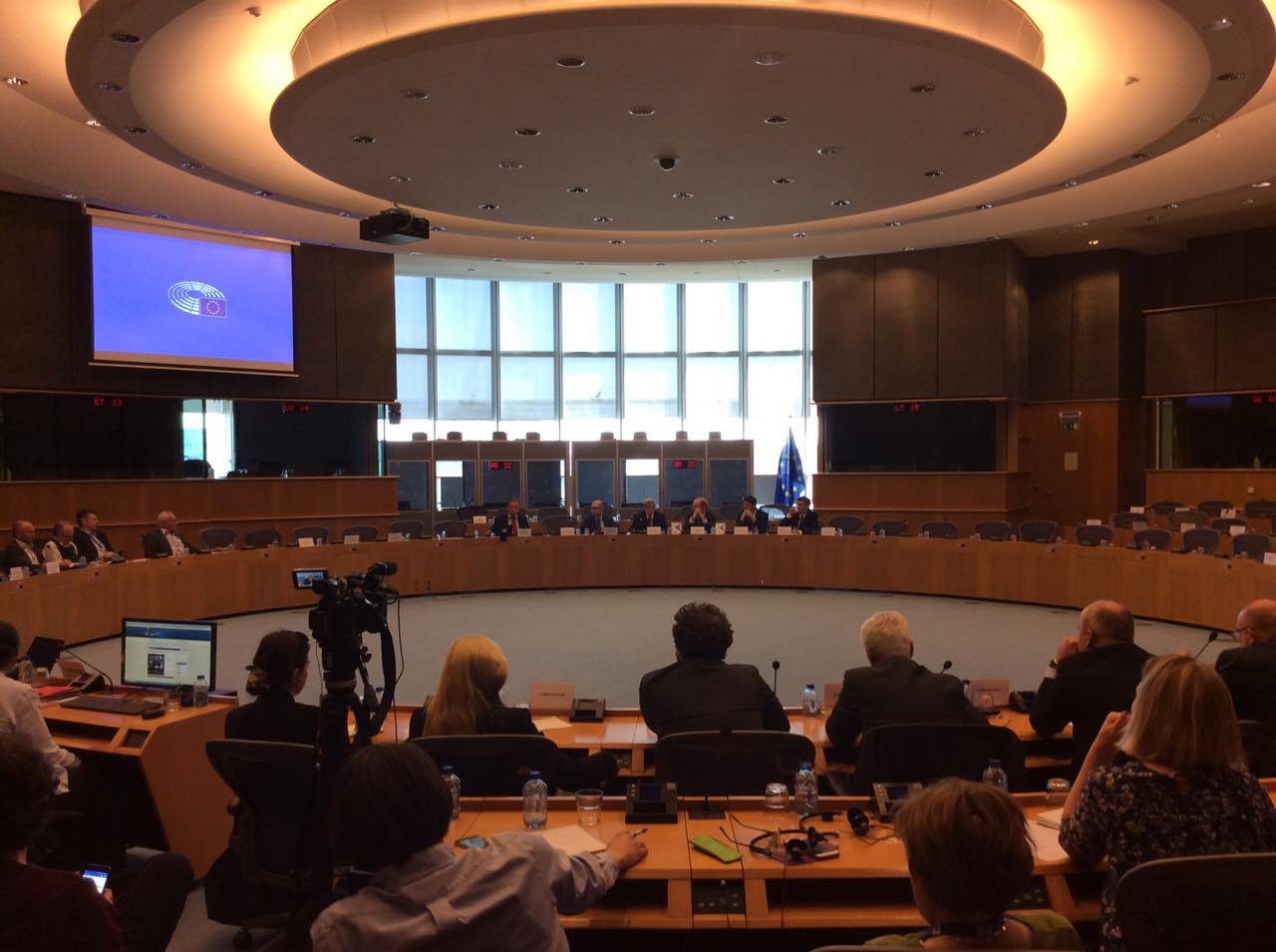 Presentation of the study ‘The Crisis of Democracy in the Western Balkans. Authoritarianism and EU Stabilitocracy’ in the European Parliament

BRUSSELS – A new BiEPAG (Balkans in Europe Policy Advisory Group) study ‘The Crisis of Democracy in the Western Balkans. Authoritarianism and EU Stabilitocracy’ was presented at a round-table in the European Parliament on Tuesady, March 28. The study argues that the state of democracy and freedom in the region has been backsliding or stagnating over the past decade despite the progress in the EU integration process. The event was participated by Igor Bandović, Florian Biber, Marko Kmezić, André de Munter, as well as by the MEPs Eduard Kukan and Knut Fleckenstein.

The new BiEPAG study provides a list of policy recommendations in regard of the European integration of the Western Balkans region, which is closely connected with the current state of the democracy in the separate countries. The study is available here.

Dr Florian Bieber, Professor and Director of the Centre for Southeast European Studies at the University of Graz, Austria and Coordinator of the Balkans in Europe Policy Advisory Group (BiEPAG) presented the basic principles and goals of the study. The policy brief was conducted by the core group and other researchers, which is based on a much larger study.

“State of democracy is rather worrying, but the EU has leverage, has commitment and capacity”, Bieber stated.

He noted that the “overall picture of the countries of the Western Balkans region is that they have not made any progress in the state of consolidated democracy in the last 10 years”. He noted that there has been a trade-off between peace and democracy and the aim to secure peace if seen as a trade-off to creating a firm and established democracy.”

“There is an apparent paradox between lack of democracy and the process of joining the EU”, he added. Bieber introduced the new term – stabilitocracy – which means that the stability is given priority over democracy, which is what is happening in the Western Balkans.

“Political leaders are using autocratic way of ruling”, he noted and added that autocratic behaviour thrives and that the EU cannot turn the blind eye when it comes to these issues. Otherwise people would lose faith in the EU he said.

Dr Marko Kmezić, Lecturer and Senior Researcher at the Centre for Southeast European Studies at the University of Graz, Austria and BiEPAG Member said that democracy and freedom have been stagnating in the Western Balkans but they have also progressed in the negotiations on EU accession. „The EU has remained silent on things such as wiretapping and Savamala”, Kmezić said.

“Main message of this policy brief is that democracy should not be negotiable”, he added.

Kmezić said that they have prepared solutions and proposals for the EU in order to tackle these issues.

“One of the solutions is to be clear and to name the shortcomings of the governments. Second is to make negotiations more transparent, third is to gather expert opinions on a regular basis in the area of democratic consolidation, and one more would be to empower democratic forces in the region”, he explained.

Kmezić added that the EU should insist on the independence of the key institutions – judiciary, public prosecutor’s office and police, and their work should be systematically reviewed in order to pay closer attention to the informalities in their work.

“Chapters 23 and 24 should be open as soon as possible in all of the Western Balkans countries. EU should start up the screening process immediately”, he said.

“One of the benefits would be to replicate the success of visa liberalisation, increase the intensity of ties and linkages, limit the veto power of elites, but also to give the biggest leverage of the EU to influence the establishment of democracies”, Kmezić concluded.

One of the panellists was MEP Eduard Kukan, Chair of the AFET Working Group on Western Balkans and Chair of the Delegation to the EU-Serbia SAPC.

“This paper is coming in the very appropriate time”, Kukan stated.

“In the last two or three weeks, Western Balkan is coming to attention in the EU, and this attention should be followed up with some tangible solutions”, he added.

Kukan also noted that the important thing when it comes to this policy paper is that its authors understand the reality of the Western Balkans.

“Stabilitocracy is a new term, very good term and we should have to learn it and use it”, he said.

Kukan also referred to the state of democracy in the Western Balkans.

“Over the last couple of years, some of the issues were ’creeping’ on us, the most pressing ones are concerning the state of democracy in the Western Balkans”, he noted.

He expressed his belief that this paper is needed and useful and that this study is making a number of important points. Kukan commented on the main paradox of the EU integrations.

“There is a new paradox of moving closer to the EU but further away from democracy and the rule of law. The EU needs to deliver on the promises as soon as possible when the homework is done or it will lose its credibility”, he commented.

“Bringing the shadow of the past is not helpful or the enlargement process will become harder over the years as more countries become members”, Kukan added.

As he explained, nationalism is on the rise and it is fuelled by leading politicians who are benefiting by attracting the voters. Kukan said that in the EU nobody likes the word boycott referring to the situations in Macedonia, Albania, Montenegro and Kosovo.

Among the panellists was MEP Knut Fleckenstein, Member of the Committee on Foreign Affairs (AFET) and Rapporteur for Albania.

“It happens that a rapporteur falls in love with the country they are working for, and we sometimes want to help them by not looking too precisely at some things”, he said.

“We don’t improve things by speaking with our friends behind closed doors, we should be more precise and louder in order to be good friends, which means we can, that way, stop our friends from going in the wrong way”, said Fleckenstein.

He also added that democracy in the Western Balkans is damaged and that it seems much easier for those who are ruling the country to rule in an autocratic regime.

“There is a lot of room for improvement in the countries of the Western Balkans, and silence of the EU is not an option”, said André de Munter, Policy Analyst from Policy Department of DG External Policies who was the discussant.

He said discussed the current situation in the Western Balkans, referred to the situation in Macedonia and Serbia saying that these countries are experiencing a major rule of law issues and the EU is silent about it.

“Savamala event was not even mentioned in the Serbia 2016 Report of the European Commission, and when you ask the Serbian government, they will say it is internal issue”, he said.

The new BiEPAG study provides a list of policy recommendations in regard of the European integration of the Western Balkans region, which is closely connected with the current state of the democracy in the separate countries. The study is available here.