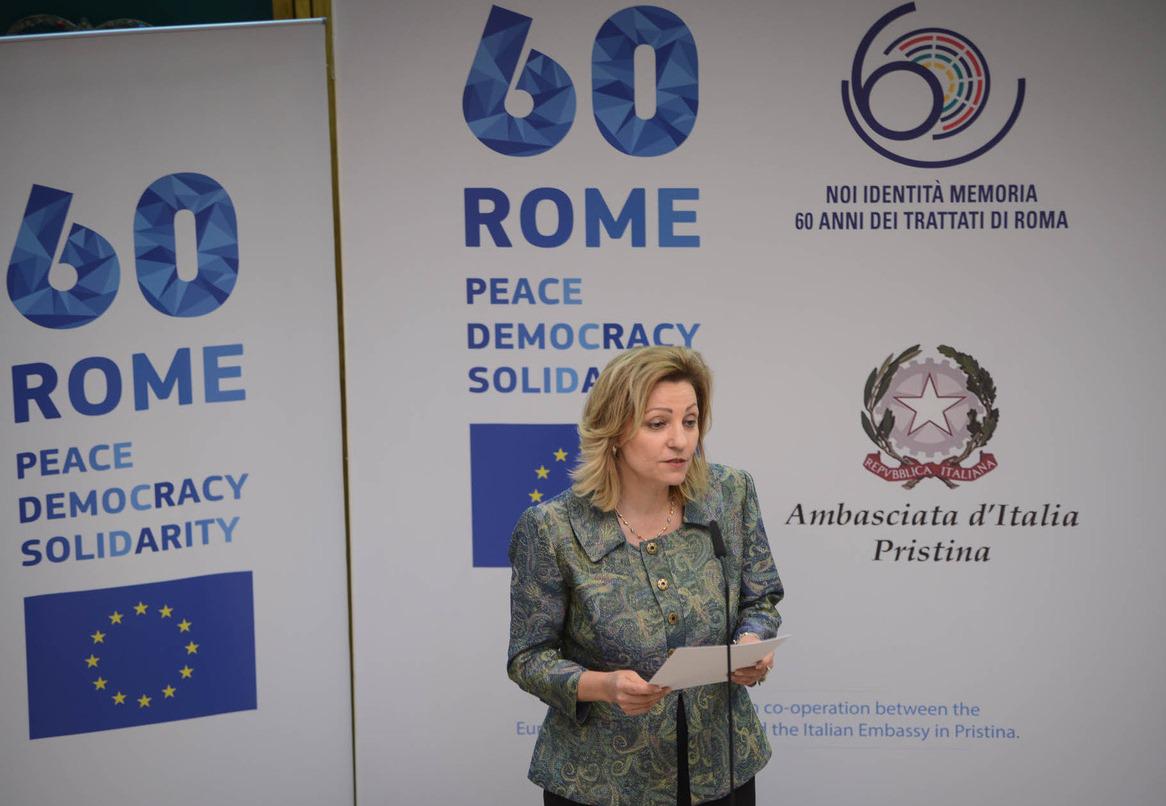 PRISTINA – On the occasion of the 60th anniversary of the Rome Treaties, Head of EU Office in Kosovo/EU Special Representative Nataliya Apostolova delivered an address in Pristina saying that the EU policy towards Kosovo remains firm and that Kosovo has a clear European perspective.

We present the Ambassador’s speech:

Many of us were not born when the Treaties of Rome were signed. Many of our countries (including mine) were not among the signatories of the Treaties. But, 60 years later here I am proudly representing the European Union in Kosovo: because of the heroic act of the Union’s founding fathers who had a strength to come together only a decade after a brutal war around the idea of peace, democracy and solidarity in Europe – the idea that resonates equally strongly today as it did six decades ago.

The fact that so many European countries decided to join the Union in the years and decades to come showed how visionary the founders were, and how much Europe has decided to embrace the values of solidarity, democracy, rule of law, freedom and human rights. I am happy Kosovo is among those who have embraced these European values, and is working to get them translated into stability, economic growth and prosperity for the people of Kosovo. The European Union is committed to Kosovo’s European future and we are eager to see Kosovo seize this opportunity.

Today we celebrate the signing of the Rome Treaties that transformed Europe. We admire the courage of the leaders which overcame national divisions to jointly build a vision. Their idea enabled millions of people to live in a Europe transformed from a continent of conflicts into a continent of prosperity. It was that visionary move that paved the way for a bright future. Kosovo too has to find courage and vision to move forward, to unite around the European idea, using the best and the brightest from all of its communities to build together a future of hope and a future of success.

Despite the challenges the EU is facing, we are confident that many more generations will experience the positive impact of the Rome Treaties that lead to a Europe “united in diversity” that recorded six decades of peace, prosperity and security. We have to make sure that the vision and work of the EU’s founding fathers lives on.

As the leaders of the 27 member states and of the European Council, the European Parliament and the European Commission declared on Saturday: “We want a Union which remains open to those European countries that respect our values and are committed to promoting them”. Kosovo, certainly, is one of them. And I believe that Kosovo shares the commitment of the EU leaders to the Rome Agenda this weekend to work towards 1) a safe and secure Europe, 2) a prosperous and sustainable Europe, 3) a social Europe, and 4) a stronger Europe.

So, at this important anniversary, I want to reiterate that EU policy towards Kosovo remains firm: Kosovo has a clear European perspective. The EU wants to see a European Kosovo prosper where there will be a bright future for its people and their children.