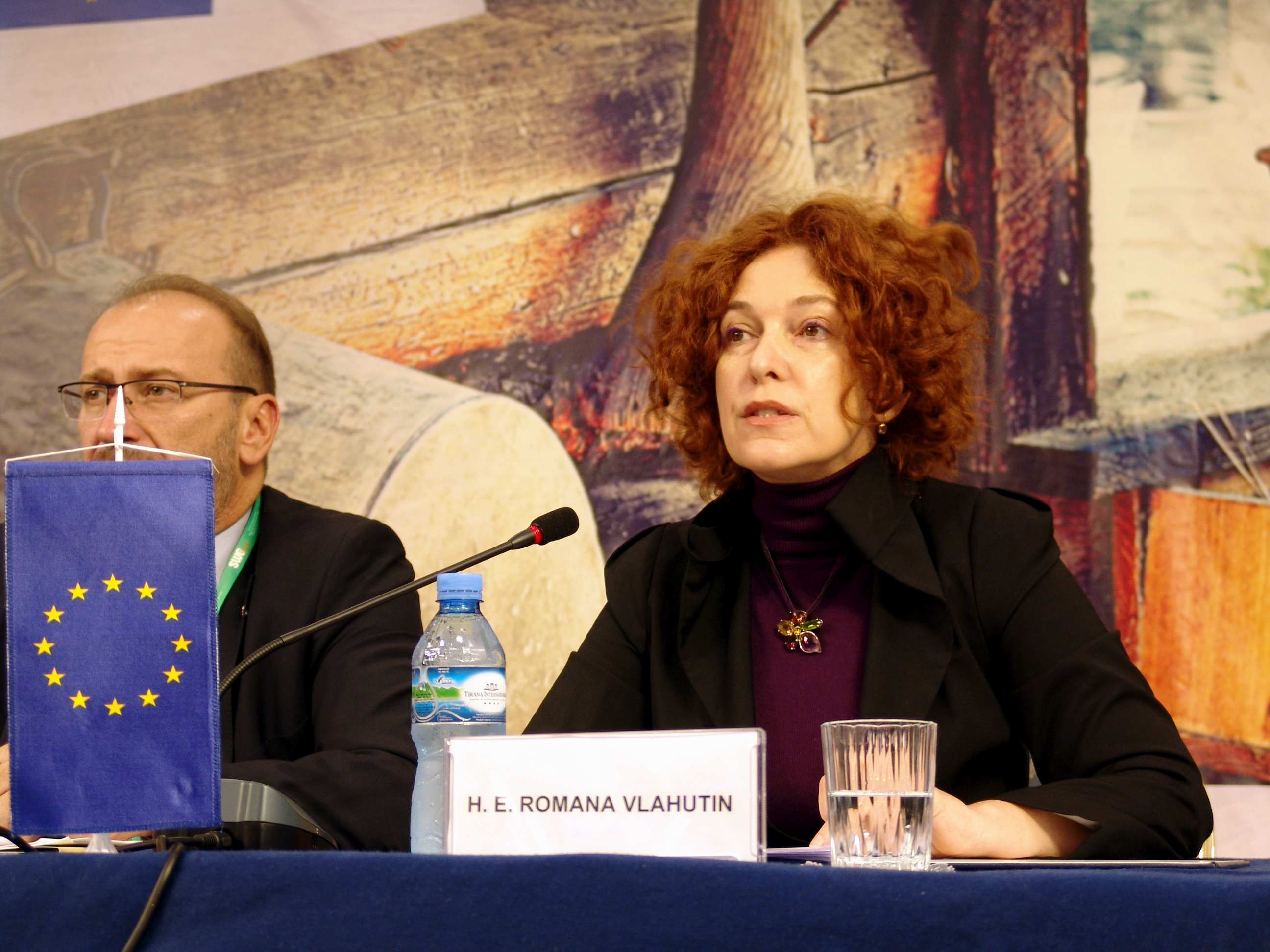 TIRANA – European project is about people, it is about citizens, about every and each of us. It is about the quality of our lives, that we are equal before the law, that we are safe and protected in what we eat and drink and breath, that we get proper health care, that our children have equal opportunities to get educated and employed, that our parents have support and care they deserve, said Tuesday EU Ambassador Romana Vlahutin on the occasion of the celebration of 60th Anniversary of the Treaty of Rome and opening of the EU Info Centre in Tirana.

We present the Ambassador’s speech:

It is a true pleasure and honour to welcome you today to celebrate a great anniversary, 60 years of the Treaty of Rome.

I am also happy that we are in the new premises of the EU Info centre in Tirana, neighbours to Regional Youth Cooperation Office and in the heart of university and political life of the country.

Sixty years ago, European Union’s founding fathers (and mothers) sat together to build a common future based on peace, solidarity and democracy. Still today, it is difficult to believe that the Treaty of Rome was signed only 12 years after the end of the most destructive war.

We are all indebted to the vision, wisdom, courage and sacrifice of that generation, which understood that being selfish and attending only one’s own interests creates more weakness than strengths, and that true strength and power come only when we work together for a common cause. On the greatness of their values has grown a Union of Member States representing more than 500 million people.

Let me quote from the Rome Declaration that our representatives have signed two days ago: “We have built a unique Union with common institutions and strong values, a community of peace, freedom, democracy, human rights and the rule of law, a major economic power with unparalleled levels of social protection and welfare.

European Union started as the dream of the few, it became the hope of the many.”

Over the past 60 years, the drive towards Europe has been an agent of change in all those countries. Today it is not even possible to imagine what a world we would live in if there was no the strength and partnership of European Union in integration of former Central and Eastern European countries after the fall of Berlin Wall and dissolution of Soviet Union. This is probably the biggest achievement of peaceful transition in world history.

At the same time, the wars in former Yugoslavia made it very clear that peace is not given, and stability is something we need to work for every single day. It was again the power of the European Union enlargement policy that helped people in the region to pick up their lives, stand up on their feet and build a new future.

European project is about people, it is about citizens, about every and each of us. It is about the quality of our lives, that we are equal before the law, that we are safe and protected in what we eat and drink and breath, that we get proper health care, that our children have equal opportunities to get educated and employed, that our parents have support and care they deserve.

From inside the EU, it is often too easy to take those achievements for granted. But from Albania, where so many people aspire to, and deserve, the same rights and opportunities as other citizens of this continent, the success of the European project strikes as remarkable.

Therefore, today we also reaffirm our commitment to a united European future that includes the Western Balkans. The High Representative Federica Mogherini in Tirana at the beginning of the month, and the EU Heads of States a few days later, were all very clear: the EU will not be complete without the Western Balkans.

That is why I am very happy that the anniversary coincides with the re-opening of the EU info centre in Tirana. We now have a fantastic space in the heart of the city to help us support EU integration through open and lively discussions, new ideas and the dialogue as a fundamental European values. We want this centre to be full of life, passion and debate. This is your space, and I hope you will make the nest use of it.

Everyone should be free to enter and ask for explanations. EU integration is not only a process between European institutions and the Albanian Government. It is a process with Albanian people at its core.

It will take lot of resilience, loads of energy, knowledge and trust in your own capacities to come to the end of the journey. But first and foremost it takes courage, to make some bold decisions, and never to be afraid of obstacles along the way.

You decide, and it is your choices, individual and collective, that will determine the future of Albania as a member of European Union.

In the end, on behalf of the EU, I would like to thank you for being here, for being with us, for the support and friendship, and above all for the common vision of this great Union of ours.

De Munter: Rome Declaration sounds like 'please do feel welcome, but certainly not any time soon'