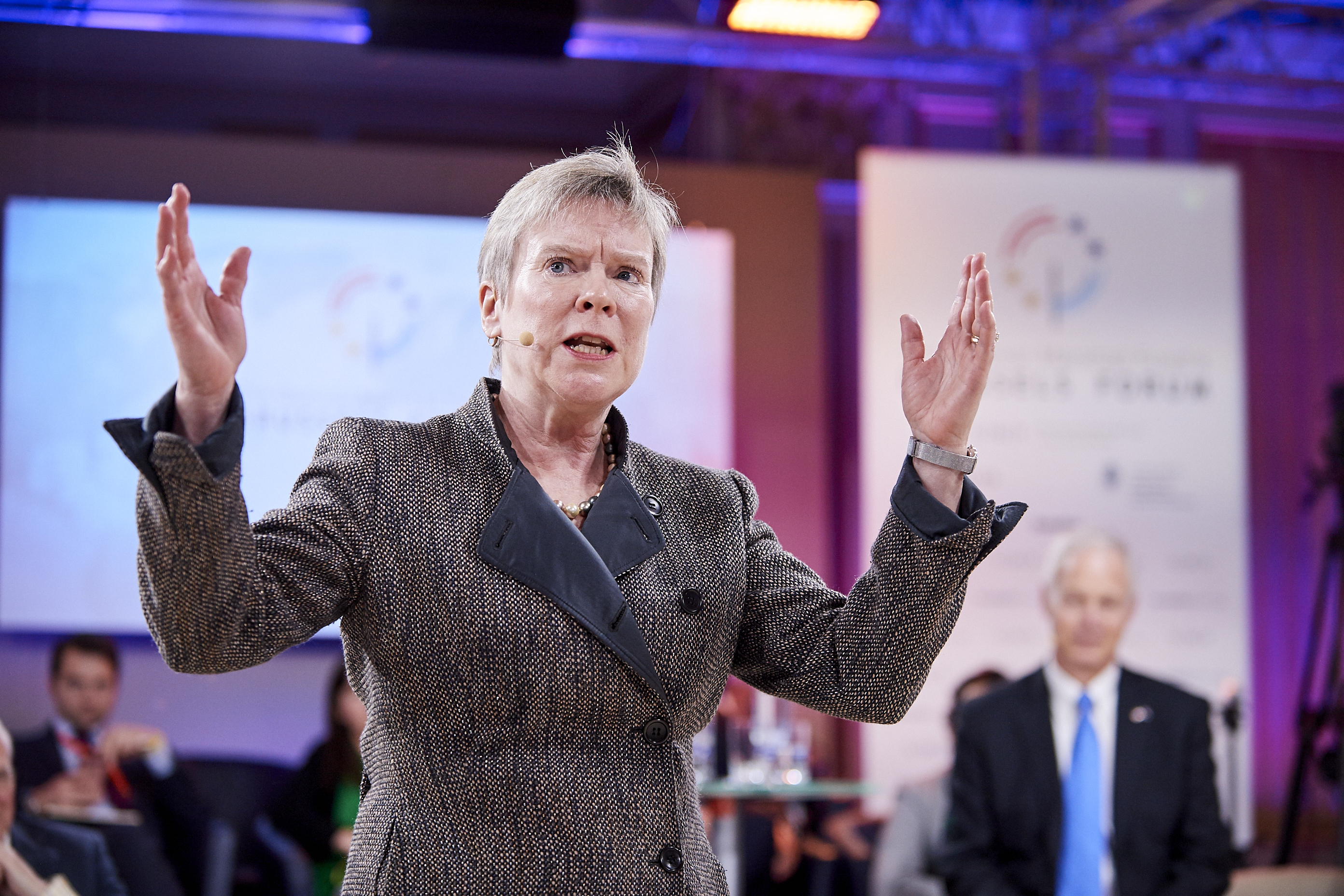 For example, I have just been reflecting on the aftermath of the coup attempt in Montenegro, where Montenegro dove in immediately with a proper legal and judicial process involving essentially all the rule of law instruments that are available to the Montenegrins, and they got the Serbians to join in their effort to investigate the coup. So, it lends the confidence to the process that they followed proper rule of law procedures. I think the instruments are there in the Western Balkans to tackle these problems, but there are challenges from within.

EWB: How do you see the importance of NATO for the stability in the Western Balkans, especially in Bosnia and Herzegovina and Kosovo?

RG: I think it is really important what NATO has been doing to build institutions in Bosnia and Herzegovina. For example my boss, Jens Stoltenberg, the Secretary General of NATO, was just recently out there, at the beginning of February, and he came back with a very strong impression of the construction work that NATO has been doing on the national army in BiH. As Jens likes to say – 20 years ago there were three separate fighting forces in that region, fighting each other, and now through the training efforts that NATO has undertaken over the years, building up defence capacity and defence institutions, there is a national army that is multi-ethnic and a very good fighting force, but one that is again under the influence of the rule of law. He is very articulate on the score, so I am just basically saying what he says, but he saw with his own eyes not so long ago. I think that is a good example of the kind of thing that NATO was doing in the region, including Kosovo and building up the Kosovo Security Force.

One important thing that is often talked about is as if there is a competition going on between NATO and Russia in Serbia for example, but we do not see it that way. I think any country anywhere in the world, and this is a basic principle for NATO, must be able to exercise its own decision-making with regard to the security relationships it chooses. From our perspective, it is important that Serbia has come to NATO and asked us for cooperation to help build up some of its defence institutions, and we have a very good partnership plan with Serbia, and if they also choose to work with Russia, that is up to them.

EWB: There has been a lot of talk about this Russian influence in the Western Balkans, and not only the Western Balkans, but also in Europe, especially regarding Russian soft power – media, etc. What do you think should be NATO’s strategy of countering this kind of Russian soft power when it comes to promoting their own ideas and views in the Balkans?

RG: The most important thing NATO can do is not descend to the Russian example. NATO does not fight propaganda with propaganda, but NATO brings forward information, facts, tries to get the real picture out there and let people judge for themselves. That is what we like to emphasise, and it has been of a concern to me to see how propaganda at times seems very explicitly designed to whip up tensions and to create differences, to create fissures in societies. How we think of the role of information is to get the real story out there and let people judge for themselves. Once again, I think that is an important point, that is what NATO is doing – trying to be an as honest broker as possible, in terms of providing information and facts.

EWB: There is now a crisis in relations between the European Union and Turkey. Frequently, when talking about the Russian soft power, usually in the same sentence you can see mentions the Turkish soft power and the Turkish influences. Now, Turkey is a part of NATO. Would you considerate Turkey to be a reliable partner in the Western Balkans, despite the turbulences between the EU and Turkey at the moment?

RG: Turkey is a reliable ally, full stop, and a much-valued ally as well. Clearly, Turkey is got its own internal issues to deal with, there was a coup attempt this past summer that was extraordinarily serious, so the Turkish government is grappling with those issues, but in terms of Turkey’s role in NATO, I just want to underscore that it is not only a valued ally, but a longstanding ally.

EWB: Speaking about Montenegro, it is a small state with around 600.000 people living there with the less than 2.000 soldiers. We previously asked senator McCain the same question, why is the accession of Montenegro so important for NATO despite its small size and its small army

RG: First of all, I think it is an important sign and signal that NATO’s open door policy is alive and healthy. I get asked quite often – is it really true you got an open door policy? Well, there is an example. And by the way, I hope Senator McCain mentioned this to you that now the road is open for the accession vote to go forward in the US senate this week, so fingers crossed that all goes smoothly, but the fact that the Senate leader Mitch McConnell has scheduled a cloture vote that will be followed by the actual vote on the accession agreement is very, very important. I am really glad about that.

The second thing is NATO in building up first partnership relationships, as we have had with Montenegro. I mentioned BiH, and KFOR in Kosovo – it is also a way to lend not only healthy institutions to the region but also, as we see it, stability and security. Having Montenegro participate in the Alliance as a full ally, we see being a positive influence in the region as a whole, so that is another very important reason. There is such an important and long process of partners being brought into the Alliance, that we believe by the time an ally is ready, they are a net, as we say – exporter of security, they are capable of participating and lending their presence to security challenges that NATO is wrestling with. Montenegro is already doing that in the way they are cooperating with the Alliance as a partner state. We see that Montenegro will not be a drag on the Alliance in any way, shape or form, but rather a valued addition to the Alliance.

EWB: Talking about other countries in the Western Balkan, now for example yesterday was the 18th anniversary of the beginning of NATO bombing of Serbia, and recent research shows that a very small number of people actually would vote for NATO accession, so in this regard, we can hardly expect there will be significant desire to join NATO in the near future. Do you believe that it is necessary for all the Western Balkans state to join NATO to achieve stability in the region or you believe that the current existing framework of cooperation with IPAP (Individual Partnership Action Plan) is enough to achieve the goal of stability?

RG: We believe it is important that the principle is upheld that nations have the right to choose their own security arrangements and relationships. It is entirely up to the Serbian people and the Serbian leadership how they want to build their relationships. We are glad that Serbia is a partner of NATO and willing to work with us in the IPAP, which for the first time came to us in the 2015, so it is a pretty recent phenomenon. It is really good we have one now, that is a kind of platform or foundation that we can build on and we hope we will have the opportunity to do so. But, again, it does not foreclose Serbia having relations with other security partners, that is all there is to it.

The simple answer to your question is – no, it is not necessary for all the Western Balkans states to join NATO moving forward, and it is really important, I think, that everyone is building their institutions and building their capacity to fight those internal challenges, such as corruption.

EWB: Recently, there was a letter sent by the governments of Albania and Croatia, so two NATO member states, about the situation in Kosovo, how it can deteriorate. Do you believe that the crisis in Kosovo can escalate and does it represent a serious security concern?

RG: I think across the region obviously, there are some difficult circumstances now, there are a number of elections going on, there are issues to do with completion of the electoral processes and I am reflecting here on FYROM and what is happening there, so I do think that it is an unsettled period for the Western Balkans. There is no question about it and so I think it is important for NATO to be paying attention. That is one reason, and Jens Stoltenberg was there, so it is important for NATO to be working together with the EU. You may have noticed that from time to time the Secretary General Stoltenberg and Madam Mogherini have commented on situations and tried to really underscore the point that the governments in the region must, again, pay attention to electoral processes and their own constitutions in trying to advance policy. It is a very difficult time at the moment.

I would not just point to Kosovo, by any means, but I think what NATO can do is be present in the area, continuing to work on the training missions and so forth, continuing to respond in other arenas. When I first took this job I came to Montenegro for the Disaster Assistance exercise that was going on there and if there were, heaven forbid, some kind of fire or flood in the Western Balkans and if the country involved asked for NATO’s help, we have disaster assistance groups that would have come and help. There are various ways that NATO can be present and help but I think it also is important that NATO leadership is articulating overall what the basic principles and the goal should be.

EC: Migrants will not be returned to Serbia

Statements on the decision of the Republika Srpska government