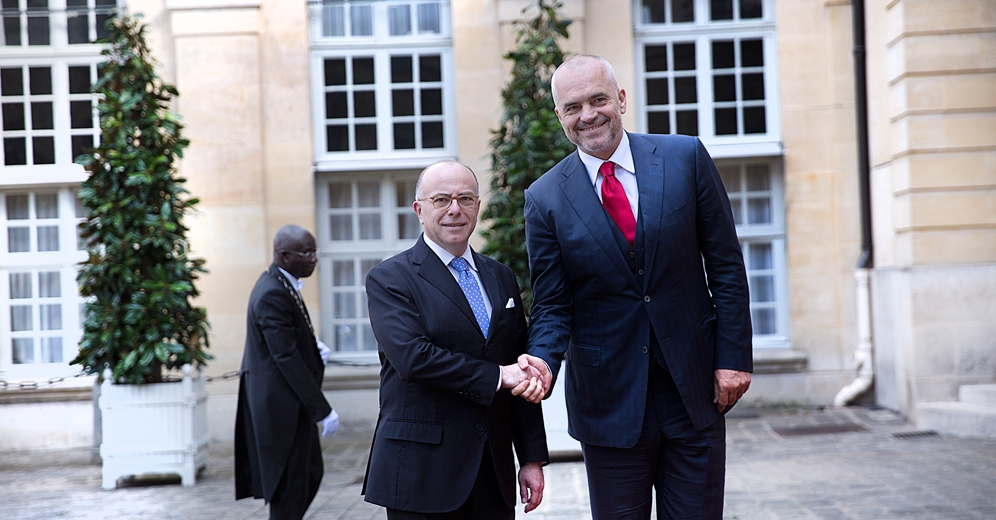 TIRANA – During the visit of Albanian Prime Minister Edi Rama in Paris, the two governments have signed a series of agreements elevating the framework of bilateral cooperation Albania- France to a strategic level, ATA reports.
During the visit, the sides took the opportunity to confirm the special relations between Albania and France as well as the importance of long-term co-action between the two countries in the rule of law, defense and security at bilateral, regional level and further.

At the meeting with his French counterpart Bernard Cazeneuve, PM Edi Rama conveyed his thanks on behalf of Albanian govt. for France’s support in the process of European integration as well as increased attention and dedication of France to the advancement of regional processes and projects.

For his part, PM Cazeneuve appreciated the progress of Albania and the reforms in the field of rule of law, successful efforts in the fight against corruption and organized crime. French PM thanked the Albanian side for cooperation with French authorities in the fight against terrorism and violent extremism.

Interlocutors cited the trilateral importance of justice reform enactment calling it a crucial reform to restore the credibility of justice institutions as well as enhance its impact in the field of security and reinforce the rule of law in economy. The French side underlined the special role of Albania in the region’s democratic stability.

At the end of the meeting, also in the presence of two PMs, Minister of Foreign Affairs Ditmir Bushati and French ministers Fekl, Desir and Todeschini, signed the strategic partnership declaration between the two countries and agreements in the field of defense and security.