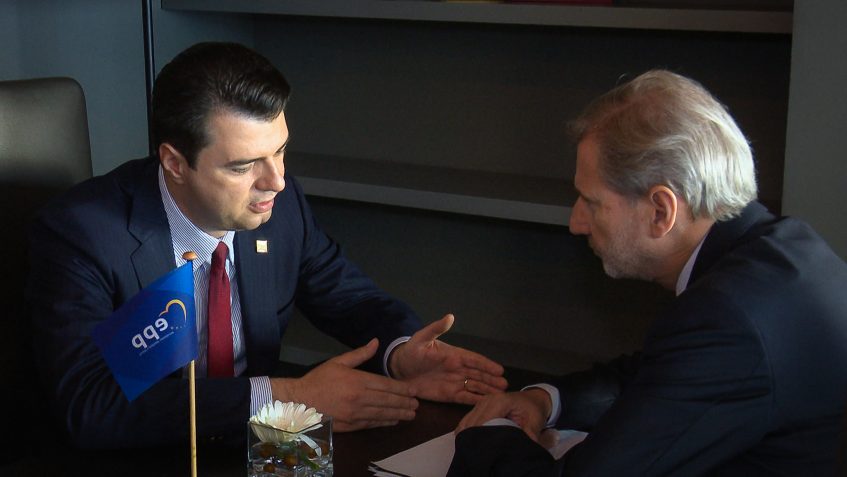 IRANA – The chairman of the Democratic Party in opposition in Albania Lulzim Basha met with top leaders of the European institutions and of the right-wing parties, ATA reports.

The DP press office reported that during his meeting with Johannes Hahn, Commissioner for European Neighborhood Policy and Enlargement, Basha focused on the political developments in the country and emphasized that the only breakthrough from the crisis is forming a technical government which would pave the way to free and fair elections and go ahead with the work for implementation of the reform in the judiciary according to the constitutional amendments of July 22.

While during his meeting with the President of the European Parliament Antonio Tajani, the chairman of the DP Basha highlighted the importance for the elections standards for the country’s stability. Basha voiced his concern that under the current situation of crime, drugs and drugs money related to the government there can be no free and fair elections.

During the meeting with vice chairman of the CDU / CSU parliamentary group of the Federal German Parliament, Friedrich Merz, the talks focused on the crime and drugs situation in the country, which is confirmed even by the recent reports of the Europol and the U.S. State Department.

Mr. Basha emphasized that the battle in Tirana is for the European values and the free and fair elections are in the core of it. The Albanians deserve the same standards as the European citizens, said Basha and found the good understanding and support of most important leaders and European institutions.