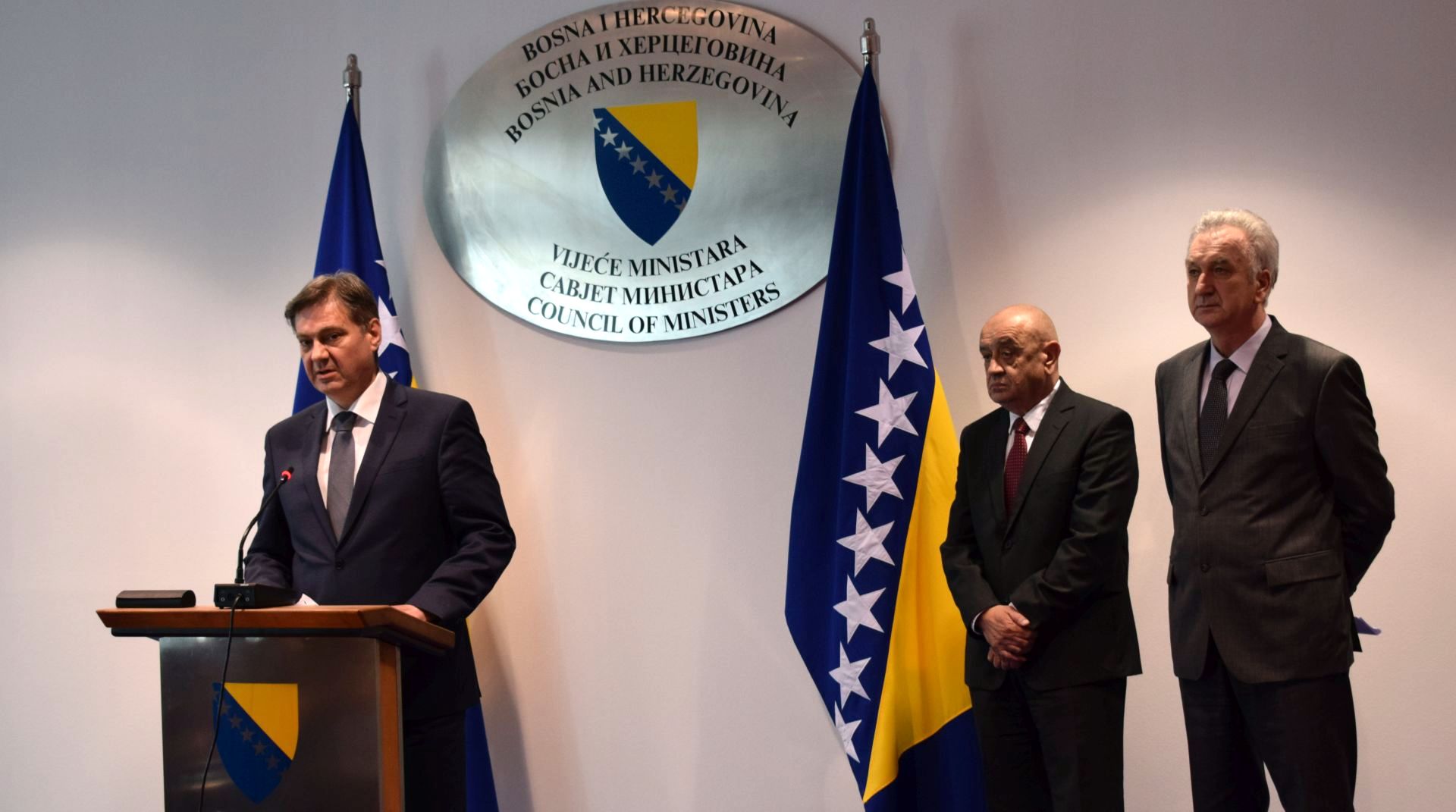 By adoption of these laws, additional 15 pfennigs will be secured from excises on oil and oil products for construction of highways and roads, which will enable the activation of already concluded loan agreements with the European Bank for reconstruction and development, Kuwaiti and OPEC Funds, in addition to the continuation of the MF arrangement.

The adoption of the comprehensive Law is intended to improve financial stability and harmonise this piece of legislation with the relevant directives of the European Union. The new Law enables deponents’ protection during BiH banks transformation, and establishment of a deposit insurance fund in BiH.

A need for such law appeared due to the fact that new amendments and supplements would change more than 50 per cent law provisions.

A set proposal laws, by which the Council of Ministers fulfils its obligations from the Letter of Intent with the IMF, will be provided to the Parliamentarian Assembly of BiH for consideration under an urgent procedure.

Also, upon a proposal of the Ministry of Finance and Treasury, the Council of Ministers took a decision on implementation of measures for reaching qualitative criteria and indicative goals agreed under the Letter of Intent according to an Extended Arrangement with the International Monetary Fund for Bosnia and Herzegovina’s Institutions.

Under the Letter of Intent, the BiH Institutions are obliged to enable setting funds aside for salaries and emoluments for 2017 in amount of KM 655 million.

The Council of Ministers of BiH committed not to change coefficients in the course of 2017 nor basics for salary accounting, or level of other emoluments to employees, but would apply the existing regulations on the basis of which the 2017 Budget of BIH Institutions and International Obligations of BIH was planned.

The Council of Ministers will report the IMF quarterly on the realisation of the decision.

At extraordinary session, held on March 31, the Council adopted Information of the Ministry of Foreign Trade and Economic Relations on removal of the problems in connection with the entry of sorts into the Varieties’ List of Bosnia and Herzegovina, aiming solving the disturbances at the market and enabling agricultural producers in BiH to increase the volume of production and competitiveness.

The BiH Phytosanitary Administration is tasked to draft a rulebook on work of a joint committee for sorts of agricultural herbs in BiH and to start entering the sorts into the Varieties List of BiH.

Also, the Administration would be in charge to make urgent amendments or supplements to the Regulation on recognition and entering of sorts into the BiH Varieties List, in order to facilitate and accelerate a direct recognition and entry of sorts that were tested, recognised and entered into respective varieties lists of the BIH neighbouring countries having similar agro-ecologic features.

The Council of Ministers of BiH recommended to the Entity Ministries of Agriculture to harmonise as soon as possible the Entity laws and regulations o production, preparation for marketing, export and marketing of seeds and seedlings of agricultural herbs with the Law on Seeds and Seedlings of Agricultural Herbs of BiH, and to continue cooperation with the BIH Administration for Phytosanitary Protection.

It also endorsed an initiative of the Ministry of Finance and Treasury and set-up a negotiating delegation for conclusion of a Loan Agreement between Bosnia and Herzegovina and the International Bank for Reconstruction and Development for the Banking Sector Strengthening Project.

The Loan worth USD 60 million will be allocated in equal shares, of USD 30 million to each the Federation of BIH and Republika Srpska, and it will be of a 30 year repayment term and 17 year grace period, with favourable EURIBOR interest rate.

This way the banking sector is meant to be improved by improvement of the regulation, supervision and restructuring capacities of banks, with strengthened management of the Entity development banks and creation of better conditions for addressing the weaknesses in the sector.

Upon a proposal of the Directorate for European Integrations, Council took a decision on institutional designation of work groups in the system of coordination of the European integrations process in Bosnia and Herzegovina, in accordance with the European Union acquis.

Lavrov: Montenegro succumbed to the ultimatum