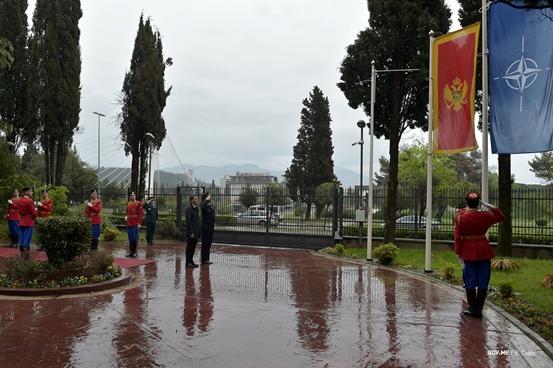 PODGORICA – “Marking the 4 April, a day when NATO was established, will become a tradition, as is marking the Day of the Army of Montenegro. It is a date that will become part of the history of the future of Montenegro, as it testifies to the fact that our country is thinking about itself, its future and the security of its citizens for the first time,” Minister of Defence Predrag Bošković said at a ceremony, by which the Ministry of Defence marked the date when foreign ministers of the United States and 11 Western European countries signed the North Atlantic Treaty on the establishment of NATO in Washington, D. C. in 1949, Montenegrin Ministry of Defence reported.

Minister Bošković stressed that the main foreign policy objectives, which are Euro-Atlantic integration and NATO membership, are being reached in the best way.

“Most importantly, we provide Montenegro with what has often lacked for centuries, namely peace, stability and security,” Montenegrin Minister of Defence said.

Once the least developed member state of the former Yugoslavia, as he reminded, will become a part of community of the most developed countries, only 26 years after the breakup of the former country, not only from an economic point of view, but rather from the point of respect for human rights, rule of law and everything that makes today’s modern society prosperous and advanced.

This morning, in front of the Ministry of Defence of Montenegro in Podgorica, NATO flag was solemnly raised next to the Montenegrin one, since this year’s Day of the Alliance is of special importance, in view of the forthcoming Montenegro’s NATO membership and the Summit in Brussels.

Minister of Defence Predrag Bošković and Chief of the General Staff of the Armed Forces Lt. Gen. Ljubiša Jokić went through the ceremonial gauntlet of members of the Montenegrin Army Honor Guard and greeted two flags in the presence of members of Minister’s and Chief’s cabinets.

Albanian Parliament to convene in extraordinary session on Cabinet reshuffle, Vetting and CEC