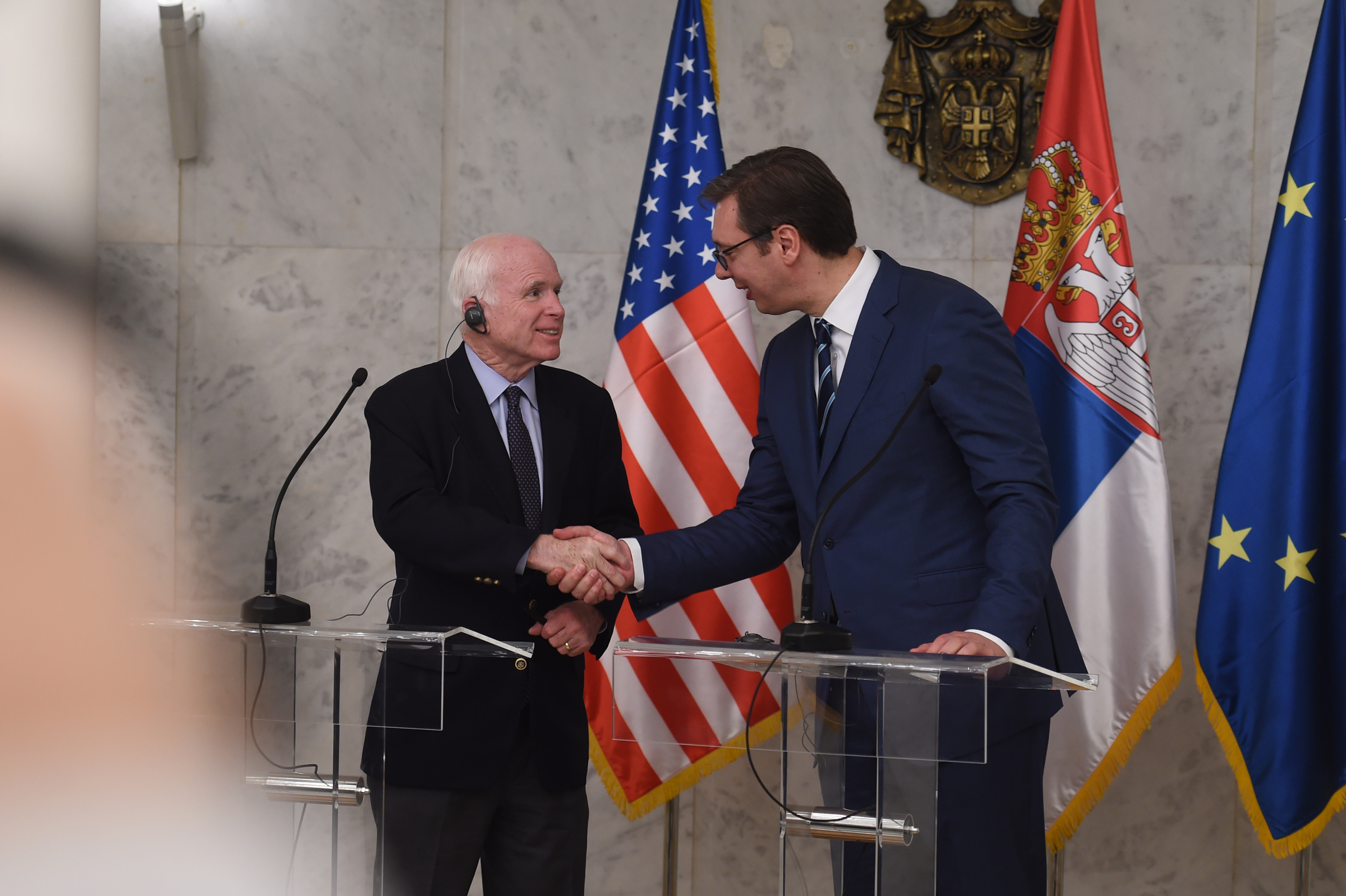 John McCain and Aleksandar Vučić; Photo: Tanjug/Dragan Kujundzic
BELGRADE – Serbian Prime Minister Aleksandar Vučić said that at Monday‘s meeting with US Senator John McCain they talked about the maintenance of regional peace and stability, as well as the mutual relations between the two countries, Serbian government stated.
Vučić said at a joint press conference with McCain that one of the topics of discussion was the participation of Serbia in mixed military exercises, with emphasis on the persistence of Serbia’s military neutrality.

“For our soldiers and officers it is essential to take part in joint peacekeeping operations,” he said and recalled that last year they completed eight major joint exercises and about a hundred joint activities.

Vičić said that he presented Senator McCain the situation in the region, especially Belgrade’s initiative to continue the dialogue with the Albanians in Brussels and said that our country will invest a lot of strength in the preservation of peace.

McCain congratulated Vučić on victory in the presidential election and promised all possible support of the United States to Serbia on its European path, considering the fact that it plays a vital role as a force for reconciliation and is the main economy in the region.

He also expressed appreciation for the role of Serbia in the coalition against the Islamic State, pointing out that our country is one of the most active partners of the United States in mixed excercises.

The Senator, as a former pilot, expressed condolences to the families of the dead pilots “Super Galeb G-4” and all citizens of Serbia.

They also discussed situation in Macedonia.

As Macedonian news agency Meta reports, Vučić hopes that things in Macedonia will develop in a peaceful manner and with respect for Macedonian law.

“For us, it is very important, because if the Albanians are unhappy, we may have a problems in the South of Serbia. If the Macedonians clash with each other, which nobody wants, there will be large and heavy consequences. Not to mention that it would lead to uncertainty and a withdrawal of investors”, stated Vučić at a joint press conference.

He added that the preservation of stability and peace in the Western Balkans is of crucial importance for the region.

McCain stressed that everything happening in Eastern Europe is vital to the security of the US and nothing should be allowed to happen, which could worsen the situation in the region.

Apart from the region, Vučić and McCain discussed the dialogue between Belgrade and Pristina, Serbia’a path to Europe and bilateral cooperation between Serbia and the United States.