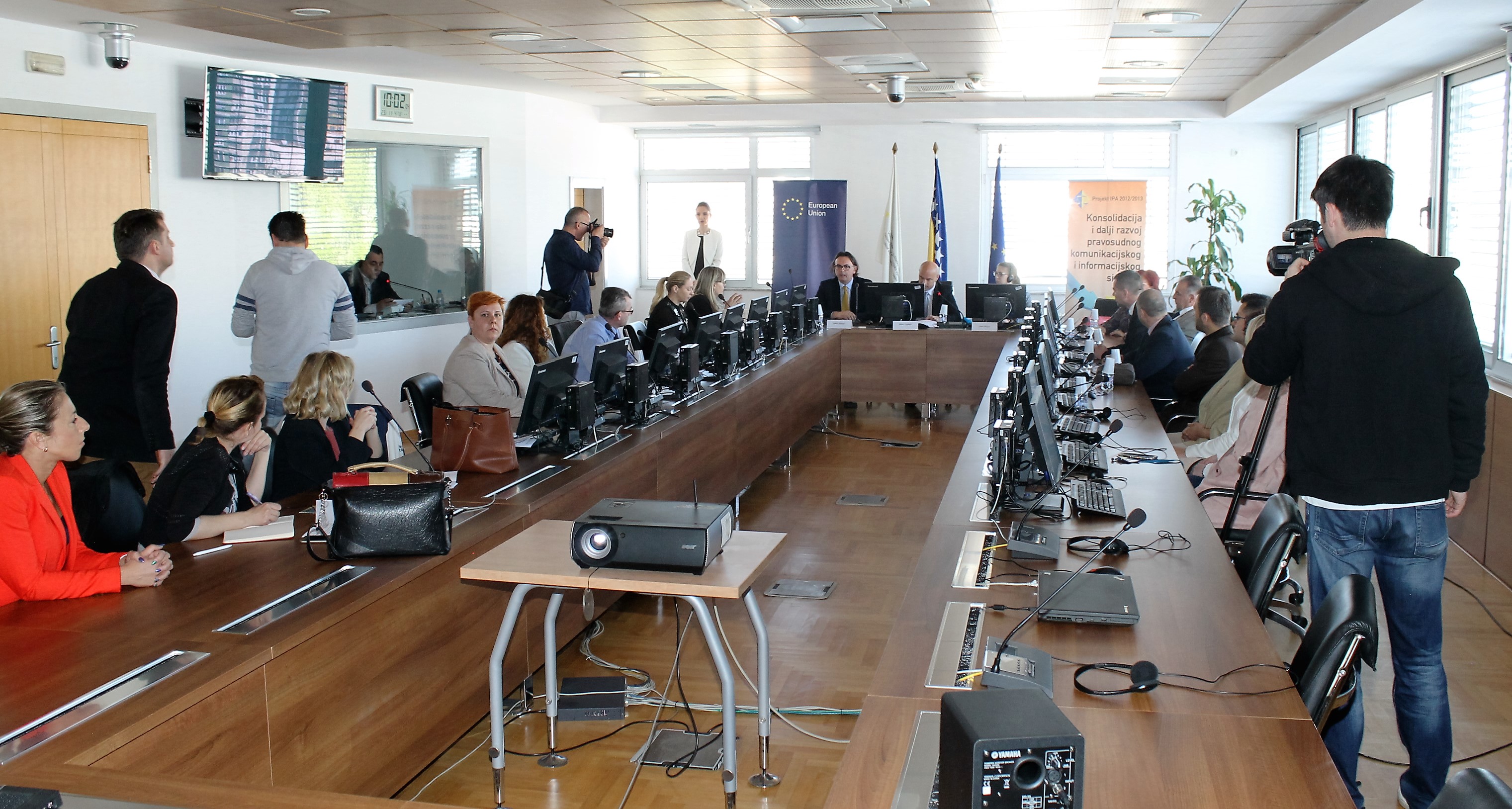 With the EU IPA assistance, the High Judicial and Prosecutorial Council of Bosnia and Herzegovina (HJPC BiH) has developed a number of IT tools used by the courts and prosecutors’ offices allowing them to provide faster, more effective and more transparent services to citizens. On this occasion, a new information system for the advancement of courts’ and prosecutors offices resources management was presented.

In his opening address, President of the HJPC BiH Milan Tegeltija expressed his sincere gratitude to the European Union on the behalf of the BiH judiciary for its lasting support, stating: “The support of the European Union to the BiH judiciary was and remains essential in achieving sustainable results towards guaranteeing access to justice for citizens, providing citizens with new services and contemporary ways of getting information from courts. Everything we have been working on in the past years and what we continue doing – ranging from improving judicial infrastructure, regulating the work of judicial office holders and following up on their outputs, strengthening their competences and providing them with tools in their everyday work – feeds into the most important objective – ensuring that the judiciary provides timely and quality services to the citizens of Bosnia and Herzegovina in line with European standards.“

Chloe Berger, Head of Section for Justice and Home Affairs and Public Administration Reform at the EU Delegation to BiH, said: “The EU, as a key donor, has provided support to the development of a modern BiH judiciary with a focus on the use of information and communication technologies and performance management which have helped in providing better, faster and more transparent services to citizens. Such IPA assistance is fully in line with the priorities established themselves by the authorities of Bosnia and Herzegovina in the Justice Reform Sector Strategy 2014 – 2018 (JSRS) and in the Reform Agenda.”

Director of the HJPC BiH Secretariat, Admir Suljagić emphasised this institution’s commitment and strong track record in employing information technologies for addressing needs and issues faced by the judiciary in its work and providing better services to citizens.

Mr Suljagić pointed out that the system presented today is more than an IT solution. “This system is a confluence of theories, processes, architecture and technologies which transform raw data produced daily by the judiciary into practical inputs essential for fact-based decision making and effective operating of courts and prosecutors’ offices. It will provide court presidents and chief prosecutors a real-time overview of the institution they are managing, thus helping them become better leaders in the judicial management system.”

In addition to court presidents and chief prosecutors who will use the system in making informed managerial decisions in individual judicial institutions, the first institutions that will become users of this system beyond the judiciary are ministries of justice at the Entity and the state level, as well as Brčko District, while the HJPC BiH representatives also expressed openness towards establishing cooperation with other organisations that require direct access to statistical information on the BiH judiciary.

Since 2004, the EU, as a key donor, has provided support to the development of a modern BiH judiciary with a focus on the use of information and communication technologies and performance management which have helped in providing better, faster and more transparent services to citizens.

The process of modernisation of the BiH judiciary undertaken by the High Judicial and Prosecutorial Council of BiH from its inception was made one of its top priorities.

Introducing new procedures and tools supported by IT solutions made a remarkable change in the way how the judiciary operates today, compared to the situation of 2004 and 2005. The EU assistance provided during this period encompassed development of the country-wide communication network, supply of IT equipment to courts and prosecutor’s offices and development of the key information systems used daily by the judiciary and citizens including the Case Management System (CMS/TCMS), web portal and on-line services.

The EU has also recognised the negative effects of inadequate infrastructure for the efficient operation of courts and prosecutor’s offices and therefore provided about EUR 19 million of  IPA funds for the (re)construction of judicial and prosecutorial premises. Twenty judicial institutions all over Bosnia and Herzegovina are being constructed, modernised and renovated. In addition, the EU supported the adaptation and equipping of eleven courts in line with witness protection standards.

As a part of the broad-justice sector support provided by the EU in the recent years, the BiH judiciary’s capacity for processing war crimes cases is being strengthened with about EUR 15 million of IPA assistance, enabling it to process war crime cases more effectively.

Overall, the European Union remains focused and responsive to the most prominent needs of the BiH judiciary in tackling existing and imminent challenges. The partnership between the Delegation of the European Union to BiH and the HJPC remains a vital part of the efforts for betterment of the BiH judiciary and its ability to fulfil the requirements for EU accession in the coming years.

Dimitrov, Taleski: Republican Senators should not side with Russia on Macedonia

Orav meets with Nedelkova to discuss reforms to the Judiciary