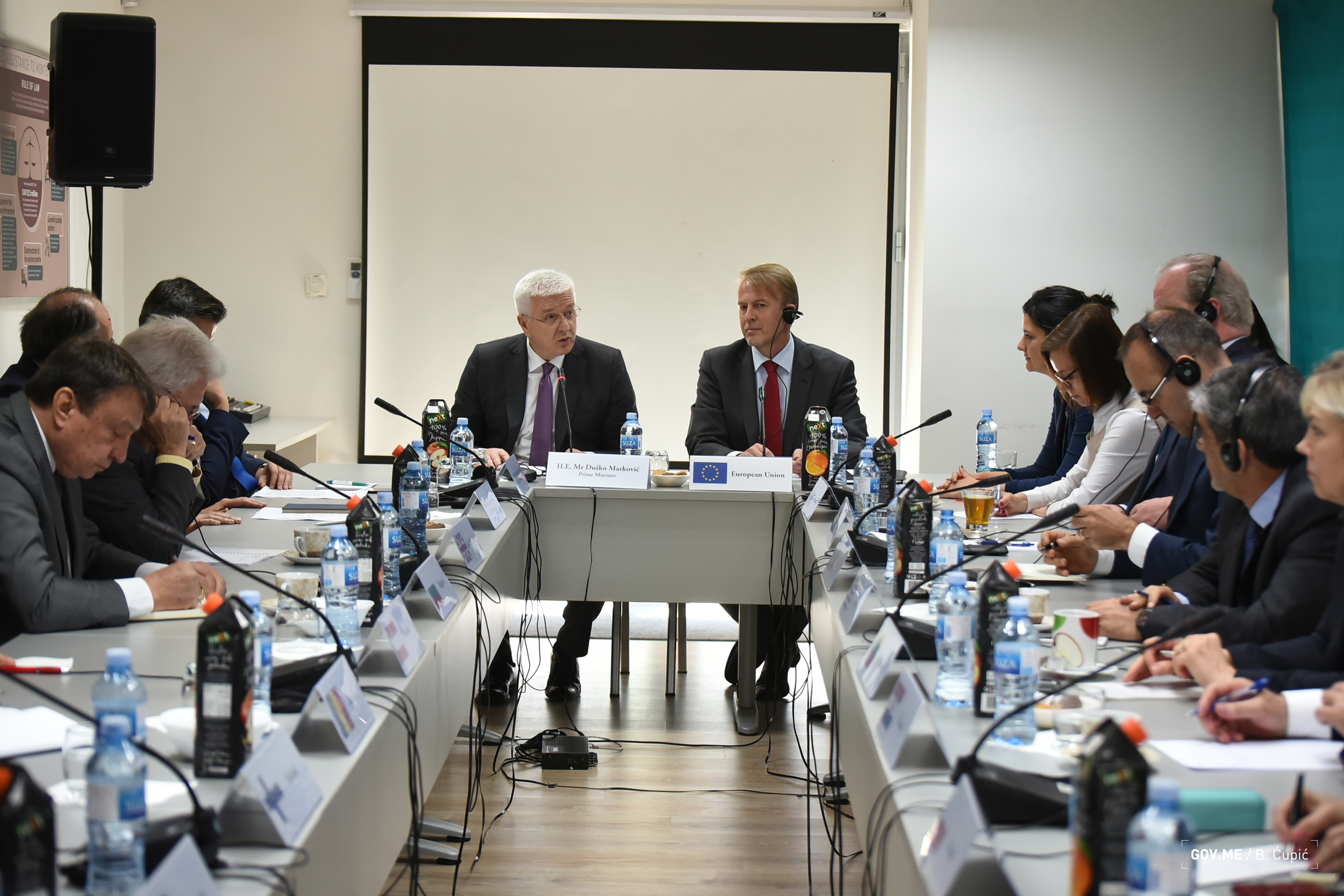 Thanking the host for the invitation to take part, PM Marković noted in his opening address that the ambassadors have witnessed the challenges the Government faces every day, as well as the efforts it has invested towards resolving the current issues.

“For us, membership in NATO means the recognition of the country’s commitment to meet standards of the Alliance. Ratification of the North Atlantic Treaty in the Montenegrin Parliament is ahead of us. The ruling majority, primarily taking into account the interests of the citizens, is willing to comply with the Constitution and use vote to reach the decision. Thereafter, the ratified document will be forwarded to Washington, which will be followed by the raising of the flag of Montenegro as the 29th member state of the Alliance at the NATO headquarters in Belgium… I would like to thank once again NATO members for rapid ratifications of our Accession Protocol,” the Prime Minister underscored.

He added that the completion of ratification of the Protocol is followed by fierce reactions by certain forces, who come to realise they are losing the battle with the will of the people, but also with the State.

“This week we will be witnessing the issuing of an indictment in the case of attempted terrorist attacks of 16 October, since all the capacities of the Special Public Prosecutor’s Office and police are focused on the most important case in recent history. Part of the opposition panicking about the whole matter speaks volume,” said the Prime Minister.

In that regard, he stressed the continuous disavowal of the Montenegrin justice system, and in particular the Special Prosecutor’s Office.

“They are attempting to challenge credibility of the Special Prosecutor’s Office. I firmly believe that a clear indictment and transparent judicial process will soon put an end to this case, and that it would send a clear message to perpetrators of this evil act and all the masterminds and financiers never again to dare to shake the foundations of the State,” said the Prime Minister.

Speaking about European integration, Prime Minister stressed that the Government is firmly and fully determined to continue the dynamic process of integration of Montenegro into the EU.

“We are obligated to do so, as the latest opinion poll shows that 76% of the Montenegrin citizens would vote in favour of joining the EU at this moment. Therefore, following the completion of the NATO process, key efforts of the Montenegrin Government will be concentrated on our strategic priorities,” he underlined.

The Prime Minister reminded the EU countries’ ambassadors that Montenegro has opened 26 negotiating chapters, while temporarily closed two of them, hopeful that at least two more chapters will be opened at the governmental conference in June, and that there is chance for another one chapter to be closed.

“Montenegro is aware of the fact that the enlargement policy requires not only the support of Brussels and the member states, but that it also implies that the EU aspiring countries should do everything to fulfil the necessary criteria. Ënlargement policy has changed altogether, and now we can hear many dissonant messages about the future of Europe and the process of unification of the continent. We are living in challenging times and we all have to share this burden and show full commitment and seriousness,” said Prime Minister Duško Marković.

Commenting on the recently proposed initiatives in the region, the Prime Minister said that they need to be analysed in depth, and their consequences reviewed, in particular in terms of additional institutions, administration and costs.

“Montenegro, as a country that has moved away in its integration process, cannot accept the ideas whose implementation would imply stagnation or going back on the path to EU membership. We, therefore, expect the iniatives to be presented in a proper manner, prior to proposing new forms of economic cooperation, in order to be able to assess all the repercussions they might have for the Western Balkans, which is, as you know, at the different levels of integration. Montenegro has no alternatives to its EU membership. In that context, all our efforts and work within the framework of the negotiating structure are aimed at adapting to the EU market only. Given our level of integration, we have no other aim, but to complete the ongoing processes in the four fundamental freedoms guaranteed by the EU, and close the negotiations in the four chapters soon. For us, EU integration is the only and main objective. This is our citizens’ commitment as well, achieved through the referendum process, and also enshrined in the Constitution, as one of the main goals of our foreign policy. It carries more weight as we are a candidate country that is uncompromisingly aligning with all the EU priorities regardless of the consequences, and certainly we are not trying to abuse the partnership developed over the years for the sake of daily political trade between East and West,” PM Marković underlined.

Prime Minister Duško Marković thanked the European Commission for its financial support to Montenegro, especially in terms of infrastructure projects, emphasising it is a key issue for stimulating economic growth.

“I am certain that we will make use of these funds quickly, thus creating more jobs and providing better quality of life for citizens,” Prime Minister Marković concluded.

Macedonian MFA: Greece should not be worried, irredentism is not characteristic for Macedonia

Montenegro accession to NATO: It is McConnell’s move