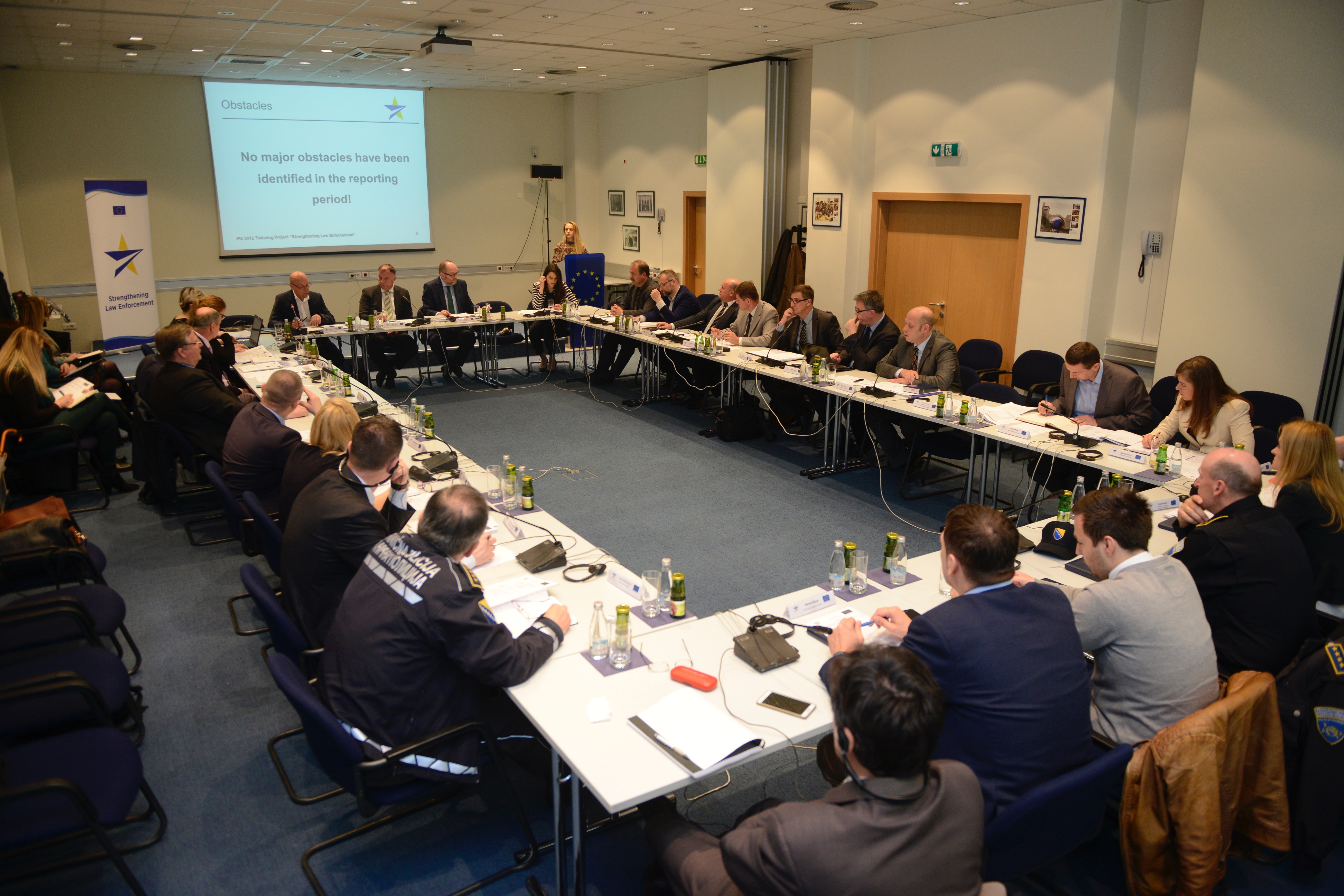 SARAJEVO – The project goals planned for the period December 2016 – April 2017 have been successfully achieved, was unanimously concluded at the third Steering Committee of the EU-funded project “Strengthening Law Enforcement“ held on 6 April 2017 in Sarajevo.

The Project aims at advancing police service and strengthening cooperation, coordination and efficiency in the fight against organized crime, terrorism and corruption relying on the expertise of the Ministries of Interior of Austria, Slovenia and Croatia as implementing partners. “I wish to commend the serious commitment and efforts of all state and entity level law enforcement institutions, as the direct Project beneficiaries, in shaping and using the Project activities to ensure maximum benefit for the police service in BiH in general,” notes Project’s Resident Twinning Advisor Friedrich Hofbauer.

Chloe Berger, Head of Section for Justice and Home Affairs and Public Administration Reform at the EU Delegation to BiH, stressed that “this twinning project demonstrates that the rule of law remains a key priority of IPA assistance. The success of the project relies in its inclusive approach, with all levels in BiH actively participating.”

This message was also conveyed to the Austrian Minister of Interior Mag. Wolfgang Sobotka, who met with the Project representatives on the margins of the conference entitled “Shaping our common future” on the challenges posed by and future steps in the fight against extremism and terrorism co-hosted by the Republic of Austria and Bosnia and Herzegovina in Sarajevo. Minister Sobotka extended his full support to the Project implementation, reiterating the readiness of the Federal Ministry of Interior to make the required expertise available in making it a success.

As for the benchmarks for the project, the Steering Committee, in particular, took note of the development in regards to the systemic solution for psychological support to police officers. In order to have this issue legally regulated, as the first step towards the establishment of this programme, the Project has prepared a draft article to be introduced in the relevant legislation on police officials, as well as a draft Manual on psychological support to police officials which is to be adopted at the individual police institution level. “This activity has been fully endorsed by the police institutions management as a highly important question for police officials in BiH. The Ministry of Security will from its end incorporate this article into draft state-level law on police officials before we send it to the parliamentary procedure,” underlines Samir Rizvo, Assistant Minister of Security of BiH in his capacity of Beneficiary Country Project Leader.

In discussion on priorities for the upcoming three months, the Steering Committee agreed that these will, among other, include further training for the fight against new forms of crime, cyber in particular, as well as the continuation of the strengthening of police and prosecutorial capacities in the fight against crime.a

The project “Strengthening Law Enforcement” is implemented in BiH with the aim to further advance police service and strengthen cooperation, coordination and efficiency in the fight against organized crime, terrorism and corruption. This project is led by the Austrian Federal Ministry of Interior and the Agency for European Integration and Economic Development (AEI) in cooperation with the Ministries of Interior of Croatia and Slovenia and funded by the European Union in amount of EUR 4.5 million from the Instrument for Pre-accession Assistance (IPA 2012).

Macedonian MFA: Greece should not be worried, irredentism is not characteristic for Macedonia

Mogherini: Serbia has key role in region under pressure