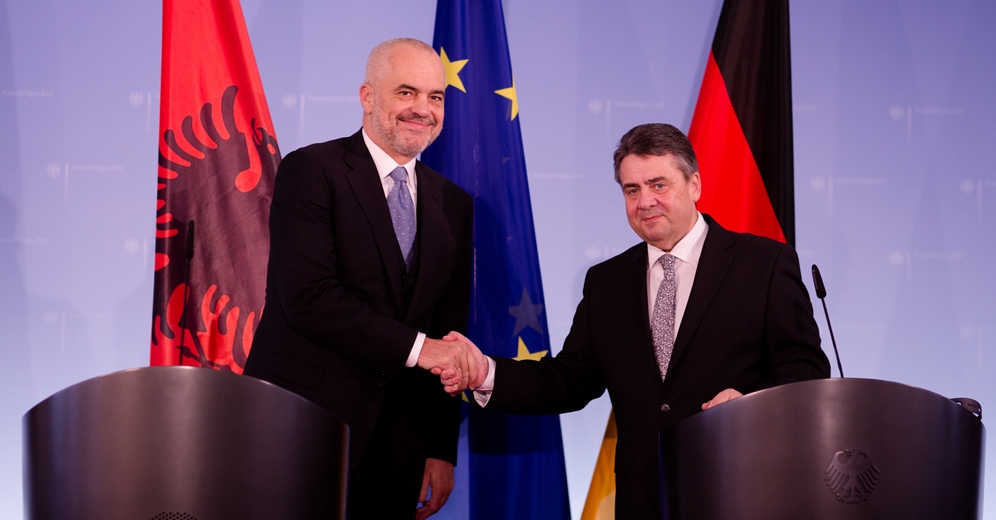 TIRANA – Federal Minister for Foreign Affairs of Germany, Sigmar Gabriel said the judicial reform must be implemented and there is no alternative besides this, during a joint press conference held with the Albanian Prime Minister, Edi Rama, on Monday.

“We increasingly encourage governments in the region and Albania as well to continue their path towards EU integration and not to halt already initiated reforms. Sometimes it’s difficult because sometimes there is no alternative to some reforms, such as the justice reform or the fight against corruption and organized crime to which here is no alternative,” said Gabriel.

Referring to elections, Gabriel stated “the readiness to deploy more international observers, to discuss on electoral campaign financing but it should be done within the Parliament not in a tent. We urgently advise the end of boycott. If elections are boycotted and the country enters in chaos there will be no support on our behalf and whoever boycotts the Parliament removes Albania far from EU integration.”

Prime Minister Edi Rama praised the particular support provided to Albania by Germany towards EU integration, highlighting the German aid in certain transforming reforms, such as the judicial reform, strengthening public administration, infrastructure, electrical power, vocational education and so on.

Rama said that he introduced the German Minister to the steps Albanian governmen
t has undertaken especially in enforcing the vetting process in order to free the judiciary of the corrupt judges and prosecutors and to convey a message to European partners that Albania’s is ready to open accession negotiations to EU.

The Premier stated that among others the meeting focused on the current situation in the region, the Berlin process and on the upcoming Trieste Summit to be fruitful to Albania and its European aspirations.