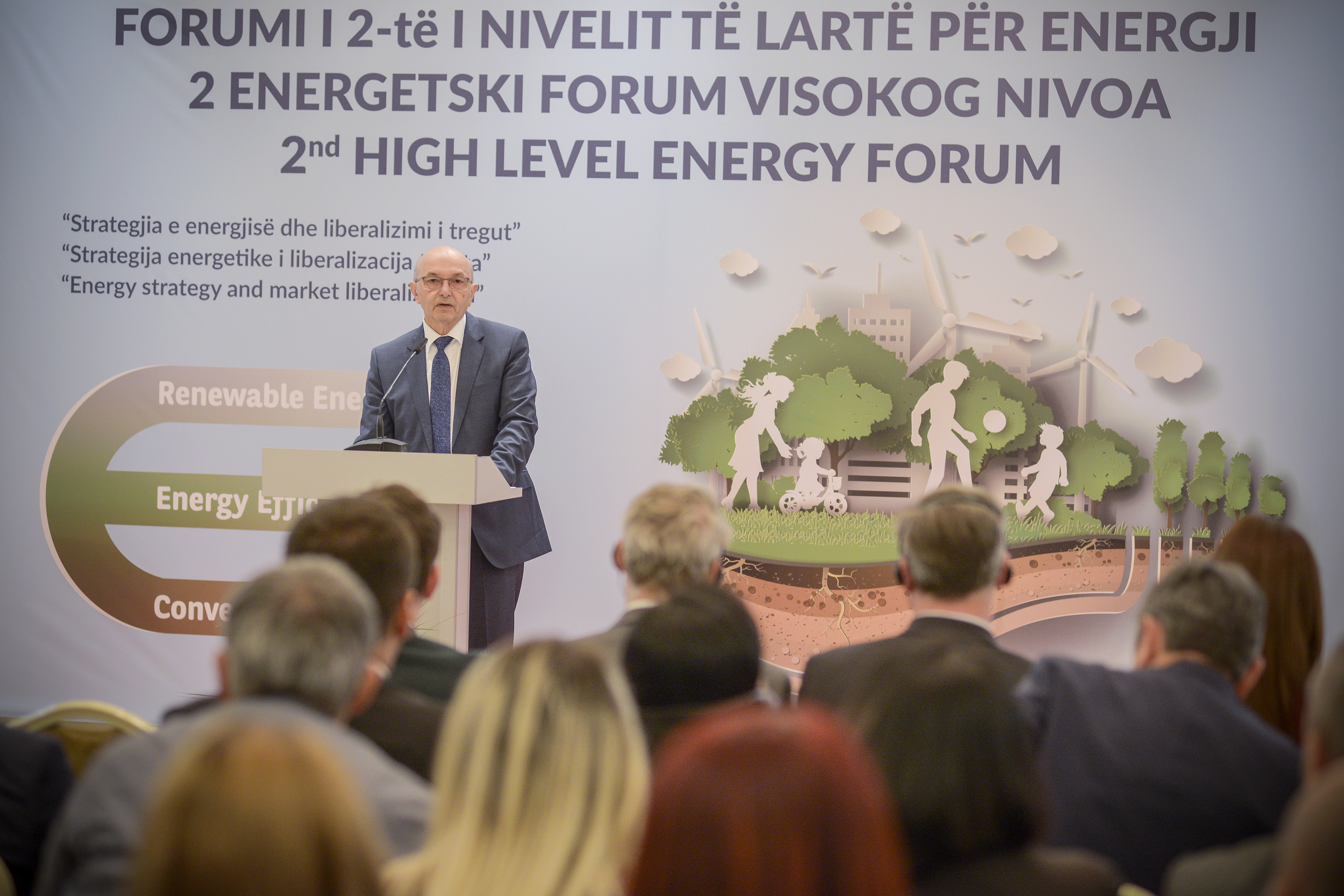 Isa Mustafa speaking at the conference; Photo: Government of Kosovo

PRISTINA – The Prime Minister of the Republic of Kosovo, Isa Mustafa, attended the Second High Level Forum on energy “Energy Strategy and Market Liberalization”. This forum was also attended by the American Ambassador, Greg Delawie, head of World Bank office in Kosovo, Marco Mantovanelli, representative of the European Union office in Kosovo, Luigi Brusa, Minister Blerand Stavileci, and other institutional representatives from Kosovo and Albania, the Government of Kosovo stated.
Prime Minister Mustafa expressed his gratitude for the continuous support and assistance that the Government of Kosovo and institutions have received from international partners, which support has contributed to the recovery of the economy and focus on the key sectors of development, such as the energy sector.

“We have adopted the Energy Strategy for the period 2017-2026 and consider this as a special achievement, because energy remains one of the basic priorities and not just as a relevant resource for economic development and social development of Kosovo in this period, but also in the coming years. We also consider that the adoption of this strategy was equally important as it is our shared commitment to its implementation and this will be a special priority of the Government. It is also a coordination priority, in order for us to achieve the targets that we want to achieve with our strategy in this area”, said the Prime Minister Mustafa.

Further, Prime Minister Mustafa stressed the need that Kosovo has for the development of energy resources, as well as the start to construct the power plant “Kosova e Re”, as the first priority of the Government.

“I do consider that, successful completion of the construction of this power plant, will directly affect the creation of long-term conditions for economic development and economic recovery, will provide conditions, which will ensure that foreign and domestic investors can invest in Kosovo without having the electricity as a problem, and will also guarantee the citizens and our businesses here, that they will have regular supply of electricity”, said Prime Minister Mustafa.

As Prime Minister said, economic development is a special priority to Kosovo, a propulsive development based on internal resources and in partnership with foreign strategic investors, especially the private sector and in the field of energy.

Prime Minister Mustafa also said that efforts will be made in using the alternative sources, in order to have renewable energy and ensure the energy efficiency, full respect of environmental conditions, about which special conditions must be provided.
“However, to ensure these strategic objectives, Kosovo needs to have strategic partners for investment, needs to have commercial expertise for these investments, in order to transfer then our budget to the other needs, education, health needs, infrastructure needs and the need to encourage private sector development”, said Prime Minister Mustafa.
Further, the Prime Minister said that the government has shown that it can demonstrate a clear development vision through the National Development Strategy and through the daily economic policies, which have created macroeconomic and budgetary stability and the opportunity for long-term trends of economic development.

“This is the best indicator that we can achieve results we aim for, that Kosovo is a stable country and state, a state which can develop affordable investment, a friendly country for investment and a country which can ensure all investors to come and show themselves here”, said Prime Minister Mustafa.

Prime Minister Mustafa has addressed special thanks for the cooperation to the United States and Ambassador Delawie, World Bank representatives, the European Union, the German partners for their support in the field of energy, expressing the interest that this cooperation will continue in the future in strategy implementation.
“I also thank the Ministry of Economic Development and Minister for the work done so far and the close contacts he has held with our partners, but also the vision expressed in this field and expressed the full support of the Government of the Republic of Kosovo to the Ministry and minister in this area and also ask for your continued support to work together in achieving the objectives in the field of energy and the liberalization of this market”, said Prime Minister Isa Mustafa.

Minister of Economic Development, Blerand Stavileci, said that all that is done in the framework of a strategic vision for the future of the sector is involved in five basic objectives, which are worth about 3 billion Euros, investments that are expected to be implemented in the future in the energy sector.

Further, Minister Stavileci emphasized that a very positive news on energy sector in recent years is also the approval of the third energy package laws, which opens the path for the market and pricing liberalization, as well as creates the possibility of a competitive electricity market, which is not only Kosovo’s goal, but of all regional countries.

The head of the World Bank Office in Kosovo, Marco Mantovanelli, stressed the importance of the Energy Strategy, as a good space for donors to support the Government of Kosovo in its implementation. For him, it is important to have regional energy market integration.
“We believe that the integration of the regional market is a key to ensuring a stable electricity supply and reduce generation price and energy itself”, he said.

The representative of the European Union Office in Kosovo, Luigi Brusa, said that this is the beginning of an important and mandatory reform to meet EU standards.
“Energy is the core of the European Reform Agenda, which prioritizes key reforms to be undertaken in the implementation of the SAA”, he said.

Faruk Serdareviç, representative of the USAID “REPOWER” support project, for energy sector in Kosovo, presented an overview of the developments, achievements and future challenges in the energy sector.

Kocijančič: Confirming engagement of both sides is important

Hashim Thaçi: With his decision, Ivanov buried democracy, ignored will of people