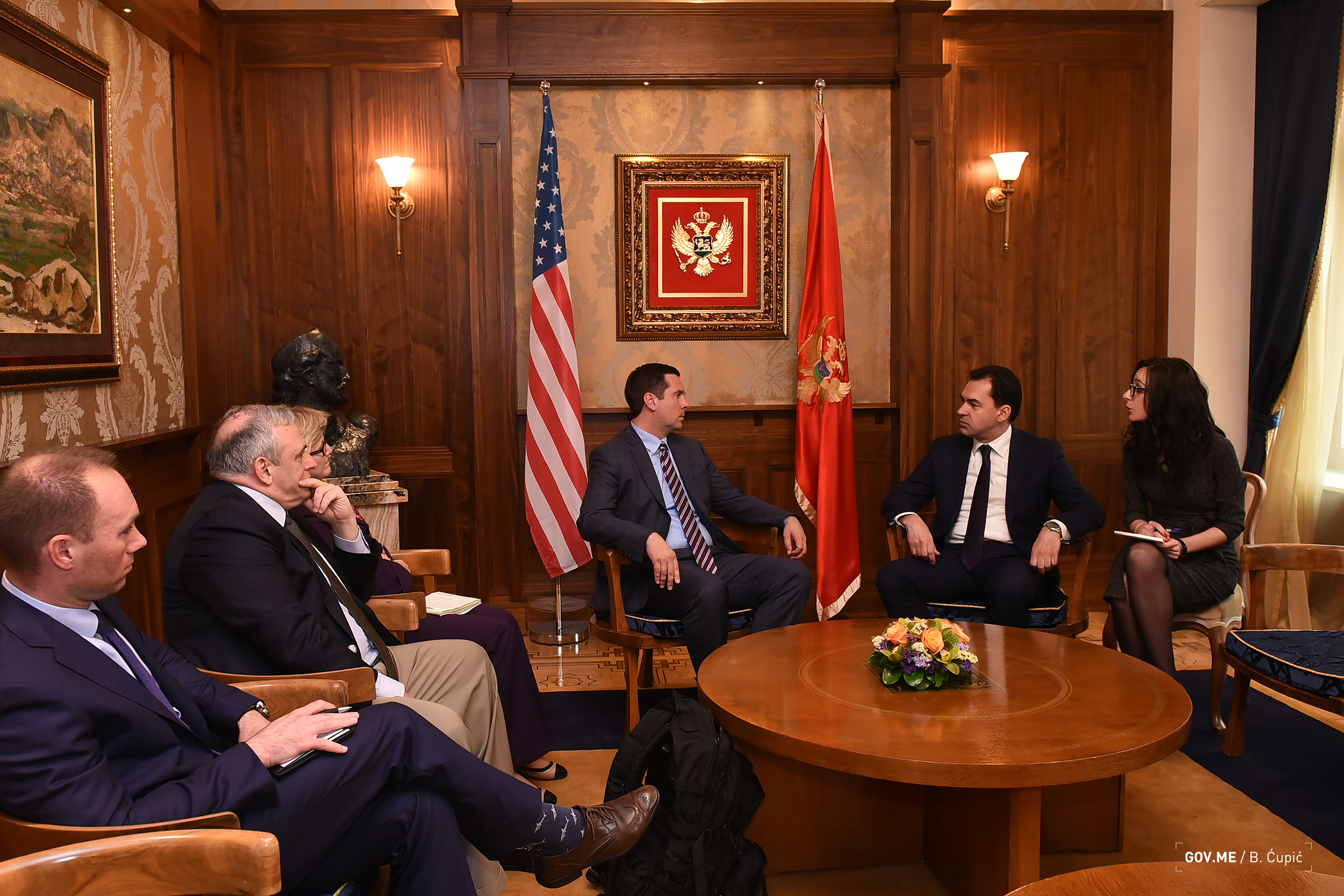 Meeting of Zoran Pazin with US delegation; Photo: Government of Montenegro

PODGORICA – Montenegrin Deputy Prime Minister Zoran Pažin hosted Wednesday a delegation of the US Congress, headed by Chairman of the House of Representatives’ Intelligence Committee Devin Nunes, it was stated by the Government of Montenegro.

DPM Pažin pointed out that Montenegro and the United States have developed a partnership based on democratic values and mutual trust and cooperation. This visit, as well as the recent visit by Senator McCain, testifies to strong US support for Montenegro’s foreign policy priorities – membership in NATO and the EU.

Universal principles of democracy, peace and cooperation are the prospects for the region and also an opportunity for economic development and prosperity of citizens, said DPM Pažin.

He thanked Congressman Nunes for the US support and contribution to Montenegro’s efforts towards achieving these goals, hopeful that the USA will continue to support Montenegro. Ratification of the Protocol on the Accession of Montenegro to NATO is a confirmation of support and friendly relations between the two countries, but also a recognition of the hard work of state institutions and civil society in Montenegro in order to meet all requirements of NATO membership, which s not only a military alliance, but also a community of democratic values. Montenegro is willing to make its full contribution to the preservation and enhancement of these values.

The two officials discussed the current political developments in Montenegro and stressed the need for all political stakeholders in Montenegro, who share the values of a democratic system, to participate in the dialogue in the Parliament, as the most important democratic forum in the country.

DPM Pažin and Congressman Nunes concluded that the principles of independence and impartiality of the judiciary should be respected in the proceedings conducted against persons who are alleged to have participated in the preparation of terrorist attacks on the day of parliamentary elections on 16 October 2017. Deputy Prime Minister Pažin said that the judicial proceedings in this case will be open to public.

Congressman Nunes also met with Minister of Foreign Affairs Srđan Darmanović and Minister of Defence Predrag Bošković. US Congressman praised Montenegro’s progress on its Euro-Atlantic path and expressed full support for its upcoming membership in NATO. Ministers Darmanović and Bošković said that Montenegro remains committed to reforms and as a new NATO member it will continue to constructively contribute to the common system of values and to regional stability.