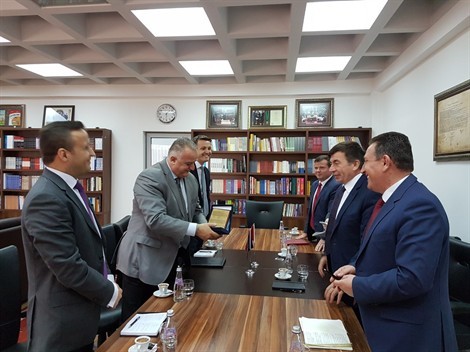 Meeting of the two ministers; Photo: Government of Montenegro

PRISTINA – Montenegrin Minister for Human and Minority Rights Mehmed Zenka paid working visit to Kosovo Friday, where he met with Kosovar Minister of Education, Science and Technology Arsim Bajrami, Ministry stated.
Minister Zenka spoke with Minister Bajrami about issues related to the Albanian community in Montenegro, with special emphasis on education in Albanian language in Montenegro.

Minister Zenka said that Montenegro, as a democratic country, pays much attention to respecting and protecting human and minority rights, and it pays special attention to the ethnic minorities. He thanked Minister Bajrami on readiness to help strengthening education in Albanian language in Montenegro.

Cooperation between Montenegro and the Republic of Kosovo in the field of education is very good, Zenka said, adding that a large number of young people from the Albanian community in Montenegro showed interest to study in Kosovo.

Minister Bajrami said that the Republic of Kosovo provides support to the Albanian community in Montenegro in the field of education, through books, the quota for students, but also through the opportunity to assist in the training of secondary education teachers, as well as in other areas. Montenegrin delegation, led by Minister Zenka visited the University of Prishtina and discussed with the Rector of the University Marjan Demaj on strengthening further cooperation.

Minister Zenka, Director General of Directorate for Promotion and Protection of Rights of Minorities and Other National Minority Communities Leon Gjokaj and Director General for Education of Minorities and Other Ethnic Communities Marash Dukaj also spoke with members of the Association of Montenegrins of Kosovo. They concluded that it was important to work together on the promotion and preservation of the identity of the Montenegrin minority in Kosovo and its full integration into society. It was proposed the signing of a Memorandum of Understanding with the National Council of Albanians in Montenegro, as well as intensification of activities related to the increasing involvement of members of Montenegrin community at all levels of institutions in Kosovo.