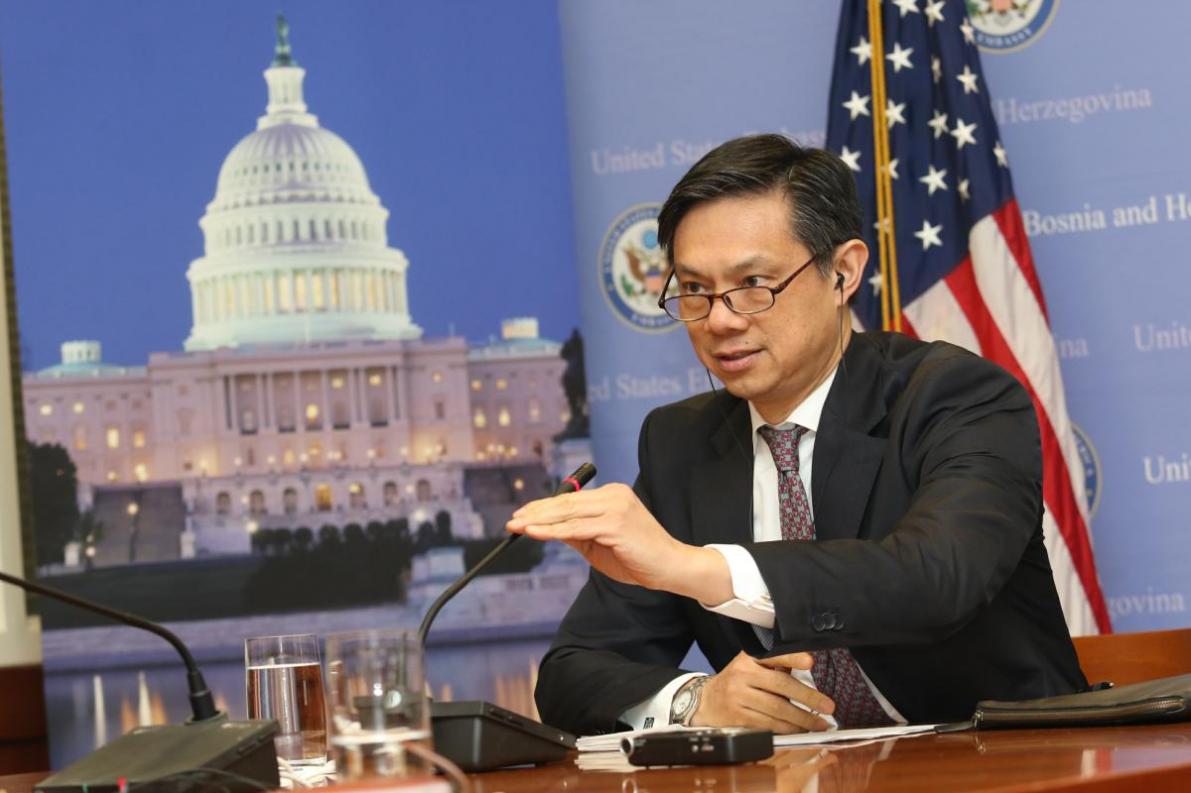 SKOPJE – The Deputy Assistant Secretary for European and Eurasian Affairs, Hoyt Brian Yee said Monday in his statement after two days of meetings in Skopje that a new Parliament Speaker has been elected, and condemned the violence in Parliament. For him, there is no dilemma about a parliamentary majority having the responsibility to form a new government, but at the same time, he said that all dilemmas need to be discussed by political leaders in Parliament, Meta reports.

Hoyt Brian Yee said that he is under the impression that all political leaders are aware of the seriousness of the situation and should take responsibility to calm the situation and resettle the debate back in the home of legislation.

“We are especially concerned about violent and cowardly attacks after the parliamentary majority elected the new Parliament Speaker. It is extremely important that the political leaders find a way to end the crisis in the country. It is important for leaders to find a way to let the parliamentary majority propose a government and government program”, said Yee.

In his statement for the media after meetings with political leaders in Macedonia, Hoyt Yee said that he had constructive conversations, passed on the interest of the US for stability in the Western Balkans and and he supports the legitimate demands of the citizens for a stable and prosperous future of the country.

Ali Ahmeti, DUI party leader, said at a press conference after meeting with Hoyt Brian Yee that the support from the US and the EU for the new Parliament Speaker, Talat Xhaferi, who was elected in a legitimate way, means that Trajko Veljanoski is no longer the chairman of Parliament.

“After everything that happened at Parliament, it is about time everyone becomes aware that the country is headed in a negative direction and they have to accept the new reality, the Speaker of Parliament”, said Ahmeti, saying further that the election of Talat Xhaferi was conducted legitimately.

Ahmeti stressed that DUI is determined to continue with the process of constituting the new government.

Regarding the withdrawal from office which was announced by the Minister of Interior, Agim Nuhiu, due to his moral responsibility after the way he felt after the violent protests at the Parliament, Ahmeti said that the Minister had full support from the DUI party and other parties, however, it makes no sense to withdraw now, at a time when there is no authority that could accept his resignation.

A support was given for the democratic processes in the Republic of Macedonia which after the credible elections have continued with the election of a new president of the Parliament from the ranks of the parliamentary majority, and will result in the election of a new government in Macedonia, said SDSM in its announcement after Monday’s meeting between the SDSM’s president Zoran Zaev, the deputy president Radmila Shekjerinska and the general secretary, Oliver Spasovski, with the Hoyt Brian Yee and the US Ambassador in Macedonia, Jess Baily.

“The new president of the Parliament was elected legally and legitimately, in accordance with the Rulebook, the laws, and the Constitution. We are continuing to move the processes forward, wisely and with dedication, and in the forthcoming period, we shall start the process of forming the new reformatory government” Zaev has said, announced SDSM’s press release.

The party president announced in front of the US diplomats “that Gjorge Ivanov shall receive a notification from the new parliamentary president that there is a democratically formed parliamentary majority and shall request from the president of the state to act in accordance with the constitutional obligation to assign the mandate for forming the government.”

Zaev has announced that the future government is ready to cooperate with the future opposition in the interest of the reformatory processes “but at the moment it is most important that VMRO – DPMNE accept that it is an opposition party now and to stop the tensions”.

On the other hand, representatives from VMRO-DPMNE told Yee that they don’t support physical violence, but at the same time they condemn the political violence that was done by SDSM on the institutions, the Rules and Regulations, the laws and the Constitution.

At the meeting at the MPs Clubouse, the president of VMRO-DPMNE, Nikola Gruevski was present as well as Nikola Poposki, Nikola Todorov, Trajko Veljanoski, Vladimir Gjorcev, and Aleksandar Nikoloski.

Representatives from VMRO-DPMNE have said that for them the political violence on the Constitution, the laws and the Rules and Regulations on part of SDSM was the reason for the people’s rage, and additional provocation came from the intonation of the Albanian anthem in Parliament.

After meeting with Yee, Macedonian President Ivanov stated that the obstacles that are preventing him from assigning the mandate are surmountable only if there is a real determination on part of the party leaders. At the same time, Ivanov has requested an assistance on part of the USA in order to help the parliamentary majority to help gain the mandate. Still, he stressed that the platform of the Albanian parties is unsurmountable.

“President Ivanov stressed that if there is a real leadership among the presidents of the parliamentary parties, the legal and the political obstacle for assigning a mandate for forming a government can be surmountable. The Macedonian president had asked the US, as Republic of Macedonia’s strategic partners, to help in removing the obstacles and to allow the parliamentary majority to get the mandate” said the press release issued by the president’s cabinet.

Also, Ivanov had condemned “every political and physical violence in the Republic of Macedonia and stressed that the solutions should be found only through a dialogue.”

“The precedents with which a practice is introduced and the illegal is becoming legal is undermining basic democratic principles,” said Ivanov.

During the meeting with Hoyt Yee, he said that he demands that SDSM’s party leader to fulfill the publicly given word that “ he will come together with the coalition partners and will provide guarantees for strengthening the state’s unitarity and that everything will be in accordance with the Constitution of the Republic of Macedonia.

“The Tirana Platform cannot be a predicament nor a basis for forming a government in the Republic of Macedonia stated the Macedonian president,” said the press release issued by the president’s cabinet.

Hahn: If the violence occurs again, it will endanger Macedonia’s path to the EU