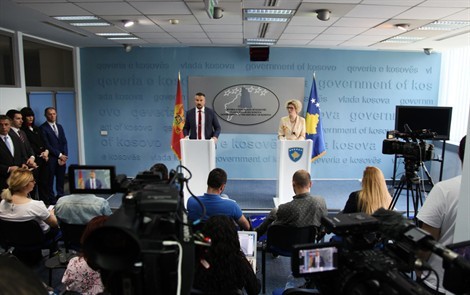 PRISTINA – Montenegrin Minister of European Affairs Aleksandar Andrija Pejović met earlier Wednesday with Minister of European Integration of Kosovo Mimoza Ahmetaj. The officials pointed out that the lessons learned from the negotiation process and Montenegro’s support in the EU accession process are very important for Kosovar future path towards EU, Montenegrin Ministry of European Affairs stated.
Minister Pejović informed Minister Ahmetaj about the current situation in the negotiation process, emphasising that during five years of EU negotiation process Montenegro has made a significant adjustment of its legal and institutional system to the European legislation, and that the application of new solutions has already begun to produce results in practice. Minister Pejović said that Montenegro will share its knowledge and experience with colleagues from Kosovar institutions, as it did with other countries in the region.

The two officials also exchanged views on the existing mechanisms of bilateral and regional cooperation and discussed the possibilities of improving contacts on the European path, both at political and technical level.

Both sides expressed satisfaction with the utilisation of funds within IPA 2011-2013. It was estimated that the contracted projects contributed to improving the water resource management, sustainable economic development and stimulating employment, sustainability of the tourism model based on the natural and cultural values, improving biodiversity, strengthening cooperation and joint initiatives aimed at young people and tourism, as well as entrepreneurship in the tourism industry.

Ministers Pejović and Ahmetaj stressed the determination of the two countries to make the best of 9.7 million EUR from IPA 2014-2020, adding that Montenegro and Kosovo will strive to contribute to promoting employment, environmental protection, as well as to encourage tourism and cultural and natural heritage through joint activities.