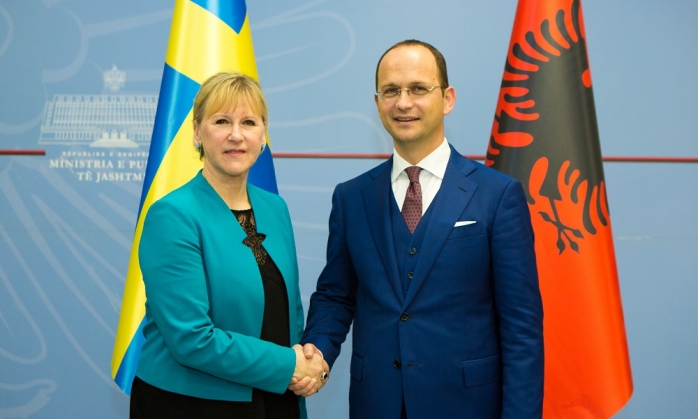 The ministers made an analysis of the growing cooperation dynamics in all domains prioritising economic, education and youth employment cooperation in several sectors. They praised the ongoing contribution of Sweden to Albania via research projects and assistance provided in different sectors.

The two ministers particularly focused on Albania’s EU integration and agreed on the transforming impact enlargement policy has to Western Balkans countries. In his part minister Bushati praised the supporting role of Sweden and its continues contribution to the transforming reforms process in Albania as well as reaffirmed the engagement of the Albanian government to implementing the judicial reform.

“We believe that the future of Albania lies within EU, therefore the Second Conference on Western Balkans Integration will be held in Stockholm on 29 May, 2017,” added minister Wallström.

The ministers discussed the current political situation and developments in the region. Minister Wallström praised the role of Albania as a stabilizing and cooperative factor in the region as well as underlined the Swedish support to the region’s enlargement policy.

Minister Bushati introduced the Swedish counterpart to the cooperation history between the two countries through an exhibition in the premises of the Ministry of Foreign Affairs.

Negotiations between Rama and Basha without agreement

Rama: There is Albanian ethnicity in Macedonia