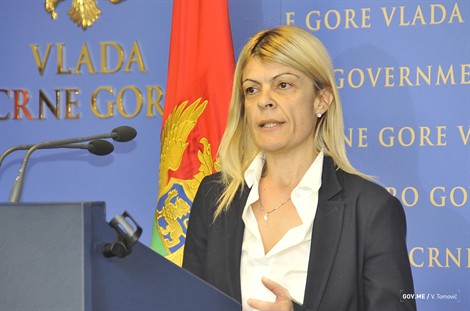 PODGORICA – The Government of Montenegro decided to officially support the initiative for establishment of the International Institute for Sustainable Technologies in the Balkans with the mission of “Science for Peace.” Minister of Science Sanja Darmanović said that such a project, which is unique in the region, would significantly impact on economic development, improvement of living standards, reducing unemployment and would represent a certain type of ‘industrialisation’ of our region on the basis of sustainable technologies, Government of Montenegro stated.

The project would have two main objectives. The first objective is to promote cooperation between science, technology and industry. In addition, it would be a platform to educate talented young people and engineers on the basis of knowledge and technology transfer from European centres such as CERN and others. The second important objective is to bring together people from different countries in the region, not only scientist but also engineers and administration. A project like this would represent another successful example of CERN’s model.

SESAME project, implemented in Jordan, shows the success of this initiative. The project brings together nine Middle East countries with different political systems and religions, including both Israel and Iran. The founder of the SESAME project, Professor Herwig Schopper (the former Director-General of CERN), was the main initiator of establishing the International Institute on the territory of Southeast Europe, with the support of the UN, UNESCO and CERN. This Initiative was first presented to the board of the World Academy of Arts and Sciences (WAAS) in Dubrovnik in 2016.

“The Government of Montenegro is the first in the region to officially support this initiative and is open for collaboration regardless of where the location of the Institute will be. It also expresses its readiness for that Montenegro could be a candidate to host the platform, taking into account our geographical position, nearness of the five countries in the region, but also multi-ethnic and multi-religious harmony and tolerance that has always been present among us,” Minister Damjanović said at today’s press conference.

Establishment of a large, new institute, based on new technologies that would allow so-called “first class research” is the only way to achieve the primary mission of “Science for Peace.” Specific preliminary scientific concept of this new institute already exists, in the form of two very different options, both based on the construction of synchrotron (a type of circular accelerator).

The first option is ‘Synchrotron Light Source’ with a new technique that was first used in Sweden. This project would enable research in various fields such as biology, chemistry, pharmacology, ecology, geology and engineering, with wide application in various industries and over 1.000 researchers to work in this institute.

The second option is Hadronic Cancer Treatment and Research in Bio-medicine. This institute could be built on the model of CNAO-Pavia. If 50 percent of the time is devoted to the research, about 500 patients per year would be treated at the institute and about 1.000 researchers would work in it, a large number of which would be from the countries outside the Balkans.

“Since it is well known that our region needs economic aid, it seems possible to obtain financial support  for this project from the European Union, through the Berlin process and other EU funds. With significant support of Herwig Schopper and provided that the other Balkan countries support this initiative, we believe and expect that there is a high chance that the idea of a Balkan project will be carried into effect,” Minister Damjanović highlighted.

Inauguration of the mentioned SESAME Project will take place on 16 May 2017 in Jordan.