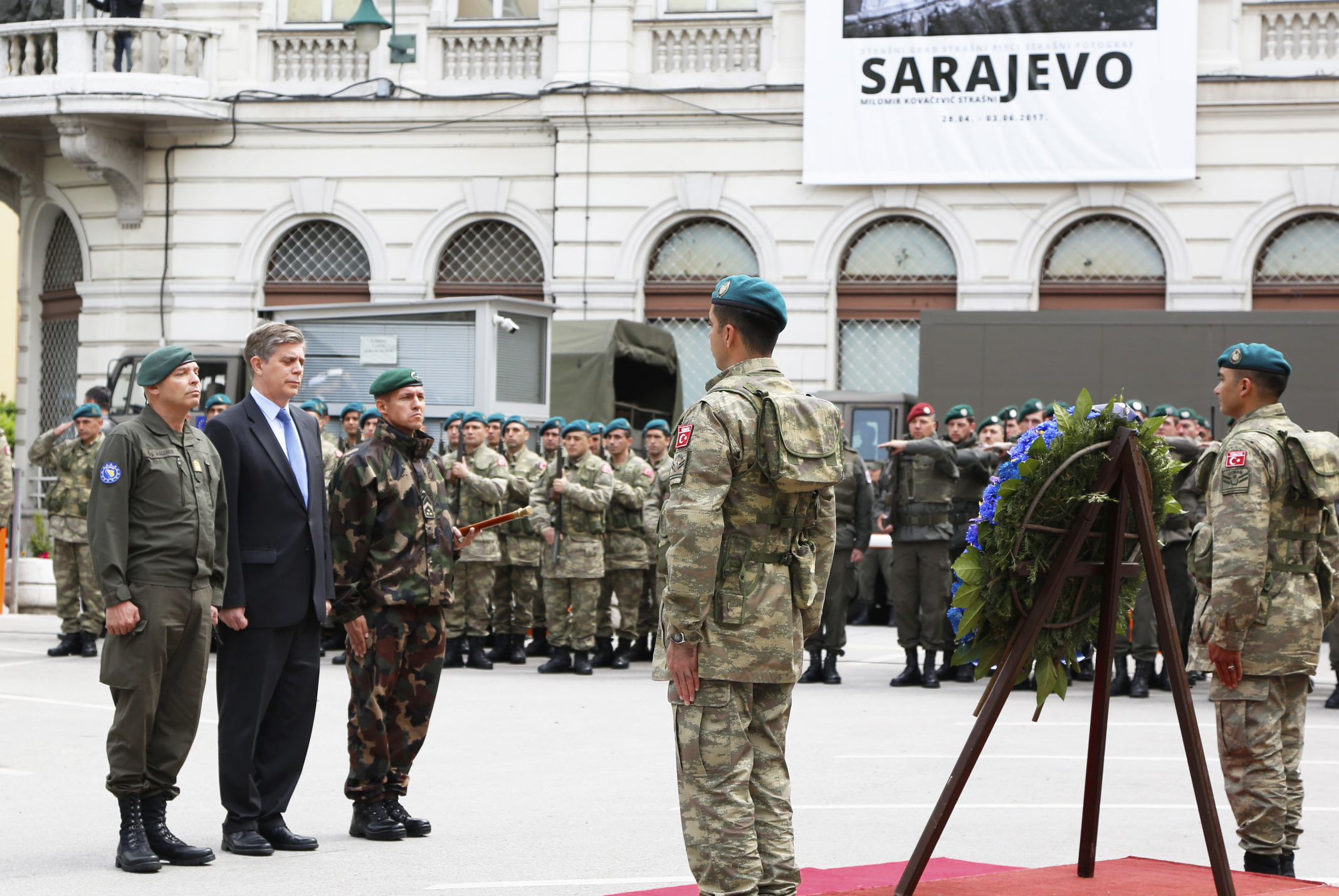 SARAJEVO – On 9th May 2017 EUFOR and the EU Special Representative in BiH, in cooperation with the Armed Forces of BiH, conducted a ceremony at the Army Hall in Sarajevo to celebrate EU Day.  COMEUFOR Major General Anton Waldner and EUSR Ambassador Lars-Gunnar Wigemark presided over the parade which consisted of troops from EUFOR, the Armed Forces BiH and the AFBiH Band. The theme of the event was “Sustainable Stability”, EUFOR stated.

The event highlights the close cooperation between the EU and BiH, especially between EUFOR, its Troop Contributing Nations and the AFBiH.   It shows the mutual support and respect that exists between them in working together for peace, security, stability and a more prosperous future. The event was attended by Mr.  Sifet Podžić, Joint Committee on Defence and Security of BiH; Mr. Boško Šiljegović, Parliamentary Military Commissioner of BiH;  H.E. Dr. Valentin Inzko, the High Representative in BiH; Major General Senad Mašović, Deputy Chief of the Joint Staff Resources;  delegates from BiH and the EU and representatives from other nations.

The ceremony outside Army Hall in Sarajevo consisted of a fly-past by helicopters and aircraft from EUFOR and the AFBiH, the laying of an EU Wreath and speeches by the EUSR and COMEUFOR.  It was followed by a VIP Reception in the Army Hall.

COMEUFOR said “Today’s ceremony was conducted, not only to mark Europe Day but also to commemorate our fallen soldiers who lost their lives in the pursuit of peace here in Bosnia and Herzegovina.  By its presence, EUFOR helps in the achievement of a Sustainable Stability in this country and we remain committed to the Capacity Building and Training of the Armed Forces of Bosnia and Herzegovina.”

The EUSR stated: “The EU institutions are here to support and assist, but the main effort and the call for reforms has to come from within. Everybody has a stake and responsibility in this process of moving towards the EU, including the citizens who hold their leaders accountable.” He further commented: “There is now solid ground to continue the reforms and the positive dynamics. A lot has been achieved, and the onward movement of BiH, focusing on real concrete improvements to citizens’ lives, towards EU membership needs to be maintained.” He also said that good governance and progress in the Rule of Law would require peace and stability, which were the reason for EUFOR’s presence and reminded the audience that the European Union was fundamentally a peace project.

Europe Day is an annual event and for EUFOR this was only the second time that an EUSR and EUFOR-led, AFBiH supported, event has occurred in Sarajevo to mark the occasion. Whilst the event took place on Europe Day it is only one of many events that will be conducted in BiH, by the EUSR, during the month of May.

Vučić: Call to Kosovo Albanians for continiation of dialogue