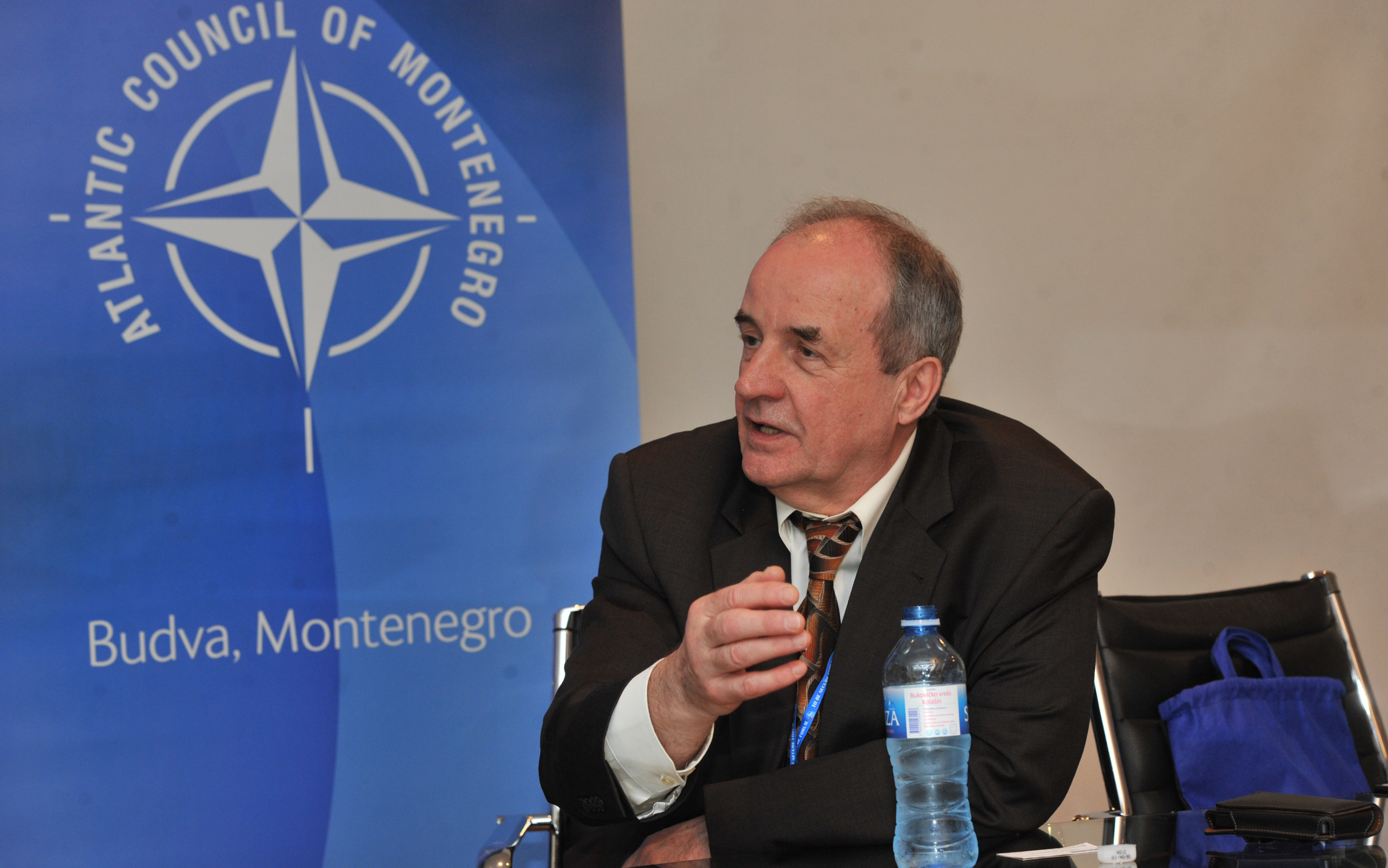 Interview with Janusz Bugajski, a Senior Fellow at the Centre for European Policy Analysis (CEPA) in Washington DC and host of the “New Bugajski Hour” television shows. The interview was conducted during the 2BS Forum in Budva, Montenegro, where Bugajski was one of the speakers.

European Western Balkans: Montenegro is seen as a game changer, as it was said during this morning’s panel. What are the consequences of Montenegro’s membership in NATO for the country and for the region?

Janusz Bugajski: After eight years of hiatus, finally NATO has brought in a new member. Remember, there was no new member since the Bucharest Summit in 2008. This is actually an opportunity for NATO to regain momentum in terms of its mission. And remember, its mission is to bring in all European countries that fulfil the requirements for common defence, that are democracies, that have settled borders, that have conducted military reforms, that have civil-military relations accorded to NATO stipulations, and many other requirements, and Montenegro has met those.

It is an important moment for Montenegro to demonstrate its progress as a Western state, not long after regaining independence. That itself is a momentum for NATO in the Western Balkans because Montenegro can serve now as an example for other countries, that you too can join if you do the hard work, fulfil the conditions and meet the requirements.

EWB: Do you think that the accession of Montenegro to NATO will change the view of NATO in the eyes of Serbian citizens?

JB: Quite possibly, if Montenegro becomes more successful and attracts more investments. The NATO membership itself is another stepping stone towards EU membership – I think all those things serve as a potential example to Serbian citizens. I personally do not buy this idea that Serbia wants to be neutral, because remember, Yugoslavia under Tito was non-aligned, was neutral. But sooner or later, you have to choose. You are not Switzerland – you are not a rich country with a specific niche. Serbia is a country which will be surrounded by NATO countries and it will fall behind in its military reform, in its modernisation programmes, if it does not become a part of NATO.

I cannot imagine any Serbian officer wanting to be more closely aligned with the Russian military – a lot of it is obsolete, and the funding now is really going to go down, you are going to see real problems in Russia – rather than to be a part of the most modern military organisation in the world. It does not make sense to me. You want to be part of the best, not second best. It is obviously a political decision in Serbia and it will take longer. In other countries in the region, I think, it will have a quicker process, and Serbia is going to be a challenge.

EWB: You just said that NATO membership is a kind of a stepping stone in EU accession process, so do you think it is possible to become an EU member state, especially for the countries of the Western Balkans, without accession to NATO?

JB: Yes, it is possible, and it depends on the EU. Serbia could be an example of entering the EU before entering NATO. Then the question for Serbia will, of course, be Kosovo. Kosovo wants to be a member of both. And if Kosovo builds its military, I think they are going to invest a lot of resources in trying to become a NATO member, as soon as they are allowed to. That is going to create a problem in a way for Serbia because Serbia may even have Kosovo in NATO, and it will be outside the Alliance.

To answer your question, yes – I think it is possible to enter the EU before entering NATO. There are countries such as Sweden and Finland, they are in the EU and are not NATO members. There are also NATO members that are not EU members, such as Norway. But in this particular region, I think it needs to be united collective defence system and a collective EU integration system.

EWB: How do you see the Russian influence in the Balkans and what are the consequences of Russian meddling in the interior matters of all the countries of the Western Balkans?

JB: I would say – look at the bigger picture. I think it goes beyond meddling. I keep hearing the Russians are “meddling”. I think it is more than meddling. The Russians are using this region to undermine, eventually to dismantle the West, to prevent further NATO enlargement, to prevent further EU enlargement, to create rifts within European – NATO countries on how to deal with these questions here, possibly at some point they may want to restart a war – maybe in Bosnia, maybe in Macedonia, maybe over between Kosovo and Serbia – in order to distract NATO attention, in order to inject themselves as mediators. It is like the guy with the matches – sets fire to a house and then comes in as the fireman. In the Russian tradition is to start conflicts and then inject itself as a mediator, which enhances its role in the region.

For all these reasons and the fact that the region is being neglected by the EU, it is not yet integrated into NATO, it gives more opportunity for Russia to pursue its strategy vis-à-vis the West. I call it “Europe’s soft underbelly”, in other words, where they can really punch and create problems for the Alliance and for the West.

EWB: As you are based in the US, do you expect some major changes in Trump’s administration towards the Western Balkans, and approach towards international relations, especially in this region?

JB: Trump has assembled a very good national security team which surprised a lot of people. Because initially, if you listen to what he said during the campaign, it sounded more like an isolationist America first approach. By the way, “America first” has two meanings: either America alone or America in the lead. Hopefully, it is America in the lead, that the new team is going to pursue. We see that now with the recommitment to NATO, and in a way I would say Trump has refocused attention on NATO by telling NATO they have to spend 2% GDP. I think it is very good thing what he has told all NATO countries. So now, several have committed themselves to increasing their GDP spending on defence and I think others will too.

Secondly, during his meeting with Secretary general Stoltenberg, he actually mentioned Montenegro coming into NATO. I think that is huge for this country – the fact that one of the first countries that Trump mentioned in an official briefing was little Montenegro. I think that he has assembled a very good team, not only on the NATO question but also on the Russia question – they understand Russia. The new National Security Advisor – McMaster, the Secretary of Defence – Mattis, Nikki Haley – the Ambassador to United Nations, these are all people with a very realistic view of Russia, they know what Russia is up to, and they will fight for the interests of allies internationally. I think it is good.

Trump himself is learning on the job. He has never closely followed international relations. He is a more of a business salesman than he is an international leader, which he now is. And that is a very difficult position to adjust to and he is still learning how to do it.

EWB: Taking into account all that you have said during the interview, what do you think, which approach should EU take towards the Western Balkans, right now, taking into the account the NATO membership of Montenegro, the situation in the Macedonia, also in Albania and Kosovo?

JB: I think EU should look at what has happened. NATO has bitten the bullet and said – We are marching on. The EU should do similar, it should focus attention on bringing in this region quickly as possible into the EU. Secondly, given the fact that there are instabilities in this region and the negative outside influences, particularly from Russia, it really should focus the mind of the EU in devising some new timetable – the whole Thessaloniki process is eroded and we need some new impetus, some new incentive. To start some new process with a timetable, strict conditions and specific rewards. Otherwise, people are not going believe they are ever going to be members of the EU. The longer people think that the club does not want them, then less they would want to be a part of the club. It is in human nature to reject what rejects you.

JB: I wrote an article on the CEPA website on all the problems confronting the Western Balkans a month ago. I think I listed nine different areas of problems. The last two are foreign influences and the first seven are domestic problems. In other words, corruption, political polarisation, criminality, loss of faith in institutions by the public, insufficient economic growth. About seven different factors I listed, plus the idea that the EU has not really opened the doors. I mean, the door is open, but you really cannot walk through.

EWB: Do you think that those interior problems will be tackled in the near future? Do you think that the political elites in our countries are willing to do so or they are just neglecting that and using foreign influences as an excuse for not doing so?

JB: Some are, some are not. I would not generalise about all the political elites. Some political elites are very responsible and know what they want – their countries to be the part of the EU and to meet all the standards of the EU, including the rule of law. Others, I think, hide behind the delays of the process of integration, “they do not want us so why should we reform”, they continue to operate behind the scenes.

I think one of the most important things I would say in all of these countries is the separation of powers and in particular removal of politics from business. If you can accomplish those two things as far as possibly can, then you are much closer to meeting the EU standards. And remember, not every EU country is perfect. We have corruption, scandals and nepotism in EU countries. But the fact is that we have the legal system that investigates this, and when people get caught, they get punished. That is the difference.

Tusk: We are not naive, support for Western Balkans