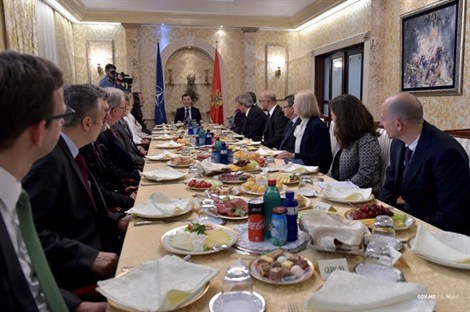 Minister Bošković at the working breakfast; Photo: Government of Montenegro

PODGORICA – “Your help was crucial in achieving one of our most important foreign policy priorities, whereby we achieved the vision of modern Montenegro, which shares the same values with the most developed countries in the world. Montenegro’s membership in NATO, as one of the most important moments in our recent history, is a joint success of all, not only Montenegro,” Minister of Defence Predrag Bošković said at Monday’s working breakfast, held in “Villa Gorica”, addressing the diplomatic representatives of NATO member-states accredited in Montenegro, Government of Montenegro stated.

Minister Bošković thanked diplomats for the continued support they have provided to Montenegro over the last decade in the implementation of comprehensive political, economic and security reforms in the process of Euro-Atlantic integration, noting that their constructive suggestions, advice and assistance were of great importance.

He expressed his belief that Montenegro’s membership in NATO is a positive signal for the entire region of the Western Balkans, adding that the integration into the Euro-Atlantic and European structures is of crucial importance for the stabilisation and economic development of the region. “I believe we can all agree that the Western Balkans can not be stable without a clear Euro-Atlantic and European visions, just as Europe can not be safe without the full integration of the region.”

Minister Bošković said that Montenegro is ready to contribute to the efforts of NATO allies in the fight against modern security challenges, as well as in activities aimed at discouraging negative external influences. He added that the Army of Montenegro will continue to contribute to the design of stability and strengthening of collective defence through its participation in international missions and operations under the auspices of NATO, the UN and the EU.

The Minister pointed out that as a new NATO member, Montenegro will continue the successful cooperation with the allies, as part of the family of states whose relations are based on trust and friendship.

Diplomatic representatives of NATO member-states welcomed the accession of Montenegro to NATO, expressing the conviction that the Alliance will therefore get a credible and a trusted ally.

Given that Montenegro passed a very demanding and intensive security sector reforms, but also other parts of the Montenegrin society, they agreed that the country demonstrated commitment to achieving the highest standards of modern democracy, and that Montenegro’s membership in NATO is a confirmation of these results. As a 29th NATO member, Montenegro will have the support of allies for further development and improvement of its institutions through the collective security system to ensure the safety and security of its citizens.

The working breakfast was organised on the occasion of the completion of the ratification process of the Protocol on Montenegro’s Accession to NATO, after less than a year since the signing of document, and to meet marking the eleventh anniversary of Montenegro’s independence on 21 May, as well as the maintenance of NATO mini-Summit on 25 May, where Montenegro will participate for the first time as a full member.