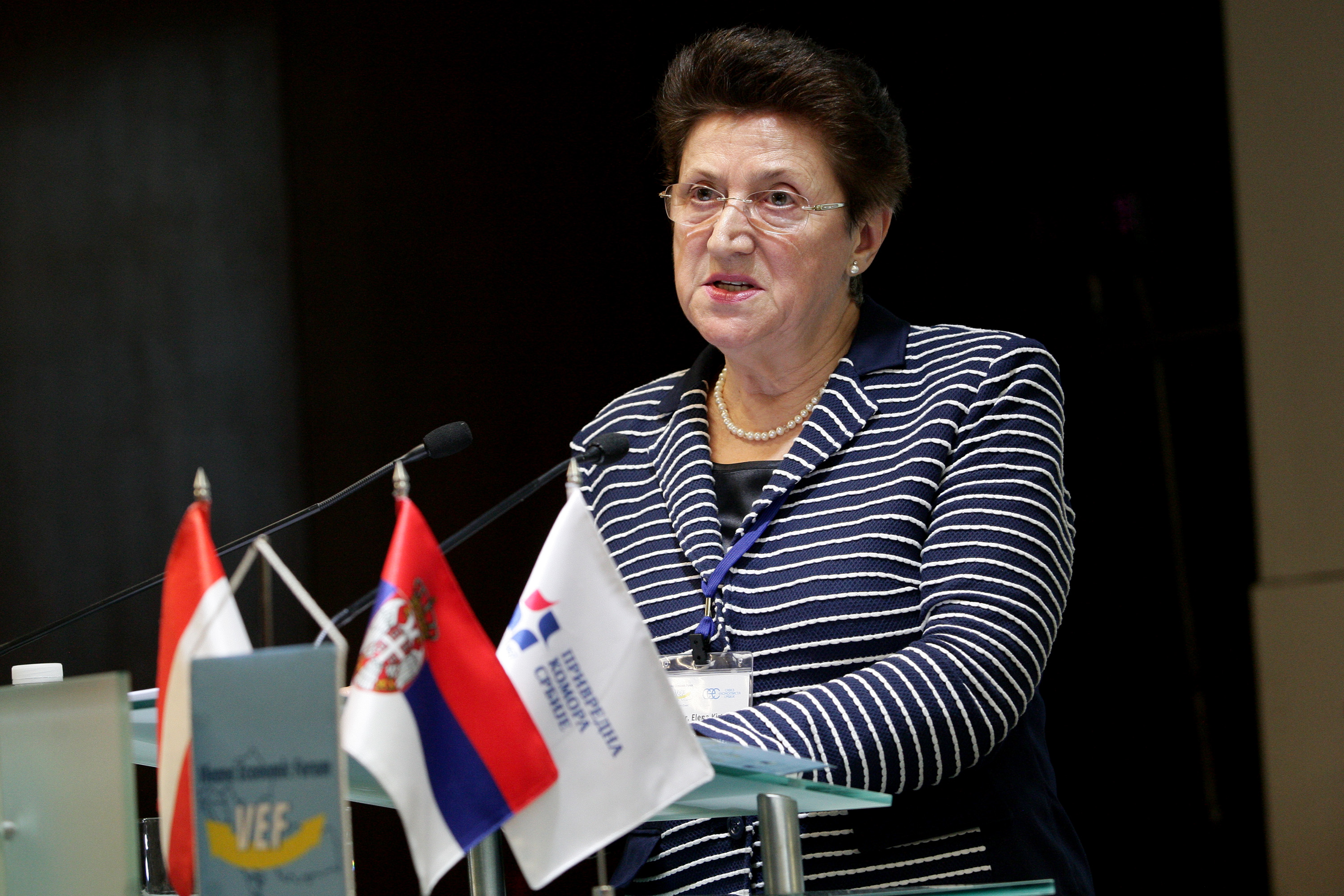 Vienna Economic Talks Belgrade Meeting will be organized on May 21-22 under patronage of Jean-Claude Juncker, President of the European Commission. On this occasion we spoke to Ambassador Dr Elena Kirtcheva, Member of the Board and Secretary General of Vienna Economic Forum.

European Western Balkans: Why is it important for this year’s Vienna Economic Talks to be held in Belgrade? What is the role of Serbia in the region in terms of EU integration process and economic cooperation?

Elena Kirtcheva: Allow me, on behalf of the whole Board of Vienna Economic Forum (VEF) to ensure you, that we feel privileged to be here in Belgrade today, together with many Members of the Board of Vienna Economic Forum from different countries of Europe and the world, to discuss actively with more than 200 registered participants from 22 countries the Responsibility to be Regionally Connected. That is, to speak about the need to boost the Regional Cooperation on a European Path, and to examine the Regional Investment Chances and particularly the chances to participate in the good economic development of Serbia.

The very fact that Vienna Economic Talks- Belgrade Meeting 2017 is under the Patronage of Jean-Claude Junker, President of the European Commission, points out the role of Serbia in terms of EU integration process and economic cooperation for the whole region. I am very thankful to the European Union Delegation in Belgrade for the great support on arranging our meeting today.

I am also very proud that we organize Vienna Economic Talks- Belgrade Meeting 2017 together with the Serbian Association of Economists and with the big support of the Serbian Chamber of Commerce.

Today’s participants in Vienna Economic Talks – Belgrade Meeting 2017 are personalities who represent a broad spectrum of business and public life corporations, institutions and organisations in Europe and worldwide, and who hold the responsibility for our shared and better future in the whole region.

EWB: Your greeting words will be heard at the event’s session titled “Regional Cooperation on a European Path”. How much is the regional cooperation important for the European integration process of the Western Balkan countries?

EK: Regional cooperation is an important precondition for the European integration process. In my opinion, the effective support of the regional economy and politics of the whole Balkans region as a full mosaic and not only of the Western Balkans as a sub-region is one of the major challenges both for us -from the region- and for Europe and the European Union!

Today we are coming together at a more-than-ever turbulent time for the region, for Europe and for the world. A time in which values are being challenged, centrifugal movements are gaining ground, and where credibility is threatened everywhere.

I am convinced that, especially at this time, we need more solidarity, cooperation and collaboration in the whole region, more joint discussions and encounters between economy and politics, and more looking ahead.

It is a special goal of Vienna Economic Forum  to emphasize the importance of regional economic cooperation, which could mean consolidation of the whole region for the common European path, and to insist on the big responsibility regional leaders have in demand.

Vienna Economic Forum strives for the European present and the European future of the region. The regional economic collaboration is viewed by VEF as an eminent part of the stability and as a basis for prosperity for the whole region and for the whole United Europe, which we need!

Great examples for this are also our cooperation partners and supporters, who are active in the region, in particular CANON CEE GmbH, Sopharma PLC, Parivodic Advokati/Lawyers and Oesterreichische Post AG, for instance.

EWB: What do you consider as the key regional economic projects and why are they so important?

EK: The construction of a joint transportation and energy infrastructure in the Balkans has, without a doubt, high priority, and is also in the focus of the interests of the EU and the “Juncker Plan”.

It is the only option for the region to be integrated within the extensive European infrastructure, so that the access form the common European borders will be extended and eased.

This is where the logistic and financial support of the EU and of the European Fund for Strategic Investments (EFSI), which was founded for that reason in particular, comes as relevant.

Just look at the region as a whole: the construction, the completion and the renovation of energy and transportation networks in the region and the connections within is an obvious need!

For the aforementioned reasons, the construction and modernisation of the infrastructure is crucial. The construction of transportation and energy networks is the driving force for the development of every region and contributes to the creation of jobs and economic growth.

Historically speaking, the time for a more intense development of this European region has come! I am pleased, as I am from the region myself, about the proclaimed stronger interest of the EU in the states of Western Balkans, which should lead to a continuously developing process.

To accelerate the process, I see a very import role in the neighbouring countries, which are already EU-members such as Slovenia, Croatia, Bulgaria and Romania.

Serbia has made good progress toward its strategic goals of EU-membership and can play a very successful role as the region’s leading force.

EWB: On the agenda of the Berlin Process, regional connectivity is among priorities. How do you see development in this area? Is it possible to develop faster? What are the key elements for doing so?

EK: We need to develop faster. And we can. For this reason, I see the role, and at the same time the responsibility of the regional leaders as highly important.

I would like to quote Prime Minister and elected President of Serbia Aleksandar Vucic’s speech at the Vienna Economic Forum-Tirana Meeting 2015: “Let us, like Germany and France back in the days, not look back at the past, but towards the future”.

I am convinced that the leaders of all the countries and territories of our region should be aware of this challenge: looking ahead!

EWB: What are the key obstacles for further economic development in the region? Is it the rule of law, lack of financial resources or maybe something else?

EK: When I today advocate for an intensified role of regional economy and regional politics in the Balkans and its European present and future, and talk about the big challenges for the region and for Europe, I am doing so through the prism of my Vienna Economic Forum- experience. My experience in the economic development in the region reinforces the belief that the regional economic collaboration and the further economic development is an eminent part of stability and prosperity possibilities in the region, and should be strengthened and viewed with priority.

The rule of law and financial resources are important elements for a good economic development, but what we especially need is trust! Trust is an important factor for economy – it is the basis for long-term credibility, for the development of small and big projects, and for the implementation of regional infrastructure projects, which are so necessary for the Balkan region. The bottom line is – trust is important for the economic stability of the whole region.

I am aware that nowadays, the search for political solutions for the different regions in crisis in Europe and the world, is not only dominated by the mind-set and the language of politicians, but also often determined by the agenda of different governments and societies.

But in my opinion the economic collaboration, which relies on mutual interest and requires mutual trust, is the right way forward to a consolidated economic Balkans. We need to have the capability to accept this and the determination to enforce it. It will give us the confidence to know that we are on the right path!

The main goal of Vienna Economic Forum is to be the platform for building trust, for the exchange of thoughts and for the tangible collaboration with state institutions and political circles! A platform where the worlds of economy and politics can merge. A platform where visionaries meet!

Allow me finally to inform you that the 14th Vienna Economic Forum – Vienna Future Dialogue 2017 under the Motto “Economy meets politics” will take place on the 6th of November 2017 at the Novomatic Forum in Vienna, to kindly ask your readers to “save the date”, and to invite them to participate.