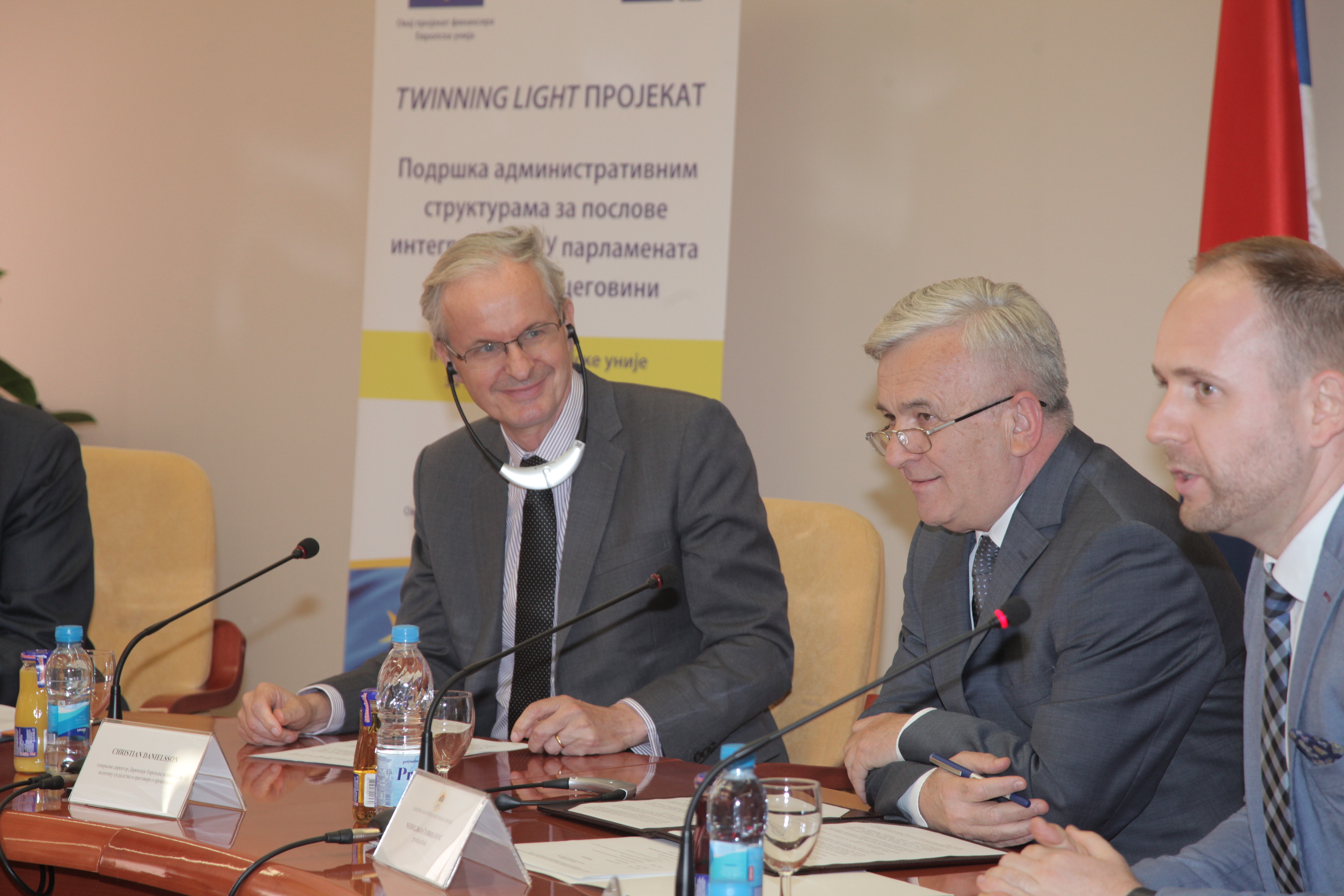 Danielsson at the event in Banja Luka; Photo: EU Delegation to BiH

BANJA LUKA – The EU-funded Twinning Light project that will  support the administrative structures of the parliaments in BiH in implementing their tasks related to EU integration was launched on 23 May  at the National Assembly of Republika Srpska in Banja Luka, EU delegation to BiH stated.

“This project is important because it upgrades and further fortifies the capacity of parliaments for mutual coordination with regards to all challenging issues that will appear during the harmonization of legislation process. The legislative bodies will play a very important role in the European process for Bosnia and Herzegovina”, said Director-General for European Neighbourhood Policy and Enlargement Negotiations Christian Danielsson. “In addition to their regular legislative role, the role of the parliaments assumes not only the supervising role over the executive authorities, but also the engagement in compromises as well as the inclusion strengthening which is of great importance in this whole process. The EU process should not be divisive, it should be inclusive and I’m sure that this Twinning project will contribute in building this capacity“.

The project that brings together parliaments in BiH from the state, entity level and the level of Brcko District, and their counterparts from Hungary, aims to help fulfil the parliamentary tasks related to EU integration as well as to strengthen the parliamentary cooperation in this regard.

“I hope we will finish this project by the end of this year, and that we have the opportunity to start a new one and continue achieving objectives on the EU path of Bosnia and Herzegovina and Republika Srpska“, said Nedeljko Čubrilović, Chairman of the RS National Assembly, and thanked the EU for the initiative and the continued support.

This project bridges the gap between two larger EU assistance packages to the BiH parliaments. Between 2014-2016, the twinning project “Enhancing the role of parliaments in Bosnia and Herzegovina in the EU integration context” with a budget of EUR 3.5 M financed from IPA 2012 offered a large scale support and achieved significant results.

Worth EUR 250 000, this project will run until  December 2017. In the beginning of 2018, the EU will launch another two-year larger twinning project of e-parliament software and hardware support to the BiH parliaments in the total value of EUR 4 M, which will be financed from IPA 2016.

Rama, Mogherini: Full support to go ahead with reform in justice system

Mogherini and Hahn: Violence in Parliament is unacceptable, we call for restraint