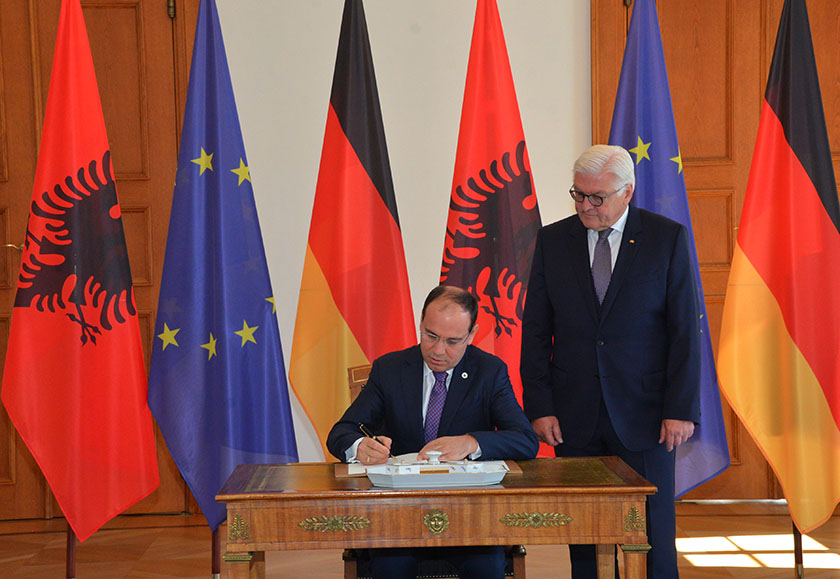 Nishani and Steinmeier; Photo: Office of President of Albania

TIRANA – President of Albania Bujar Nishani on the sidelines of the 22nd International Berlin Meeting was received on Friday by German President Frank-Walter Steinmeier with whom he had a conversation focused on strengthening of bilateral cooperation, European accession-related issues as well as the latest developments in the Western Balkan region, ATA reports.
According to sources from the President’s office, the Head of State appreciated the ongoing and significant support of Germany over the years, as well as expressed his confidence that relations of strategic partnership will further deepen. Nishani assured his German counterpart Steinmeier that Albania and Albanians will be always grateful and reliable partners of Germany.

“German assistance for a sustainable socio-economic development, membership in NATO and tangible support in the process of European integration have fostered the bond between the two countries. Today Albania is not only a consumer, but also an active contributor to security and peace, either at regional or world level,” Nishani pointed out.

The Head of State said that the process of European integration remains the best boost mechanism for the country and Albanians, it is the major process after membership into NATO.

Having briefed German president on the effort and attention devoted to implementation of reforms, Nishani cited the justice reform and the beginning of its enforcement, also highlighting the contribution of Germany and its experts to the draft of legislation in line with the best German and European standards.

For his part, Steinmeier hailed the political agreement on justice reform expressing confidence that it will be successfully executed and on the right time.

It is very important for German investors to find a suitable environment for investments, because apart from the assistance, Germany has the ambition to be a trading and investing partner in Albania and other countries of the region as well, according to German President.

The two presidents also dwelt on the latest developments in the region of the Western Balkans, threats from terrorism and violent extremism as well as identifying the involvement of influences from the third countries in this region whose aim is to change the European and Euro-Atlantic agenda of the regional countries.

President Nishani highlighted the determination of Albania to be a factor of stability and cooperation establishing good-neighborly relations with all countries in the region. He added that the region is facing challenges and ongoing contribution of Germany and international partners would be necessary.

Steinmeier praised the role and positive influence of Albania in the region, assuring that Germany is highly interested and is making investments to the benefit of stability and peace in the region of the Western Balkans.

The two presidents are to meet again on Saturday in the framework of the Brdo-Brijuni Process Leaders Summit, where President Steinmeier is the leaders’ guest of honor.

Dačić: Presence of UNMIK in Kosovo important for Serbia