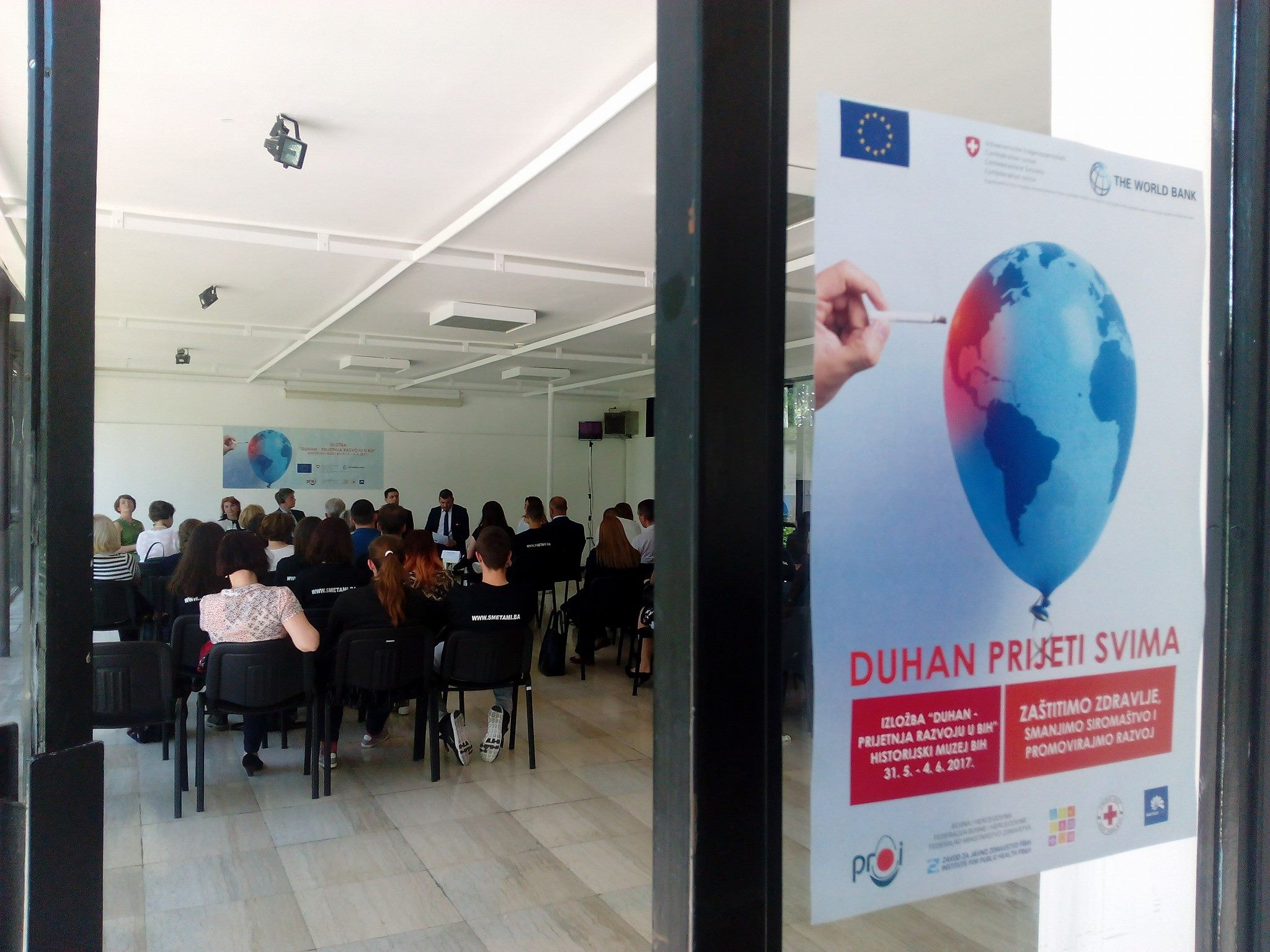 SARAJEVO – Tobacco and tobacco consumption annually take thousands of lives of the citizens of Bosnia and Herzegovina. Only in the Federation of Bosnia and Herzegovina, three-quarters of all deaths from diseases are linked to diseases for which tobacco and exposure to tobacco smoke is one of the major risk factors. Unfortunately, the consequences are not only health-related.

On the occasion of World No Tobacco Day, which is observed worldwide on 31 May, the Association PROI, in cooperation with the EU Delegation to BiH, the Swiss Embassy and the World Bank opened the Event Exhibition “Tobacco – a threat to development in BiH“ today at the Historical Museum of Bosnia and Herzegovina.” On this occasion, Head of the EU Delegation to BiH and EU Special Representative in BiH Ambassador Lars-Gunnar Wigemark, together with representatives of the FBiH Ministry of Health, the World Bank, governmental institutions of the Federation of BiH and the Association PROI addressed the attendees, and the event was attended by numerous other representatives of health institutions, international organisations, institutions and NGOs.

Ambassador Lars-Gunnar Wigemark, Head of the EU Delegation to BiH and EU Special Representative in BiH emphasised the need of addressing the issue of tobacco control and marking of this important date.

“Of course, we are not speaking about total ban of tobacco, we are speaking about control of use of this substance that is threat for health of all of us, which is a matter of public health, but also a batter of finance and development, not only in this country but in the complete region of the Western Balkans where smoking is still very popular,” Ambassador Wigemark noted and added that the new law that is currently in procedure in Federation of BiH presents the possibility of effective tobacco control and needs to be protected from the tobacco industry lobby.

This event is also supported through the project Reducing Health Risk Factors in Bosnia and Herzegovina, implemented by the World Bank with financial support from the Government of Switzerland.

The Association PROI has been working in the field of tobacco control for more than a few years, and in the context of its initiative, it launched the first public campaign in this area, the campaign “Smeta Mi”. This campaign was initiated within the “The Accomplishment of Human Rights and Fundamental Freedoms through Tobacco Control” project funded by the European Union in the amount of 157,600 euros through the European Instrument for Democracy and Human Rights.

“Tobacco and exposure to tobacco smoke not only cause devastating adverse health effects, but also economic, environmental and social consequences. We all need to be aware that, in addition to a direct threat to the health and lives of thousands of our citizens, tobacco truly represents a threat to the development of our country, encouraging poverty and endangering those most vulnerable – children and young people,” said Uliana Bakh, Executive Director of the Association PROI and particularly emphasized the need for all sectors and relevant institutions to join in addressing this problem and the fulfilment of obligations stipulated by the Framework Convention on Tobacco Control.

The draft of the new Law on Control and Limited Consumption of Tobacco, Tobacco Products and other Products for Smoking in the FBiH provides maximum compliance with the Framework Convention on Tobacco Control and the EU Directive on Tobacco. The draft of this law passed the adoption procedure in the FBiH Parliament House of Representatives, and the first phase following the remaining procedures is the House of Peoples of the Parliamentary Assembly of Bosnia and Herzegovina.

“Our international obligations, and above all, the data on the prevalence of smoking and the diseases associated with smoking in the Federation of Bosnia and Herzegovina, make the urgency of adopting a new and effective law on the control and limited consumption of tobacco an imperative. The Federal Ministry of Health will persist on this path, because it is one of the essential measures to protect and improve public health,” said Snježana Bodnaruk, Secretary of the FBiH Ministry of Health.

Recently, the interference of the tobacco industry was recorded through the lobbying by their representatives at sessions of the clubs of peoples just before the start of the 21st session of the House of Peoples of the Parliamentary Assembly of Bosnia and Herzegovina on whose agenda was also the new law on tobacco control. After the reaction of the Association PROI through appeals and letters of warning, and later by a number of international public health and non-governmental organizations, attention was drawn to the violation of Article 5.3 of the Framework of the Convention on Tobacco Control and the need to prevent similar events in the future.

“I consider the interference of the tobacco industry in the work of the clubs in the stages of passing decisions on the new law on the control of tobacco and tobacco products to be sly and unacceptable. Based on the experiences of countries that have adopted such a law, which was adopted in draft form in the House of Representatives, it is important to emphasize that only the adoption of the current text of the draft can have a full effect on the significant control of tobacco and tobacco products, the reduction of consumers’ rate and health prevention of harmful consequences of tobacco consumption and tobacco products,” said Oliver Radoš, Representative in the House of Representatives of the Parliamentary Assembly of Bosnia and Herzegovina.

During the panel discussion before the opening of exhibition, dr. Davor Pehar, director of Institute for Public Health of Federation BiH also addressed the audience.

“Introduction of this law will be test of society’s maturity. I strongly believe that our parliamentarians from both houses of Parliament of FBiH will recognize the European and global value of this law,” Pehar noted and added that smokers do not have the right to threaten the health of non-smokers and all others who are around them while they are consuming tobacco, emphasizing the proven noxiousness and health consequences of passive smoking.

During the exhibition, which will remain open until Sunday, June 4, visitors will have the opportunity to see six creative exhibits that will, in a unique way, present all harmful consequences of tobacco consumption and exposure to tobacco smoke. All exhibits are the work of a team of young volunteers who, during their production, used a variety of materials and approaches.

The joint letter commends the FBiH Ministry of Health for preparing this law, and the FBiH Parliament for the positive steps taken in support of this important regulation. The letter welcomes the fact that the new law will be discussed at the upcoming session of the House of Peoples of the FBiH Parliament.

The situation regarding tobacco consumption in Bosnia and Herzegovina is worrying: the high prevalence of tobacco use is one of the key factors contributing to the rise of non-communicable diseases in the country. In the Federation of BiH alone, data shows that 8,400 persons die annually from diseases attributed to tobacco smoking. Furthermore, the current legal situation in the Federation of BiH falls short of full implementation of the Framework Convention on Tobacco Control and is not harmonised with the EU legislation in this area.

The joint letter concludes that the adoption and enforcement of the Law on Tobacco Control in the Federation of BiH will have equally positive effects as similar legislation has globally, with substantial positive impact on the population’s health as well as on the economy.

NATO Secretary General: Our cooperation with FYROM is excellent

Migrant readmission should not be discussed