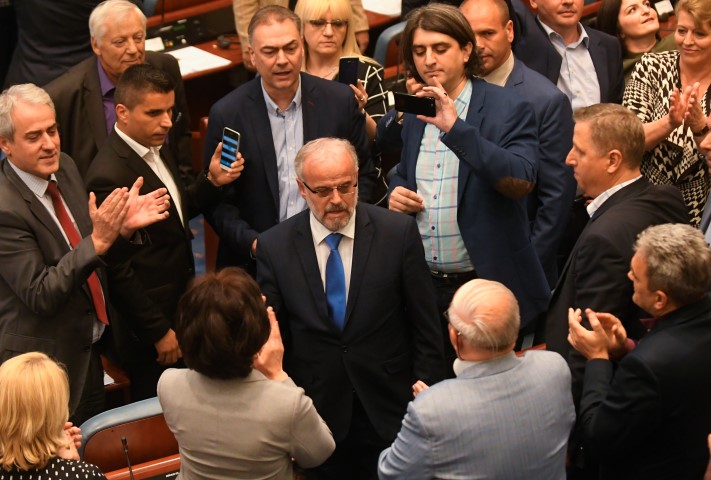 Macedonia has formed a new Government led by Zoran Zaev after months of political crisis. This seems to mark the end of instability in the country, which was occurring since the end of the last Parliamentary elections held on 11 December. Even though matters of transfer of power are concluded, matters of violence against the SDSM members and potential interference of the foreign intelligence agencies remain to be resolved.

The parliamentary majority, led by SDSM, was attacked during the constitutive session on 27 April in the Assembly of the Republic of Macedonia. Violence erupted after DUI’s MP Talat Dzaferi was elected as the new president of the Parliament. The protestors close to VMRO-DPMNE that were congregating outside have breached the police cordon and entered the Parliament building. Once inside, they attacked a part of the SDSM’s MPs and among the injured was SDSM’s party leader and later the Prime minister of Macedonia, Zoran Zaev.

Violence was universally condemned by regional politicians and European union officials, who called for the defusal of the situation and the peaceful transition of power. International scandal broke out when Macedonian television station Telma reported that, during the evening of physical clashes in the Assembly, Goran Živaljević, former deputy director of the Serbian BIA, Security Information Agency, and now its active liaison officer in the Embassy in Skopje, has entered the building with a crowd of people. He was headed to the plenary hall where the MPs of VMRO-DPMNE were located. Motives for his presence in Macedonian Parliament at the time of violence remain dubious, and he was quoted as saying that he was there on line of duty, to check whether the incident involved Serbian citizens, football hooligans or extremists.

Serbian Ambassador Dušanka Divjak-Tomić was summoned on 26 May to the Macedonian Ministry of Foreign Affairs regarding the presence of Živaljević in the Parliament building during the violent events. Reports stated that this institution expressed “dissatisfaction and concern about the unauthorized presence of Serbian diplomats in the Assembly during the violent events and has requested a detailed explanation of the reasons and circumstances for this event”.

The same day, Serbian Foreign Minister Ivica Dačić stated that Živaljević but did not violate diplomatic protocol or the Vienna Convention and that he was just doing his job. He added that this BIA official was staying in Macedonia legally and was doing his job by reporting on the situation.

Even though Macedonian MFA stated that they will retain constructive approach, their new Foreign Minister Nikola Dimitrov stated that the presence of the Serbian intelligence officer during the riots is an example of interference of Serbia in the internal affairs of Macedonia, and has added that it is “not good to start new relations with Serbia with scandals”.

Tensions were reignited shortly after this, when an investigative reporting platform OCCRP, Serbian investigative journalist organization KRIK and Macedonian TV Nova reported that Živaljević has brokered a meeting between the leader of the VMRO-DPMNE and Serbian journalist and MP Miroslav Lazanski through Ivan Stoilković, MP in the Macedonian Parliament and President of the Democratic Party of Serbs. According to the intercepts and information leaked from the investigation of the Macedonian secret police, their goal was to conduct a propaganda campaign in favor of former Prime Minister Nikola Gruevski and Russian interests in the region. Lazanski has denied these allegations, concluding that he was practicing journalism during his visit to Skopje, using diplomatic contacts to secure an interview with Gruevski. Leaks from this investigation have additionally strained Serbian-Macedonian relations and galvanized the public in both states.

These affairs (or diplomatic scandals, to be precise) have once again actualized the issue of rivalry and cooperation between the security and intelligence agencies of the states in the Western Balkans. Intelligence community in the region were previously perceived as improving, due to constant communication on the subjects of anti-terrorism and organized crime prevention.

Dačić: Presence of UNMIK in Kosovo important for Serbia