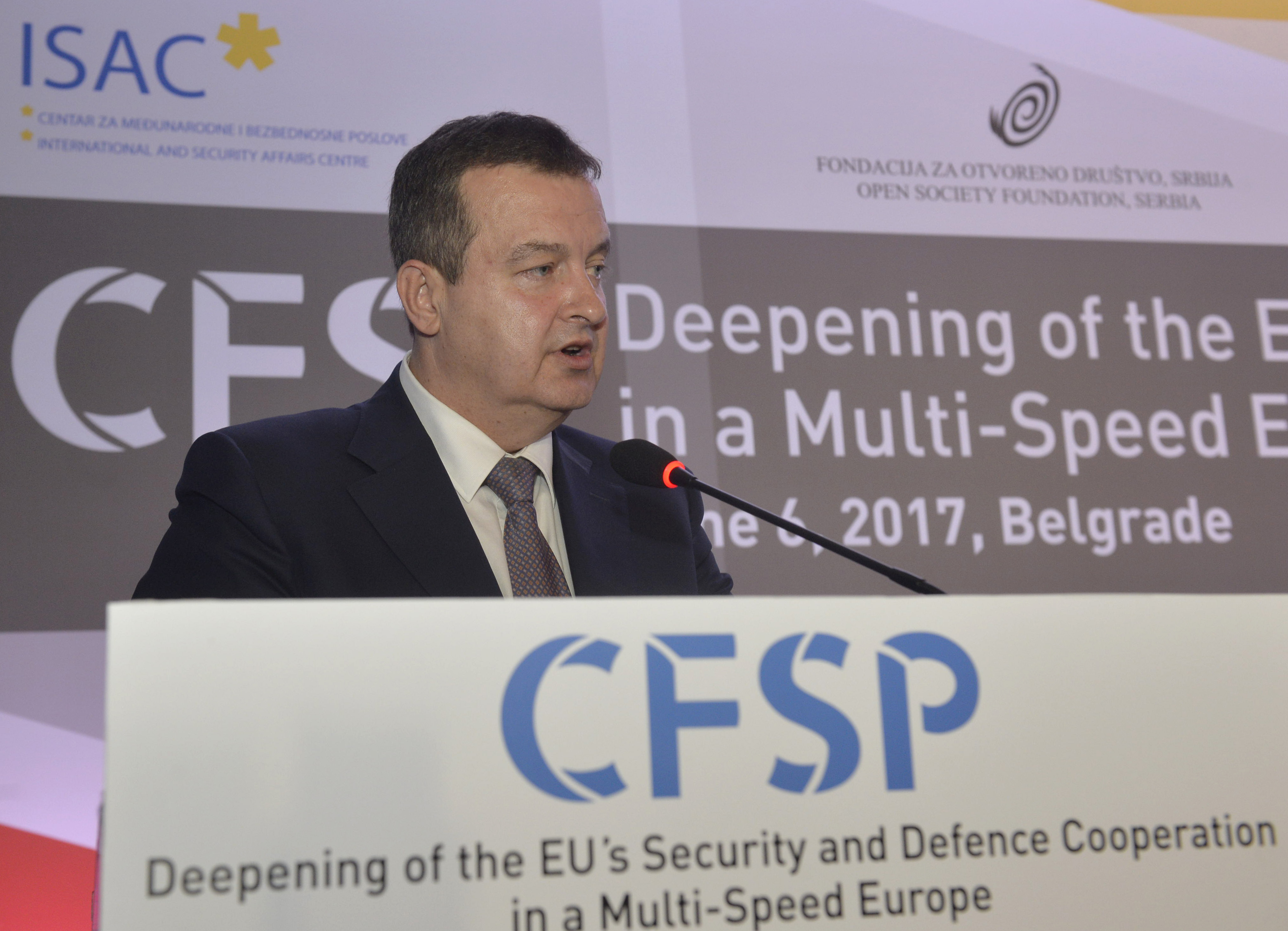 Ivica Dačić at ISAC Fund's conference; Photo: Tanjug/Rade Prelić
BELGRADE – Serbian Acting Prime Minister and Minister of Foreign Affairs Ivica Dačić said it would be extremely useful for the EU to include in the decision-making process and the preparation of strategic documents in the field of common foreign and security policy the countries that started membership negotiations.

Speaking at the conference “Deepening of the EU’s Security and Defence Cooperation in a Multi-Speed Europe” organised by the ISAC Fund, Dačić pointed out that Serbia has been waiting for three years to get from the European Union a report from the screening of Chapter 31, although the bilateral screening, which took place as early as October 2014, was evaluated as very successful.

To our great discontent, he added, the question of Serbia’s cooperation with the EU in this area is primarily viewed, and seemingly evaluated, through only one segment – Serbia’s siding with the decisions and declarations of the EU, in particular those concerning Russia.

That is also almost certainly the main reason why EU member states could not agree on the contents of the report, which has been under approval for already a year and a half, Dačić said.

He added that Serbia is faced with already defined decisions which it can only accept or reject, which it occasionally does, so our accession percentage in recent years stands at around 64% annually.

I think that, at this stage of our European integration and taking into account all the challenges we are facing, that is realistic, Dačić noted, adding that all decisions regarding the association are carefully weighed and balanced, taking into account our national interests.

Serbia is not in the position to join the decisions and restrictive measures relating to Russia and China, as permanent members of the UN Security Council, because our territorial integrity is threatened by the attempt of secession of a part of our territory and these two countries insist on the respect for international law.

We have the same attitude towards all the other countries that support us regarding Kosovo.

In that sense, our position is consistent, it has never changed, but in the meantime the position of the EU and of part of the international community regarding the Russian Federation has changed. Why? As they say, because of the respect for international law, which must be respected when it comes to Ukraine, but it seems it does not have to be respected when it comes to Serbia, Dačić said.

Hahn: We will open two new chapters with Serbia in June

Ederer, Dačić: Serbia most important partner of Germany in region