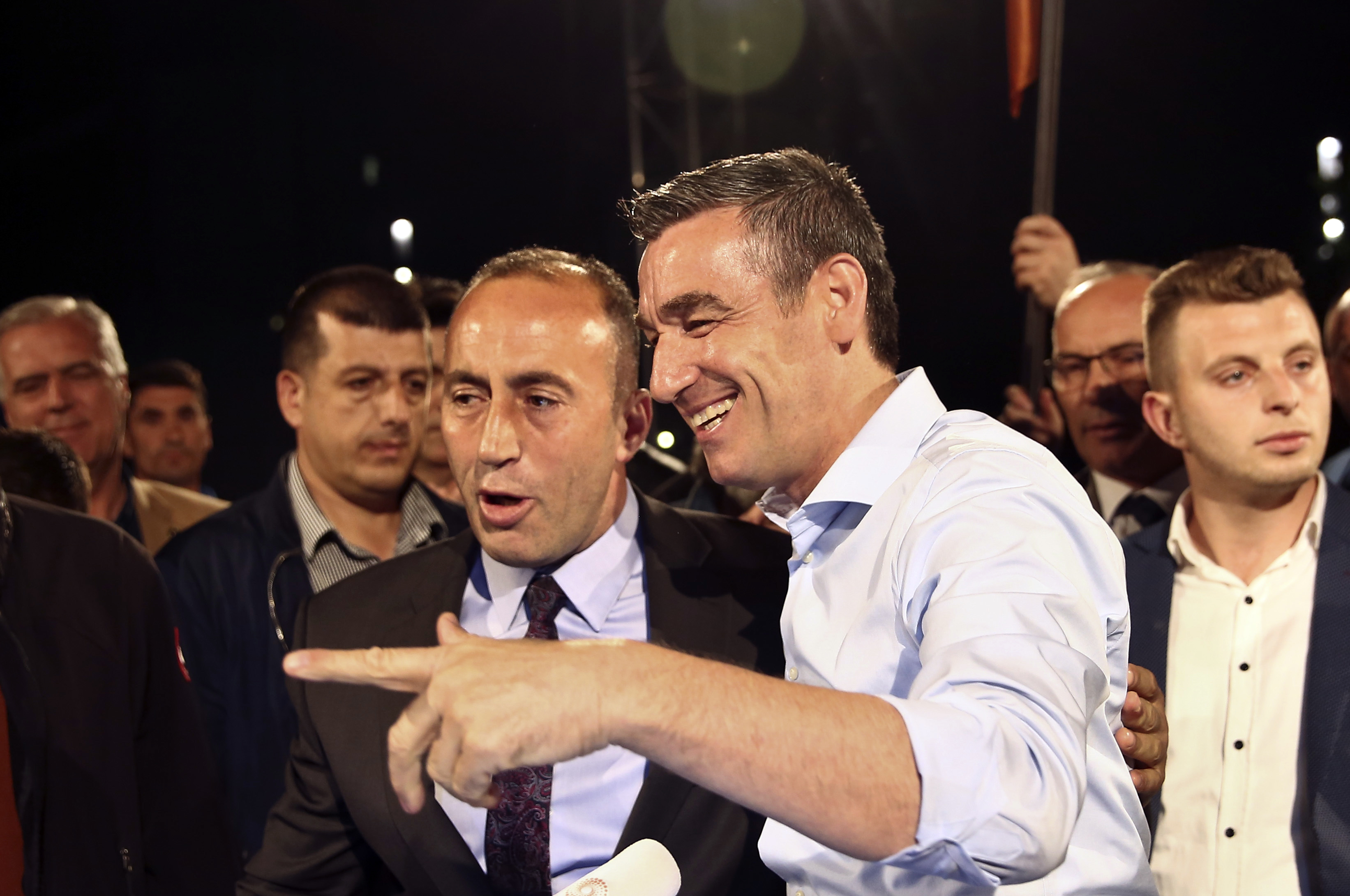 Article by Andrea Lorenzo Capussela, originally published at LSE’s EUROPP Blog and can be found on the following link.

Kosovo held parliamentary elections on 11 June. A coalition led by former PM Ramush Haradinaj won the election with around 35% of the vote, while the left-wing opposition party Vetevendosje and the coalition associated with outgoing Prime Minister Isa Mustafa each held around 25%. The backdrop to the election was an ongoing adjudication over war crimes committed by the Kosovo Liberation Army (KLA): Andrea Lorenzo Capussela explains that many politicians with a background in the KLA were keen to secure a government position to protect themselves from charges, and reflects on the success of anti-elite party Vetevendosje.

Most analyses of Kosovo’s election campaign (for instance, here, here, and here) suggest that the policy debate was quite superficial, if not downright empty, and that the only contender which credibly promised change was the controversial left-wing party Vetevendosje. This is hardly surprising given Vetevendosje is the only voice that does not represent the largely unaccountable, incompetent, and often predatory politico-economic elite that has dominated Kosovo for the past two decades.

This elite is joined by a common interest in preserving the extant governance system, which is unfair and inefficient, but which guarantees them considerable rents (suffice it to say that in 2010–12, one single procurement contract led to the diversion of public money amounting to at least 10 per cent of GDP). This is why, as I argue in my book on Kosovo, socio-economic conditions remain lamentable. But the vacuity of the campaign was due also to the fact that this early election was called far less because of policy differences among the erstwhile coalition partners, than because of tactical reasons, linked to the personal interests of the main segment of that elite.

The special court established under EU pressure to adjudicate alleged war crimes by the Kosovo Liberation Army (KLA) is likely to issue its indictments soon. It is widely expected to also target former guerrilla leaders who are now prominent politicians. This court, like those set up by the United Nations Mission in Kosovo and the European Union Rule of Law Mission in Kosovo (EULEX) before it, is by its very nature exposed to the influence of western powers.

Hence, it can safely be assumed that the potential suspects are less likely to be indicted if they are part of the governing majority than if they are in opposition, as western powers – the midwives of independent Kosovo and, de facto, still its guardians – are unlikely to be willing to decapitate its political authorities. Indeed, the risk of being indicted is one important reason why the leaders and political parties that have their origins in the KLA caused the elections to be called and then set their well-known rivalries and enmities aside to form a joint electoral list, which from the start seemed the clear favourite.

It is against this background that the main questions raised be the election were those linked to electoral fraud, during the vote, and a possible reshuffling of coalitions after it. For on 11 June, those former KLA leaders were seeking votes not just to govern the country, but also to avoid decades-long war crime sentences; and each can be assumed to be ready to switch sides if this might save them and throw someone else in the jaws of the special court.

In the 2009 and 2010 elections, election fraud was grave, widespread, and visible. To prevent it, Kosovo’s elite pledged to their own citizens and to the international community that they would reform the inadequate electoral law and vet the bloated voters list. Yet nothing was done. In the 2014 election fraud was less prevalent, apparently, and certainly less visible. But the inflated voters list, and the ease with which voters can vote with fake identity documents, suggest that this tactic might have at least in part replaced blunter instruments, such as ballot-stuffing. Equally notable is that hardly any of the thousands of cases of election fraud observed in these and other elections have ever been punished (confirming a pattern of systematic impunity for the crimes of the elite).

Media reports from the 2017 election highlight some possible cases of election fraud. For now, it is impossible to assess their foundation and gravity. What is certain is that, given their interests and incentives and their informal guarantee of impunity, the elite had no reason not to engage in election fraud, both between competing lists and within them. So my first comment is that it would seem imprudent, as it happened in 2014, to pass judgment on the quality of the electoral process without a careful and independent analysis.

The preliminary results attributed 34.6 per cent of the vote to the PDK coalition (the KLA list), 25.8 per cent to the list joining their opponents from within the ranks of the elite (the LDK-led coalition), and 26.7 per cent to non-elite Vetevendosje. If these results will be confirmed, Vetevendosje would have doubled its votes compared to the previous election, held in 2014. After that vote they seemed close to forming a coalition with two elite parties (which now stand on opposite sides). After a long stalemate that alliance collapsed.

One important reason for this outcome was the opposition of the international community, to which several policy positions of Vetevendosje were, and remain, unacceptable. The problem is less its left-wing orientation than its firm stance on certain sovereignty and ‘patriotic’ issues. I refer chiefly to its opposition to the EU-mediated dialogue between Belgrade and Pristina and the agreements it produced, which the West views as necessary to stabilise the region, and its long-term plan of uniting Kosovo and Albania, which could destabilise the region (primarily due to its repercussions on Macedonia’s fragile ethnic balance).

Vetevendosje’s surge in support – and its problematic traits

The paradox is that the Belgrade-Pristina agreements remain unimplemented, have become even more unpopular, and Vetevendosje doubled its support. Western powers might come to realise, in retrospect, that their 2014 interference in the democratic process was not just wrong in principle but also ill-advised (disclosure: I have often been in touch with Vetevendosje’s leaders)

It is true, however, that Vetevendosje has several problematic traits. In the past legislature it repeatedly resorted to tactics such as throwing tear gas in parliament, and its practice does have clear nationalist overtones, which often eclipsed its calls for cleaner and more responsive government. This is doubly regrettable, because thus far Vetevendosje’s administration of Kosovo’s capital, which it governs since 2013 with mayor Shpend Ahmeti at its helm, seems to have been relatively competent and transparent.

Given these results, both obvious coalition governments—either the KLA grouping plus all minority parties, or the KLA grouping plus Vetevendosje, in a patriotic alliance—have serious drawbacks. The first option would make Kosovo’s government politically dependent on Belgrade’s, which is believed to tightly control the main party representing Kosovo’s Serbian community, and might rely on too narrow a parliamentary majority. The second would throw much of Western policy on the Kosovo question up in the air, to the point that Western diplomats are again likely to prevent it, despite the counterproductive effects of their 2014 intervention.

The third option is for the two lists comprising the various political impersonations of Kosovo’s elite to join forces. Such a grand coalition would leave only Vetevendosje in opposition, however: a mistake that the elite is unlikely to commit, because it would make Vetevendosje the natural representative of all discontented Kosovo citizens, who are a growing majority (election turnout declined again, from about 42 to about 41 per cent).

Both lists are formed of three main parties, and are anything but cohesive. The alliances that underpin them could easily be broken and their components reshuffled, to produce a government that commands a wide enough majority and leaves some fragments of the elite in opposition (and vulnerable to the special court). This seems the most probable outcome, as it would be in the elite’s interest to regroup, after Vetevendosje’s remarkable surge. Yet the formation of such coalition might take time, and will be the result of negotiations that the faint-hearted may not wish to watch too closely.

So it is hard to be optimistic about the prospects of Kosovo’s material and democratic development, for all solutions that exclude Vetevendosje would mean continuity.

Vetevendosje and the West should end their quarrel: both would benefit

In 2014, days after the two main parties of the elite formed a coalition government, some 5-7 per cent of the population literally fled the country, to migrate illegally in the EU. This time it is to be hoped that the reaction of dissatisfied citizens will be to begin exercising pressure for more responsive government. With the possible exception of Vetevendosje, however, Kosovo lacks grassroots organizations capable of organizing citizens’ collective action. In these circumstances, citizens’ discontent is unlikely to produce much more than disorderly protest.

Kosovo’s prospects would improve, conversely, if Vetevendosje and Western diplomacies would end their quarrels. Both would benefit from it. One might choose to shed its irresponsible tactics and patriotic-nationalist inclination, to devote more energy to defence of democracy, the rule of law, and the public interest. The other might discover that these things are in their interest too, and free themselves from the eternal blackmail of Kosovo’s gravely inadequate but seemingly irreplaceable elite.

Conference “Serbia and the European integration of the Western Balkans”