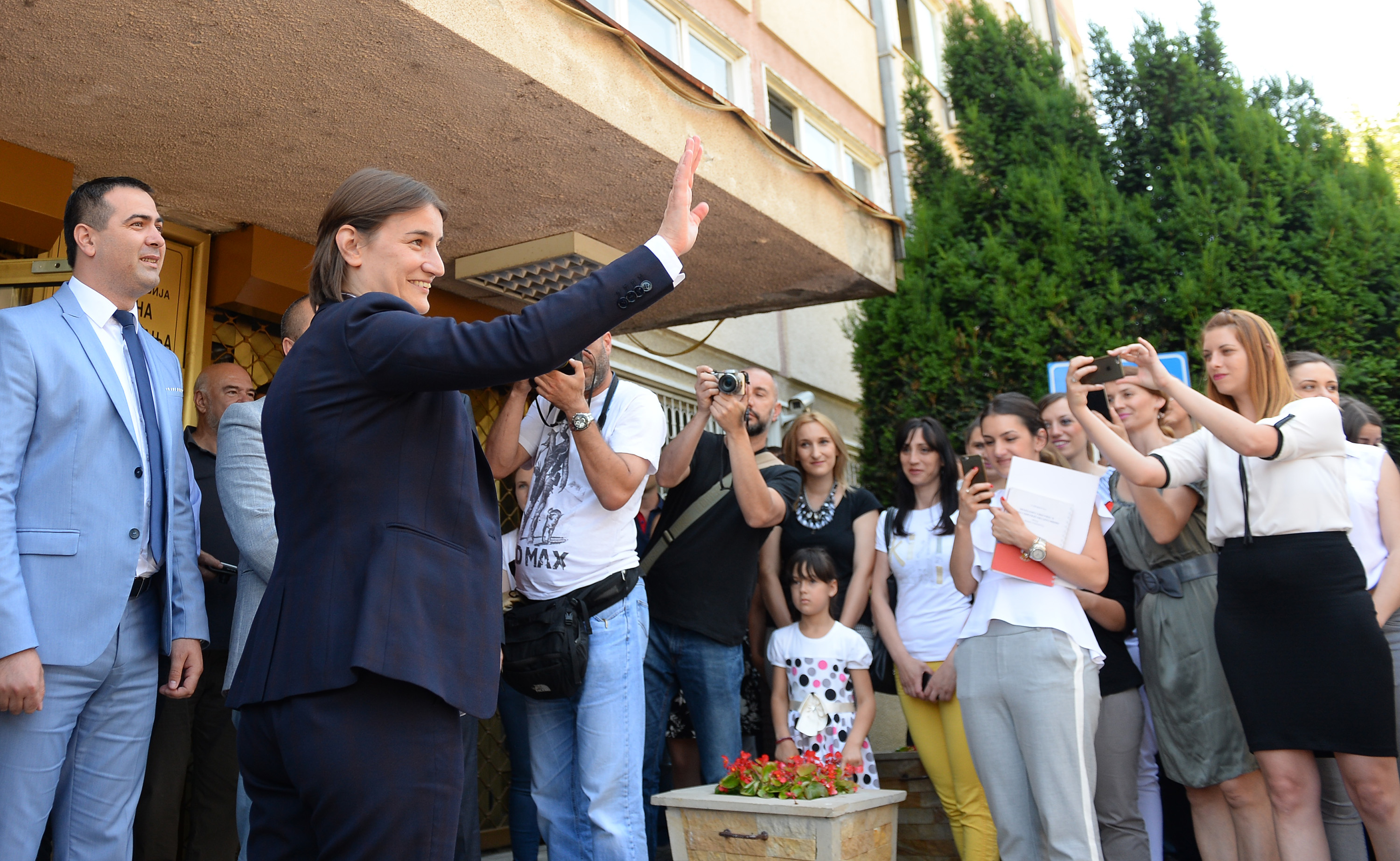 Serbian President Aleksandar Vučić has nominated Ana Brnabić as the country’s next Prime Minister. Brnabić, whose appointment is now largely a formality, will be Serbia’s first female and openly gay Prime Minister. Koen Slootmaeckers argues that while many observers outside the country have portrayed the appointment as a step forward for LGBT rights in Serbia, the decision says far more about Vučić’s attempts to advance the country’s EU accession process.

As the BBC put it, “Just a few years ago, the appointment would have been unthinkable. But EU hopeful Serbia can present it as proof of increasing tolerance.” And although the BBC remained cautious in its interpretation of the political meaning of the appointment, its local correspondent, Guy De Launey, argued that the symbolism of Brnabić’s appointment carries real weight. Whilst the EU has not yet formally commented on the developments, one can anticipate Serbia will be commended for their progress on LGBT rights. Indeed, already on Friday, the European Parliament Intergroup on LGBTI Rights, shared the news on its Facebook page as “Wonderful news from Serbia”. However, should we really consider the appointment as proof of the progress made in Serbia? When the appointment is placed in its full context, the answer is arguably no.The news that Serbia is set to have its first openly gay and female Prime Minister has generated a response from the global LGBT community and Western media that can best be described as ecstatic. As the news developed on the evening of 15 June, my Twitter and Facebook feeds were overwhelmed with people congratulating Serbia for this ‘historic’ appointment: a double first for the county. Many media outlets noted that given less than a decade ago the 2010 Pride parade in Serbia was marred by riots, the appointment of Ana Brnabić demonstrates remarkable progress for the country.

I would not wish to claim that the appointment of an openly LGBT person as Prime Minister has no positive implications for LGBT people in Serbia. One can optimistically imagine, for instance, that it sends a message to LGBT people that they can make it professionally in Serbian society even if they are open about their sexuality. But it is important to be cautious with such interpretations, particularly if we are to take these political developments as proof of Serbia’s progress from a country where less than a decade ago LGBT people were beaten on the streets while organising a pride parade.

Indeed, rather than taking this development at face value and considering it as a sign of Serbia’s progress in LGBT rights, the appointment of Brnabić is a continuation of Serbian President Aleksandar Vučić’s politics of tactical Europeanisation. Under this approach, LGBT issues are used to speak to the EU’s self-proclaimed LGBT-friendly identity without engaging with LGBT issues domestically.

In the past, and again with the appointment of Brnabić, international observers have often responded to small improvements in LGBT rights with great enthusiasm, as if every small step taken in the Serbian context towards the protection of LGBT people represents a major shift in the country – moving from backwards and homophobic to modern and LGBT friendly. Such a superficial reading not only reifies a problematic East-West dichotomy, but more importantly, it hides the underlying politics in which LGBT rights have been instrumentalised by the Serbian government to guarantee and advance Serbia’s progress in the EU accession process.

Indeed, the latest developments are merely a continuation of existing practices in Serbian politics regarding LGBT issues. My research on LGBT rights in Serbia has shown that advancements in the protection of LGBT rights are to be read against the context of Serbia’s EU accession process, as ‘homonationalist’ moves to demonstrate Europeanness without engaging with the lived experiences of LGBT people in Serbia.

The tactical use of LGBT rights becomes even more visible when one considers the Pride Parade events. When Pride reappeared in Belgrade in 2014, this was done with an eye on the political capital the government would gain by successfully protecting such events (as shown here and here). The return of Belgrade Pride is best understood as what can be labelled ‘tactical Europeanisation’, i.e. an act of compliance to communicate to the EU a readiness to Europeanise by aligning oneself with certain ‘European norms’. International observers have treated Pride as a litmus test for Europeanness and the protection of the 2014 and subsequent Belgrade Prides were aimed largely at advancing the EU accession process.For example, consider the anti-discrimination legislation which was adopted in 200as part of the EU visa liberalisation process. Despite being in place for almost a decade, the implementation of the law remains minimal. Here, the lack of political engagement and will to stop the discrimination of LGBT people is a significant barrier to the implementation. My research has shown that the institutions which are responsible for protecting citizens from discrimination (the ombudsman and the commissioner for the protection of equality) often face indirect political pressure to speak out on the topic, but not to pursue politically sensitive cases. The country’s anti-discrimination strategy (2013) and action plan (2014) remain under-implemented and little is being done to improve court practices regarding anti-discrimination cases or to improve treatment of LGBT victims by police officers. Tackling the roots of hate crimes and discrimination remains a topic that is low on the political agenda.

This being the case, the uncritical engagement of international observers with Serbian LGBT politics has done a great deal of harm. While Serbia was widely commended by international observers for holding Pride events, the Pride parade itself has been ‘co-opted’ by the state, making it a ritual march void of local LGBT politics. Indeed, Vučić – who described Pride as a leisurely walk – used the event to emphasise the state’s (or his) power and sovereignty. The militarised nature of the Pride parade transformed it into a ‘Ghost Pride’, i.e. a state tolerated manifestation of Pride which takes place in a militarised ‘transparent closet’ that keeps LGBT people’s visibility strategies invisible and outside the public sphere.

The appointment of Brnabić represents a similar instrumentalisation of LGBT issues to distract international observers from what is actually happening. Several elements of the recent developments suggest that the new PM might not have a significant impact on LGBT lives in Serbia. First, there is the fact that although Brnabić is appointed as Prime Minister, Vučić reportedly clarified that she would only lead the technical working of the government, while the current acting Prime Minister Ivica Dačić – known for his homophobic statements – is set to oversee the political workings of the new cabinet. Such a division of labour makes it relatively unlikely that the government will take tangible actions to improve LGBT people’s lived experiences. In fact, it is quite likely that Brnabić will become a shield for EU criticism on Serbia’s LGBT record. And in all likelihood, the EU will fall for it, as how can one perceive a country with a gay Prime Minister to be homophobic?

Aside from the international politics underlying the appointment, there is little hope that the new Prime Minister will improve the lives of LGBT people in Serbia. Although she may be a suitable role model for the country’s LGBT population, it is doubtful whether she will have a significant impact on wider attitudes towards LGBT people. In fact, the comments made on Brnabić’s sexual orientation, both by herself and Vučić, might actually reinforce the commonly held opinion that any discussion of sexual orientation should be kept “within four walls”.

Consider, for example, the statements made when Brnabić was first appointed as a minister last year. At the time, Vučić said that he was only interested in her results and that “her personal choices” do not interest him. Similarly, she commented on the commotion around here sexuality by saying: “Hopefully this will blow over in three or four days, and then I won’t be known as the gay minister.” Although I do not want to claim that Brnabić’s sexual orientation should be made the central point of discussion, the constant displacement of it to the private sphere does not help in overcoming the stigma that exists in Serbia around LGBT issues.

Against this background, the appointment of Brnabić should be welcomed with some healthy scepticism and should not be taken as more than it is. It is a politically symbolic appointment, but we should wait for concrete achievements on the ground before we conclude that Serbia has made progress in protecting LGBT people. I would urge those observing Serbia from a distance (also those within the European institutions) to listen more closely to individuals who have been engaged in analysing Serbia’s politics in greater detail. Indeed, many of those with greater proximity to the topic have argued that appointing Brnabić not only contributes to the further consolidation of Vučić’s semi-authoritarian power, but also serves as a smoke screen to divert attention away from the increasing democratic backsliding within the country. Hopefully the coming months and years will prove this scepticism wrong, but it is about time international observers realise that symbolic politics are just that, symbolic.

Koen Slootmaeckers is a PhD Candidate at Queen Mary University of London.

Facilitated dialogue between Belgrade and Pristina