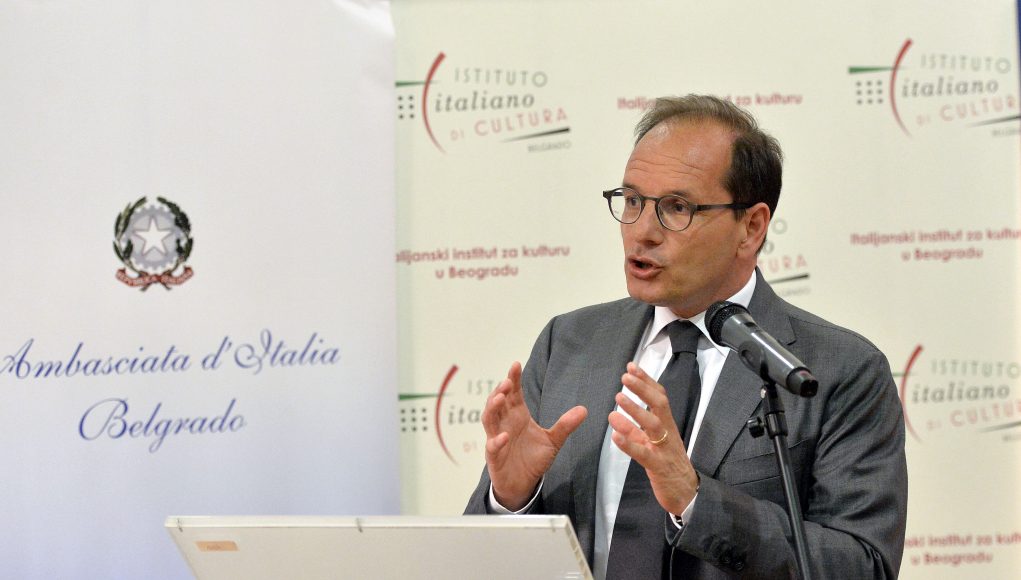 Interview with Giuseppe Manzo, the ambassador of Italy to Serbia, conducted ahead of the Western Balkans Summit and the Civil Society Forum in Trieste, which will be held on 11-12 July 2017.

European Western Balkans: What will be the focal points of the Trieste Summit and what do you expect to be its outcomes?

Giuseppe Manzo: First of all I would like to emphasize that the very choice of the city of Trieste as the venue of the forthcoming Summit of the Western Balkans is an acknowledgment of the pivotal role that this region plays for my country. Next 12th July in Trieste, Italy wants to send a clear message of concrete support to the cooperation among the countries of this region with a view to their accession to the European Union. We will do this by gathering in Trieste not only government representatives but also entrepreneurs, youth and civil society representatives from all over the region and from those EU countries that, like Italy, pay attention to and are close to the needs of the citizens of this area. Regional economic integration, transport and energy interconnections, youth cooperation and the promotion of the rule of law will be the key issues on the agenda of the Summit.  We are confident that in Trieste important decisions will be taken to foster more regional integration not only at the political level but also to address concrete priorities of the communities in the region as it is the case for the signature of the long-awaited Transport Community Treaty and the establishment of the Western Balkans Chamber of Commerce Secretariat in Trieste, which will bring more economic growth and development for the region.

EWB: How do you see the future of the Berlin Process? What are your thoughts on the so-called “Berlin Plus”?

GM: The future of this Process is pretty clear. The significant deliverables we are going to achieve in Trieste, including additional EU funding on selected regional infrastructural projects, would need further implementation in the next years and their progress will be monitored by the participating countries. In this regard, the Western Balkans Process is conceived as a fundamental tool both to support the EU integration path of the Western Balkans and to encourage more intra-regional integration and exchanges among the involved countries on specific policies. The key is and will always be a continuous engagement from the EU and the Western Balkans countries for a mutually beneficial cooperation within the EU family.

EWB: Taking into the account the fact that Italy is one of the key economic partners of Serbia, what are the priorities of your work in Serbia as the Italian Ambassador?

GM: With Italy being ranked as the first foreign investor for the last 16 years and the second trade partner of Serbia with around €3.7 billion of trade exchange last year, I have to admit that my daily work to promote new business opportunities for the Italian companies in this country and to further improve the bilateral economic cooperation is challenging and rewarding at the same time. Italian investments in Serbia are a visible and tangible presence in the automotive, banking, insurance, agroindustry and clothing sectors, providing jobs for more than 26.000 employees. Among the priorities of the Italian economic diplomacy there is of course the support to the more than 600 Italian companies being present here and the steady commitment to find new opportunities of growth for Italian companies who are interested in investing and expanding their activities abroad. Many of these opportunities are linked to the funding programs offered by the European funding, which is by far the largest donor, the largest investor and the largest trade partner of Serbia. The Embassy has recently developed a quick guide for Italian entrepreneurs on how to find and access these crucial programs.

EWB: How would you asses the current state of Serbia’s negotiations for the EU membership?

GM: Having opened 10 out of 35 chapters, included the most politically sensitive ones such as those related to the judiciary, fundamental rights and the dialogue with Pristina, I think that Serbia’s EU accession path is so far quite satisfactory. Of course, the EU negotiation is a process and, by definition, a process takes time but its pace is mainly in your hands depending on your capacity to reform the country according to the EU standards. It is equally important to emphasize indeed that the accession negotiations are not a process end in itself that Brussels imposes as a condition for joining the EU, but are the most useful and powerful tool for reforming the country within itself in the interest of all citizens who are direct beneficiaries. We expect this process to continue with even greater determination and effectiveness for the well-being of citizens now that a new Government is fully in office. Serbia can always rely on the most convinced support of Italy along its path towards the EU.

EWB: What do you see as the key obstacles in this process? Is it the Belgrade-Pristina Dialogue, the rule of law or something else?

GM: It is not a matter of obstacles because the EU accession is not an hurdles race. As I mentioned right before, this process is meant to provide a unique opportunity to reform your society from the inside and by catching up with the standards of the most advanced Western democracies. Indeed, it goes primarily to the benefit of the Serbian people when your Government keeps its strong commitment to the EU process, working on key issues such as having a more efficient rule of law system or better standards in education, environment and agriculture. It is equally important for Belgrade to keep pursuing its regional cooperation policy, starting with a renewed engagement in the dialogue with Pristina. Serbian citizens will be the one to enjoy a region more integrated and politically stable and where it is easier to travel and trade.

EWB: How much is the regional stability important for Italy? What do you think about bilateral issues in the Western Balkans and how Italy can help the countries of the region to solve them?

The Balkans history always reminds us that stability is an asset to be preserved with all our power because the instability of neighboring countries soon becomes our own. Stability and cooperation in the region are at the same time a premise and an indispensable goal for anyone wishing to accompany this part of Europe to a sustainable path of economic and social growth, having in mind the ultimate goal of the integration of the Balkans into the EU. In this perspective, Serbia demonstrates its ability to play a crucial role in contributing responsibly and constructively to maintaining peace and stability in the region. Italy and other major international partners of Belgrade greatly appreciate Serbian commitment to the stability of the Balkans and encourage Serbia to continue in its commitment. Italy is also doing its part favoring the dialogue in the region through the Trilateral initiative we launched together with Serbia and Albania and of course within the Western Balkan Process which we are chairing this year.

Zaev presents the 3-6-9 plan: Fast reform package for a recommendation and negotiations with the EU