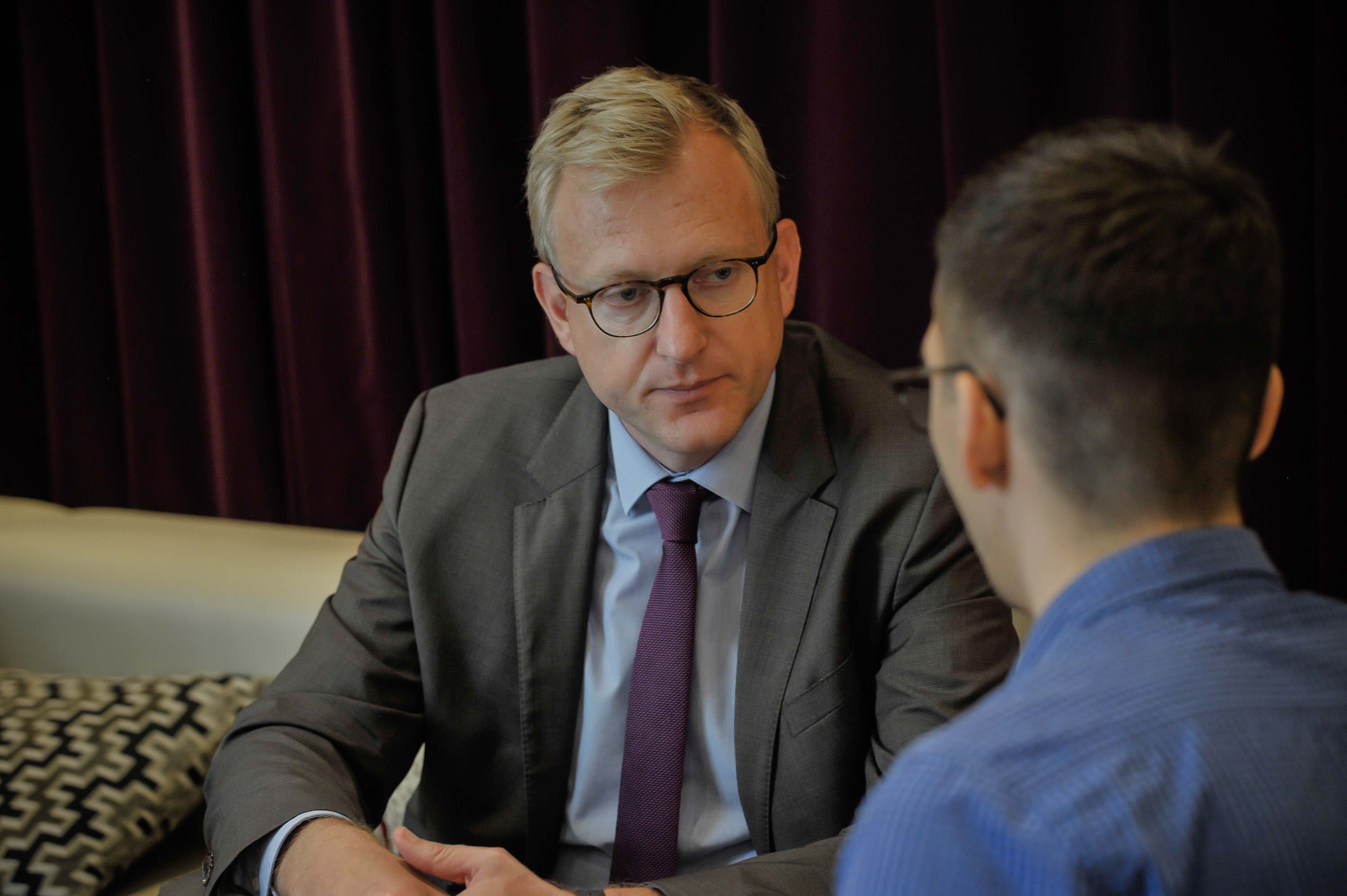 European Western Balkans spoke with Steven Blockmans, Senior Research Fellow and Head of EU Foreign Policy at Centre for European Policy Studies – CEPS, a Brussels-based think-tank, and Professor of EU External Relations Law at the University of Amsterdam. We spoke on security challenges in the Western Balkans, European integration of the region, and on the state of democracy in the Western Balkan countries.

European Western Balkans: How would you assess the current situation in the Balkans regarding security? What are the key security challenges in the region?

Steven Blockmans: Hair-raising domestic rivalries and conservative nationalist forces have recently threatened the fragile political balance in countries like Bosnia and Herzegovina, Kosovo and Macedonia, to the extent that commentators in the West have started to make historical comparisons with the early nineties. I am not of the opinion that these comments are warranted, but the very fact that serious people entertain such thoughts is a worrying indicator of the perception of security and stability in the region. Some politicians in the Western Balkans indeed play with fire. External forces, like Putin’s Russia and Erdogan’s Turkey, fan the embers. They play on their countries’ soft power, for instance with illusions of Slavic brotherhood, to which regional strongmen like in Serbia respond, even with troops engaged in military exercises with Russia and Belarus. This example shows that the strategic political and economic direction of Serbia may be at odds with its military posturing, thereby adopting an inherently unstable position of supposed nonalignment.

EWB: In the process of the accession to the EU it is expected that a country aligns more with the EU’s CFSP as time flows. We have an opposite situation in the case of Serbia. How do you see it? Do you think that the balancing between West and Russia is sustainable in a long term?

SB: For Serbia, I do not think it is sustainable in the long-term. Its strategic interests are not just a military or security question but is also defined in socio-economic terms. 80% of Serbia’s trade is with the EU. Any moves at non-alignment or betting on two horses is counterproductive to the strategic aim of joining the EU, and simply results in further delays on the pre-accession track. Serbia would be better advised to align itself with the EU’s Common Foreign and Security Policy. Of course, this requires political courage.

SB: We have recently seen a regression in the fields of free media and transparency. The complete overhaul of the judiciary has not been an undisputed success either. Public procurement remains problematic and levels of corruption are still worrying. One can only hope that engaging in Chapters 23 and 24 will have a beneficial effect. But as far as the rule of law and separation of powers are concerned, the revolving door politics of Mr Vucic have raised constitutional questions. The choice for an openly gay prime minister may score well internationally but could create further divisions domestically. It will not take long for external observers to realise that the move was intended to consolidate de facto power in the position of the President.

EWB: There are voices from the European Parliament and European CSOs asking the European institutions and officials to clearly condemn those tendencies. What do you think, is the EU more interested in stability in the region or it favours democratic principles more?

SB: In general terms we have seen a certain re-direction in EU foreign policy, with the 2016 global strategy tilting towards more “principled pragmatism”, i.e. an approach in which the traditional insistence of the EU on respect for human rights and democratic principles are balanced out with other interests, be they of security nature or of an economic nature. There is a certain weakness towards the pre-accession countries that has crept into the role of the EU Commission in monitoring the core values of the EU and speaking out in case of need. This is partly a reflection of illiberal tendencies within the EU itself, in Hungary and Poland for instance, which the supranational institutions have had difficulties to grapple. But whatever the reason, this is detrimental to the credibility of the EU and its enlargement policy. Just like I would have expected that DG NEAR and Commissioner Hahn to speak out more openly in defence of the liberal values in Gruevski’s Macedonia, I expect him to speak out in defence on the same values on which the EU is based in the case of Serbia. If not, then the EU simply colludes with the self-styled counter-revolutionary strongmen of today, and places itself outside of the power equation. Just look at the Commission’s and Council’s position vis-a-vis EU candidate country Turkey, where a codification process towards autocracy is taking hold, in clear violation of the political criteria for membership. Accession talks with Turkey should not simply be suspended, like the European Parliament wants, but terminated. That is the language which illiberal leaders understand. I am not suggesting that Serbia is quite to that stage, far from, but it is on a slippery slope. To me, it seems that European Commission has not learned its lessons from the Macedonian and Turkish examples. This is bad, not just for the countries in Southeast Europe, but also for the EU.

EWB: Do you see those tendencies in other countries in the region? What do you see as key challenges for other Balkan countries?

SB: I have mentioned Kosovo, which has recently seen a political backlash, and Macedonia, which has now hopefully turned the corner. The new government is taking a very proactive approach at clearing the hurdles which have blocked progress for the country. My worry is that it may be running too far ahead of the troops.

Bosnia and Herzegovina remains a basket case as far as constitutional arrangements and governance structures are concerned. These are untenable and need to be revisited, but there is no international political capital to support revisiting Dayton.

In Montenegro, we have seen a lot of political tussles, wobbly institutions and an assassination attempt on the prime minister. Corruption runs high and is obviously contrary to the fundamental value of good governance.

Some of these problems pertain to Albania as well, with political boycotts by opposition parties in the parliament. Let’s hope that cooler heads prevail in the wake of the recent general elections. It is telling for the state of the EU’s enlargement policy that this country should be deemed as one of the better “pupils in the class”, mainly because of its economic performance.

In short, there is a certain pattern which has emerged over the last couple of months which is worrying.

EWB: Elections is Kosovo were held recently and Serbia got a new government. How do you see the continuation of the Belgrade-Pristina dialogue?

SB: One only hopes in a renewed spirit of cooperation, but it is true, some of the recent statements have not been beneficial to that extent. I would expect the EU High Representative Federica Mogherini to take a firmer lead again on managing the facilitated dialogue. There have recent talks in Brussels – at Presidential level, so let’s hope that some basic trust is being restored.

EWB: One of the key topics today in the EU is Multi-speed Europe. Is there place for Balkan within such Europe? How do you expect that the Western Balkan countries will join the EU – together or individually?

SB: Multi-speed Europe has always existed, for instance with the Schengen area and the Eurozone. It may now further develop in the field security and defence, thanks to the political momentum generated by a combined effect of Brexit and Trump. Yes, I would suspect that there are possibilities for the Western Balkan countries to individually or collectively cooperate in some of these differentiated integration modes.

One would be on the free movement of persons. The Balkans are geographically located within the EU.

Part of the solution to the refugee and migrant crisis lies in stronger cooperation between the EU and the Western Balkan states. Schengen, in particular, is an area where third country involvement is already a reality (cf. Norway and Iceland). It is not impossible to think that in a not too distant future the Western Balkans states that already benefit from visa-free travel, with an upgraded border security management and systems would be able to participate in such a differentiated integration mode as well.

As far as the speed of EU enlargement is concerned, the EU Commission rightly sticks to its merits-based approach in making sure that individual countries meet the conditions for membership at their own pace and on the base of their ownership of the process. At this stage, it is too early to tell whether the remain Western Balkan countries will join together or individually.

EWB: There is an initiative for creation of a common Balkan market or custom union which is coming from Belgrade and which is praised by Commissioner Hahn. On the other hand, Montenegro’s officials are clear that they are not interested in such projects. Do you see those initiatives as a substitute for the integration into the EU?

SB: I understand where the initiative comes from. Borders should matter less when you are joining the EU. It is logical that regional cooperation moves forward as it gradually allows those states to comply with the rules on which the single market is based. From that perspective, Montenegro’s rejection is wrong and should be adapted, but by the same token it is premature to talk about an internal market for the Western Balkans. It may create negative perceptions among citizens that the economically stronger of the Western Balkan countries will dominate such a market and that the collective future integration with the EU is delayed. If you look at the functioning of the energy community, which is a sectoral integration of the EU with a host of neighbouring countries, then certain deficiencies have been revealed. Lesson should be learned from such experiences before any new initiatives are being launched.