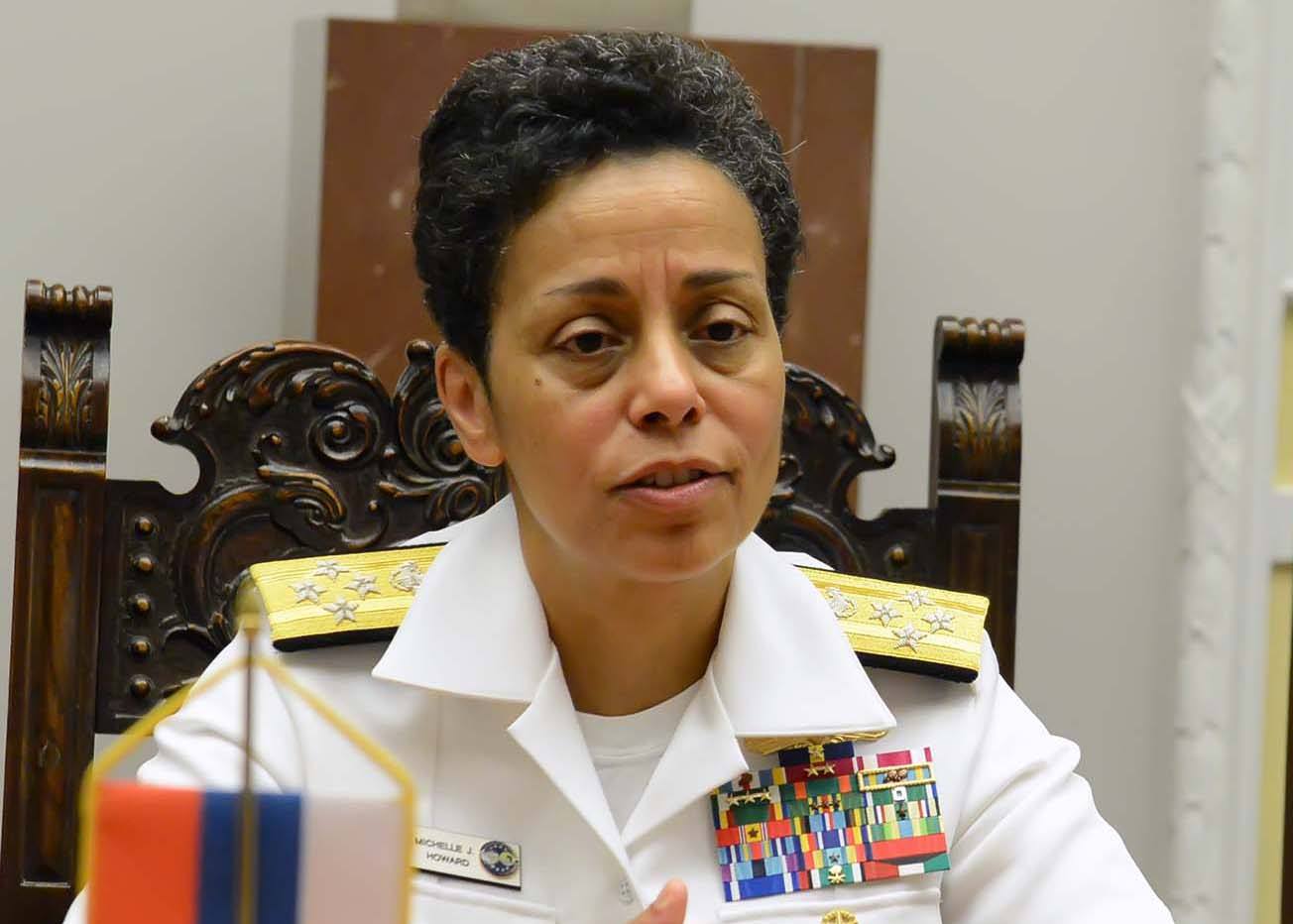 Michelle Howard; Photo: Ministry of Defence of the Republic of Serbia

Admiral Michelle Howard became the first African American woman to command a ship in the U.S. Navy in 1999. Today she serves as the commander of Allied Joint Force Command in Naples.

What is the importance of integrating the gender perspective in the military, why women play the key role in every successful NATO operation and on which way women can contribute in resolving issues in the region, European Western Balkans spoke with admiral Howard. Aside from the talks she had with the representatives from Serbian institutions, Howard met several successful women in the field of politics, civil society and media.

European Western Balkans: What is the reason for your visit?

Michelle Howard: I’m here in Belgrade to enhance the military to military cooperation and partnership between NATO and Serbia. To that end, I’ll be calling upon several leaders within the Ministry of Defense and Ministry of Foreign affairs here tomorrow to talk about mutual points of interest.

The NATO Military Liaison Office in Belgrade (MLO) assists the Serbian authorities to further conduct the ongoing defense reform, enables the country to participate more effectively in the Partnership for Peace program within the framework of the Individual Partnership Action Plan (IPAP), and provides support for NATO’s public diplomacy activities.

EWB: What is your objective in this women’s meeting?

The women here tonight are highly successful Belgrade-area women leaders. I’m excited to discuss how we can contribute to solving this region’s challenges with the unique perspective our gender provides.

Women comprise roughly 50 percent of the global population.  In the disciplines of defense, development and diplomacy, we must approach challenges comprehensively by thinking of the whole of the population, including women.

Women comprise some 18 percent of my service, the U.S. Navy.  Women are a part of all NATO militaries. We include women’s perspectives in military planning because we know their perspectives contribute to improved outcomes in military operations. We know that a key indicator of a successful military operation is when women in an affected society are able to conduct their traditional daily tasks with confidence, and without fear.

EWB: What is the value of gender perspective to NATO?

MH: NATO and its partners are committed to removing barriers for women’s participation in the prevention, management and resolution of conflicts and in peace-building, and to reducing the risk of conflict-related and gender-based violence.

At the 2014 Wales Summit, Allied leaders acknowledged that the integration of gender perspectives throughout NATO’s three essential core tasks – collective defence, crisis management and cooperative security – will contribute to a more modern, ready and responsive NATO.

Gender is an important focus of NATO’s cooperation with other international organisations – in particular the United Nations – and civil society. NATO is also taking action within its own organisation and structures to promote gender equality and the participation of women in all activities.

EWB: Serbia declared military neutrality 11 years ago. Regarding the fact that nowadays almost all Serbian neighbours are in NATO or tend to join NATO, from your point of view, is Serbian neutral position sustainable in the long term?

MH: NATO fully respects Serbia’s policy of military neutrality. It is entirely up to Serbia to decide what kind of relations it wants to have with the Alliance in the future and we will always respect your decision.

EWB: Having in mind that Serbia would probably join the EU in next few years, how do you see the cooperation between Serbia and NATO in the future?

MH: NATO and EU are complimentary international organizations.  Many countries are members of both. From a military perspective, I find membership in one or both a good thing.

NATO has a solid relationship with Serbia through the Partnership for Peace program, based on mutual respect, confidence, and cooperation.

I am confident NATO will continue to pursue a healthy relationship with Serbia, including the Individual Partnership Action Plan. Our NATO Military Liaison Office here in Belgrade is having a role in facilitating the implementation of that plan.

EWB: The latest survey by the Centre for Security Policy published this year showed that less than one in ten citizens favour NATO membership. What should Serbia or NATO do to change the way how citizens see the possible Serbian membership?

MH: NATO is an alliance founded on democratic values and the rights of individuals. We respect the choices of the Serbian government and the people. However, by joining NATO Partnership for Peace Program, Serbia has shown that in order to maintain a secure and stable environment in South East Europe, NATO is needed to preserve the conditions that sustain prosperity.

With Serbia’s participation in the Partnership for Peace Program, we can enhance the necessary interoperability for participation in EU and UN missions.  NATO has a number of self-determined neutral partners, including Sweden, Finland, Austria, Ireland and Switzerland who are deeply engaged in Partnership for Peace activities. We already conduct several exercises a year with Serbia military and we stand ready to further develop our relations with Serbia.

EWB: Major General Giovanni Fungo said that the situation in the whole region is fragile and unstable. What are the main reasons and how do you see the role of KFOR in maintaining the stability?

MH: We are keenly aware of the tensions in the region and we rely on KFOR’s real-time assessments of the dynamics on the ground in and around Kosovo.  KFOR will continue providing safety and secure environment and freedom of movement for all. We will retain a flexible, deterrent presence, and will make changes only when the security situation allows.

KFOR continues to support a peaceful, stable and multi-ethnic Kosovo, with a force of around 5,000 soldiers who are capable of quickly responding to any security challenge. NATO is committed to supporting the implementation of the Belgrade-Pristina agreement and our intention is to maintain our current troop levels for the coming months. NATO’s goal is to keep moving towards a smaller and more flexible KFOR troop presence, but this decision will be guided by the evolving situation on the ground.

KFOR has developed excellent cooperation with the Serbian Armed Forces. KFOR and SAF are working together along the Administrative Boundary Line (ABL) to ensure a safe and secure environment, in mutual trust and full confidence.

The ‘Berlin Process‘ for the Western Balkans– Is it delivering?